Kill the G.I. Joes as revenge for humiliating him

Find and assassinate Waldo (both succeeded)

Calvin was voiced by Breckin Meyer, who has also voiced other characters in the series, such as Jokey Smurf, Munson, and Skeeter.

The G.I. Joes welcome their newest member Calvin. At first, Calvin looks forward to joining the team. He introduces himself by saying he graduated from the top of his sniper class at West Point. After Calvin suggests possible code names for himself, he accidentally slips by opening a can of beer. The entire team laughs at the accident. Flint comments by saying "Looks like someone had an accident." Gung-Ho adds to the humor by saying "Way to go, Fumbles". The G.I. Joes decide that Fumbles is Calvin's new code name. Calvin protests but slips on the puddle of spilled beer. Seconds later, the team heads out to destroy their sworn enemy COBRA. The G.I. Joes' leader, Duke, tells "Fumbles" to clean up the mess.

Angered, Calvin quits the team and decides to join COBRA. The leader, Cobra Commander, welcomes Calvin with a much friendlier greeting. He decides to nickname Calvin as Trouser Snake. At this point, Calvin no longer cares about the code name given to him. On the battlefield, Calvin is assigned to kill the G.I. Joes. He begins by using his sniper rifle to shoot General Hawk's head from a very long range. Calvin shoots the other G.I. Joes who are greatly confused by the long range shots they're unable to even hear due to the great distance he's away from them. Flint tries to get behind a tank but his throat is shot. Gung Ho begs for mercy but he is still killed. During the ambush, Calvin takes joy in killing the people who humiliated him. Duke is the only G.I. Joe left. He begs to be shot in order to go down with his team. Calvin decides to spare Duke and let him live with the defeat. Cobra Commander is impressed and says "Good job, Trouser Snake". Calvin responds by saying "It's Fumbles. It was always Fumbles". He then leaves the battlefield with COBRA.

Calvin is using his rifle to assassinate Waldo in a market place. After twelve seconds of searching, Calvin finds Waldo. He kills his target which causes the other people to flee in terror.

Calvin shoots General Hawk in the head from so far away, nobody hears the shot. 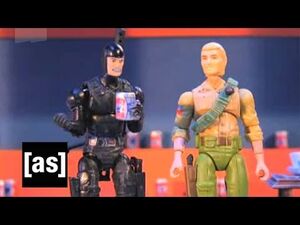