The Hunter of Souls

To kill anyone who gets in her way.

Calypso is a villain who is an enemy of Spider-Man.

Calypso was created by the late Dennis O'Neil and Alan Weiss.

Calypso Ezili was a voodoo priestess. She was a psychopathic woman who was associated with Sergei Kravinoff. Calypso seemed to enjoy driving Kraven into fits of rage and furthering his hatred of Spider-Man, which ultimately led to Kraven's suicide in the Kraven's Last Hunt story line.

After the mutation, he then changes his name to 'Kraven the Hunter' and goes after Spider-Man. With his new form, he easily outruns and overpowers Spider-Man several times throughout their fight (actually forcing Spider-Man to use up all his web fluid against him) and only being narrowly subdued after being tied up with most of Spider-Man's webs. After his second defeat, Kraven is rescued by Calypso on behalf of the Master Planner who asks him if he would like to hunt in a pack. Spidey and Aloysha fought off her spell, and shared a handshake. Aloysha said that he would hold Calypso at his mansion, so the villainess could tell him about his long-lost father. However, Aloysha slew Calypso instead.

Calypso is a recurring character and a one-time antagonist in Spider-Man: The Animated Series. She was voiced by Susan Beaubian.

This version of Calypso is renamed Dr. Mariah Crawford where she went to Africa to search for Dr. James Reeves and hired Sergei Kravinoff to help guide them. He protected her from animals and the two fell in love. After finding Dr. Reeves who found a cure to protect himself infection in the jungle with a side effect which caused him to turn into a feral creature. Before leaving, Dr. Reeves gave her the last of the serum and warns her to not under any circumstances use it on herself or anybody else. When Sergei became injured from a pack of hyenas while protecting Mariah, the latter used the serum on him which caused him to develop a feral side and turning him into Kraven the Hunter while he nicknamed her Calypso. After returning to America to work on a cure for Kraven until he tracked her down believing her to be seeing someone else, but Spider-Man managed to save her. After returning to the lab, Kraven kidnapped Joseph "Robbie" Robertson believing him to be the "other man" and convinced Spider-Man to bring Mariah to him in which he did. After defeating Kraven, Mariah cured him and they left for Africa.

Later, when Spider-Man developed a mutation disease and turned into Man-Spider, Mariah and Sergei returned to America and developed a cure and cured him of mutating again.

Mariah returned to Africa to help people from an unknown virus but she caught it which forced Sergei to give her the serum which turned him into Kraven. However, she turned into a feral creature who was more deadly than Kraven. As Calypso, she attacked people in the park at night which forced Sergei to become Kraven again and he fought with her until Spider-Man and Black Cat came to help subdue her and cure her with a serum developed by Debra Whitman. Mariah and Sergei then left and were never seen again for the rest of the series.

Calypso is a minor antagonist in The Spectacular Spider-Man. She was voiced by Angela Bryant.

This version is a voodoo priestess and Sergei Kravinoff's lover during his time as a game keeper and she along with Sergei's pet lion, Gulyadkin helped him with animals. After taking a rhino down to have it looked after, Calypso shows him pictures of Spider-Man and an offer by an American benefactor (Doctor Octopus as the Master Planner) to hunt Spider-Man in which Sergei accepts as a worthy challenge. In America, after his first defeat from Spider-Man, she offered to assist him but he kindly turned her offer down. He hired Miles Warren in turning him into a humanoid black-maned lion-like creature and renamed himself as Kraven the Hunter. However, after his second defeat from Spider-Man, Kraven is rescued by Calypso on behalf of the Master Planner who asks him if he would like to hunt in a pack. 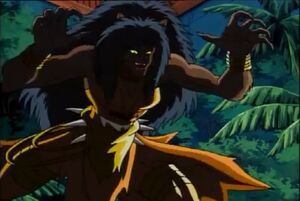 Calypso in Spider-Man: The Animated Series 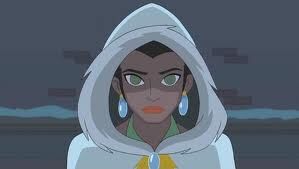 Retrieved from "https://villains.fandom.com/wiki/Calypso_(Marvel)?oldid=4100484"
Community content is available under CC-BY-SA unless otherwise noted.