Villains Wiki
Register
Don't have an account?
Sign In
Advertisement
in: Mature, Collector of Souls, Video Game Villains,
and 53 more

Billy Calypso
The Devil
The Beast

William Sparks, better known as Calypso, is the main antagonist of the Twisted Metal series.

The man who would be known as Calypso was born William Sparks in 1956-1957. He had a younger sister whom, when he was 12 years old after stealing his parent's car to run over a Copperhead (He had a fascination with roadkill at the time), accidentally ran over his sister's head. When his parents discovered this, they made him clean up the driveway of his sister's blood.

However, William stared at his Sister's doll, and after quite some time, he began to associate his sister with the doll. Two years after they buried her, they were still grieved and argued every time they went to put flowers on her grave. William, ridden with guilt, decided to try and join his sister, by blinding his father while he was driving, causing an accident killing his mother and father. William was disappointed that he was not among the body count, vowing to his sister that next time he would do it right.

He then decided to hitchhike until one truck stopped and offered Calypso a ride. The trucker named Al, gave William a job fixing cars in a demolition derby. One day, Al was drunk and shot William in the arm ranting about William listening to calypso music. The next day Al apologized and gave William his own car and gave him his old helmet, he was then christened Calypso.

For 20 years, Calypso participated in the Demolition Derby, hoping he would die. However, he kept killing both the drivers and the audience, but not himself. Eventually, Calypso went to Vegas and got married to a woman named Joanie. They had a daughter named Krista. Eventually, Calypso got tired of his wife and often cheated on his wife. One day, however, his wife was in the audience and a tire flew off and killed her. Calypso and Krista then lived their lives out of suitcases and motel rooms.

One night, Calypso went to a bar and left Krista in the back seat to sleep. When he left the bar, he saw his wife and she told him that she was in Hell and that he should be too. Calypso agreed, and she told him all he had to do was close his eyes and let go of the wheel. Just before they crashed, Krista woke up as Calypso had forgotten all about her.

Calypso went to Hell and was chased by a demon named Minion. Eventually, Calypso lost him. Satan, who saw the whole thing and was impressed. He gave Calypso a drink. It turned Calypso into the man we know him as today. He told Calypso to be the host of a demolition derby that would have more souls to come to hell. The winner however, would get one wish. No matter the price, size or even reality.

Calypso ran the tournament for 10 years, during which much suspicion was raised about Calypso and his tournament, mainly because the wishes always seemed to backfire at the winners, usually killing them. Because of this, many agencies such as Interpol and the CIA started to investigate the tournament and attempting to arrest Calypso, but to no avail. The only way anyone could ever get near Calypso was by winning the Twisted Metal tournament.

Calypso would grant any wish the winner desired, no matter what it is, even distorting reality to grant it. However, he would usually make so that the wish would backfire at the winner, causing harm not only to him but as many people as possible, usually killing them. This was his method of gathering souls. However Calypso must grant the winner's request, even when he doesn't want to (a fact that has been used against him on a few occasions).

The 2012 reboot has Calypso being portrayed as a demon from Hell.

Calypso is very calm, sadistic and manipulative, having a big sense of humor which he express by laughing after granting a wish. However, he seems to keep some of his good side, such as when he invites the spirit of his daughter to compete, so that she can wish to be resurrected. Before his death, he was also a suicidal individual, as he had accidentally killed his sister. 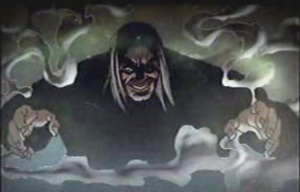 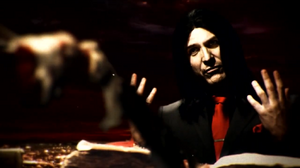 Calypso in the 2012 Twisted Metal reboot. 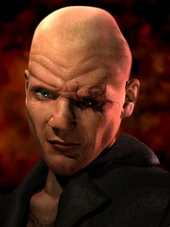 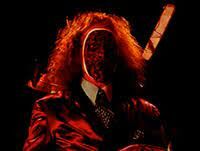