Camazotz, also known as Titanus Camazotz, is the main antagonist of the 2021 graphic novel Kingdom Kong. He is a hellish and destructive bat-like Titan who came from the Hollow Earth and was one of the many Titans Ghidorah had awakened to cause worldwide mass extinction.

After Ghidorah was slain by Godzilla, who became the new ruling alpha Titan, Camazotz returned to the Hollow Earth under Skull Island. Two years later in 2021, he reemerges to usurp dominion of the island for himself, only to be eventually stopped by Kong.

In 2019, Camazotz was one of the many Titans awakened by the call of King Ghidorah during the events of Godzilla: King of the Monsters.

Under Ghidorah's orders, he and the Titans attacked humanity, with Camazotz and a swarm of bat monsters attacking San Diego and clashed with Monarch pilots. He and his minions destroyed many of the enemy planes, including that of Captain Tam Nassar, placing them into a coma and even scarring Captain Audrey Burns, another and close friend of Tam. When Madison Russell used the ORCA to call all the Titans to Boston, Camazotz, unfortunately, did not arrive in time for the battle and did not even witness Godzilla become the new alpha Titan. At some point, Camazotz disappeared into the Hollow Earth.

Two years later in 2021, Camazotz resurfaced - his emergence on Skull Island was preceded by seismic activity, and by a leftover perpetual storm that Ghidorah had created being drawn away from its original location towards Skull Island. During an expedition conducted by Monarch, Houston Brooks finds hieroglyphs near the cavern leading a vortex into the Hollow Earth which spoke of the "King of the Deep", who would rise to claim his kingdom once the world was swallowed by darkness. Upon destroying the blocked cavern entrance with dynamite, a high-frequent screech injures the ears of the explorers. With Ghidorah's storm merging with Skull Island's storm barrier to engulf the island in darkness, Camazotz and his minions emerge from the underground, making Brooks realize he was the King of the Deep, having come up to continue his rampage.

Camazotz attacks the humans before being confronted by Kong, and the two Titans clash. Kong throws a large canister at Camazotz, but the giant bat emits a supersonic shriek that causes Kong to hold his ears in pain. Camazotz gains the upper hand by grabbing Kong in his talons and dropping him from the sky, repeatedly continuing to slam him onto the ground. Before Camazotz could finish off Kong by sucking his blood, Monarch fighter pilots enter the battle and open fire at Camazotz. Camazotz summoned his swarm to deal with the pilots, but this allows Kong to grab him from behind. Camazotz broke free of Kong's grip and took flight to deal with the pilots himself.

Having overcome her fear of the Titans, Audrey flies her jet, breaking the sound barrier right in front of Camazotz's face, disorienting him and he crashes into the ground. Kong pummeled Camazotz with his fists before dragging him by the horns to the crater from which he emerged. With one last punch to the face, Kong breaks Camazotz's jaw and sends him plummeting back to the Hollow Earth. The swarm then retreated into the crater as well.

Although Camazotz failed in his effort to usurp Kong's territory for himself, the alteration to Skull Island's climate was permanent; spelling the destruction of the island's ecosystem over the following few years, and forcing Monarch to seek a new home for Kong in Godzilla vs. Kong.

Camazotz is classified by Monarch as a "destroyer," which is reflected by his aggressive and destructive nature. Camazotz is said to have menaced mankind for many millennia, and leads his swarm of hellish bat-like minions in a quest to extinguish the sun and take over the world, plunging it into eternal darkness. He also seeks out atomic-rich Titan blood on which to feed. Within the context of Kingdom Kong, Camazotz attempts to conquer Skull Island once the storm renders the island dark, intending on killing Kong and claiming his status as an alpha Titan.

Camazotz appears to resemble a massive gray demonic bat with huge devilish horns and facial features, as well as tattered, shredded wings adorned with sharp, bone-like protrusions. His entire body is covered in angular, plate-like armor while one of his horns appears to be broken, possibly from a previous battle. He also has what appears to be a lion-like mane of thick black-colored fur covering the entirety of his back and parts of his neck. His jaws are filled with dozens of jagged, dagger-like fangs and his tail is long and prehensile, coated with spikes. His eyes are white and faded due to a millennia of living in darkness and his blood is shown to be dark black and oil-like, similar to Ghidorah's. 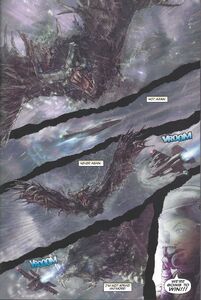 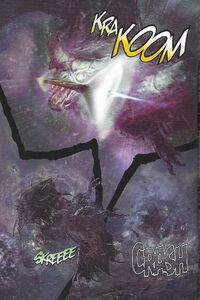 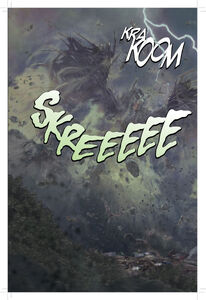 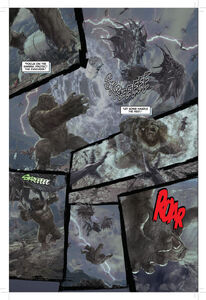 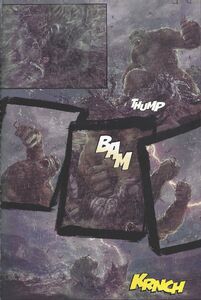 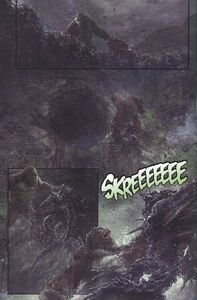 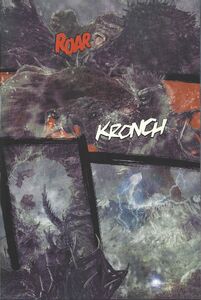