Cameo is a minor antagonist from the third arc of JoJo's Bizarre Adventure. Cameo is an assassin for Dio Brando, and wields the stand Judgement.

A mercenary hired by Dio Brando, Cameo is sent to kill Jotaro and his group. The group visits an island in the east coast of the Red Sea, when they notice someone sneaking on them, though it turns out to be Avdol's father. Distressed, Polnareff suddenly leaves and discovers a magic lamp washed up on shore. When he tries to clean the lamp, a smoke comes out of it, revealing a genie who identifies himself as cameo.

Cameo asks Polnareff for three wishes, and though Polnareff is initially suspicious of it he asks for lots of money, which Cameo grants by creating an ark full of golden coins. Cameo reappears and asks for the other two wishes, so Polnareff, after some goofing off asks him to resurrect his dead sister Sherry and Avdol.

Cameo grants the wish and brings Sherry back, but when Polnareff approaches her she attacks him. Polnareff, realizing the Sherry in front of him was not real asks for her to return to where she came from, but the genie refuses, revealing himself as the stand Judgement and reminding Polnareff that he had already made a final wish, so he creates a fake Avdol who also attacks Polnareff.

All seemed lost for Polnareff until the real Avdol came to save the poor Frenchman. Judgment was at a disadvantage and tried to use the fake Sherry to kill Avdol but it didn't work. Judgement then asks Avdol for three wishes, but Avdol messes with him by asking his three wishes to become four wishes.

Avdol then uses Magician's Red stand and easily overpowers Judgement, as he's been holding back before due to his wounds. When the stand was beaten, Polnareff and Avdol begin to search for Cameo and eventually find him underground, noticing a pipe that he was using to breathe. The two pee on the pipe, forcing Cameo to surface, then Avdol burns him alive.

Cameo's Stand, Judgement, is a robot-like genie which grants wished through the earth. He will unearth anything you wish for, but if you wish for someone to be resurrected, then he will create a clay doll similar to the person wished for resurrection. The dolls created by him are under his control. 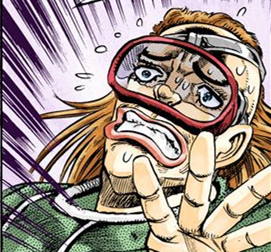