Avoid the authorities at all costs.

Get revenge on David. (both failed)

Campbell is the founder of Camp Campbell, as well as the employer of David, Gwen, and the Quartermaster. Most of Campbell's life is shrouded in mystery. For whatever reason, Cameron is wanted by the federal government for his crimes. In the episode "Camp Cool Kidz", Cameron has a safe that carries different objects such as gold bars with swastikas, a bag marked "1 kilo", and two books, one designated for the IRS, while the other one is not. Apparently, Cameron had committed horrific activities offscreen. For instance, Cameron has been stated to have arranged for several assassinations, one in particular being on the Prime Minister of Thailand. Upon the original prime minister's death, Cameron takes power.

Cameron had always been a xenophobic criminal since David first came to Camp Campbell. In the episode "Jasper Dies at the End", when it seemed as though the titular Jasper died when he fell off a cliff, Cameron silently reaches into his coat to produce a knife to dispose of David. If Jasper was not revealed to have survived the fall, Cameron surely would have killed David in order to get rid of any witnesses. Beyond that, Cameron had also been tried for drug trafficking and experimentation on animals. As a means of escaping from the authorities, Cameron created Camp Campbell as a front for his nefarious schemes. At the time the only people that seemed to be aware of Cameron's behavior was Gwen and the Quartermaster.

Eventually, Cameron's criminal career would come to an end when David decided to invite the campers' parents to the camp for "Parents Day". Though enraged by this, Cameron forces David into making the occasion as great as it possibly could when he realizes that Ered's fathers work for the FBI. What he did not count on was for Gwen to search for Max's files which reveal that his parents did not sign him up for any activity; they just did not want him around. Shocked by this, David goes against Cameron's wishes and takes Max out for pizza. Once he left, Cameron is exposed and is promptly arrested by the FBI. He is last seen threatening bloody vengeance on David.

Cameron was largely absent for most of the third season due to his sentence. In the third episode of the season Ered Gets Her Cool Back, he is heard through a prerecorded message regarding a dangerous ramp in the mountains. He makes his first physical appearance in "Dial M for Jasper" where it is revealed that Cameron had ordered David and Jasper to go to Spooky Island to locate his "idea file" after he informs the two that the camp was going to get closed down. As such, Cameron is indirectly responsible for Jasper's death: when Jasper was separated from David, Jasper tried to find damning evidence on Cameron's criminal behavior only to accidentally kill himself by lighting a stick of dynamite that subsequently ignites the rest of the explosives. David then gives Cameron the idea to make the camp into one where a camper could do anything, therefore, it becomes known as a "camp camp". Towards the end of the episode, Cameron was being interrogated by Ered's fathers, and he frames David for starting the camp, promising to give them incriminating evidence if it meant that David would be put in his place.

In "Cameron Campbell the Camp Campbell Camper", Cameron disguises himself as a camper as a means of getting David to falsely confess to crimes he did not actually commit. After failing a few times, Cameron tried to manipulate Max into helping him convict David. Unbeknownst to him, Max activates the microphone hidden behind Cameron's neck. David discovers the truth of Cameron's plan, and after Cameron angrily raves at him about "betraying him for the sake of the kids", David coldly tells him that he was disappointed in him. This causes Cameron to have a traumatic breakdown due to the type of punishment he received in Super Guantanamo, and he runs away with Ered's dads driving after him. 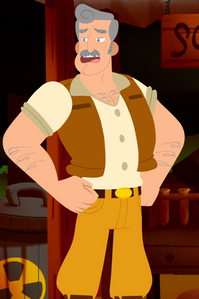 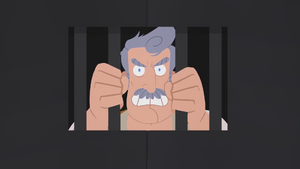 "This is your Fault Davey!, I Swear on my minor league baseball team, you haven't heard the last of me!” Cameron swearing revenge on David. 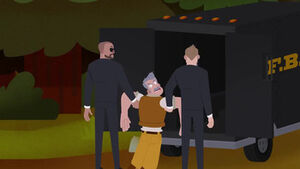 "Is this some sort of joke?" where he ask Gwen if this is a Joke after she admitted to the Fartz parents that they lost him to the Wood Scouts