Obtain the 0-8-4 from Coulson's Team so the Peruvian Government can rule the country (failed).

Camilla Reyes is the main antagonist of "0-8-4", the second episode of Marvel's Agents of S.H.I.E.L.D. She is an officer of a special unit of the Peruvian Armed Forces with the intention of using the 0-8-4 weapon to rule all of Peru.

She was portrayed by Leonor Varela.

Camilla Reyes is the commandant of an army in Peru, where the S.H.I.E.L.D. agents head to in order to retrieve a dangerous weapon simply known as "0-8-4." After an attack, Coulson and his agents take Camilla and her army to safety in their plane, but while there, Coulson discovers that he and his agents are being set up by Camilla and her army, leading to a confrontation. At that moment, the evil Camilla subdues Coulson, while her cohorts capture the rest of the agents. Camilla's plan: to take possession of 0-8-4 for herself and use it to rule over her entire army. Her plan is eventually thwarted, and while Coulson does save Camilla from being flown off the plane, he does subdue and hold her captive.

The episode suggests that Coulson and Camilla had a romantic fling together, but no details are revealed. He also claimed that he felt Camilla would eventually be released back to her government. It is unknown what happened to her afterwards. 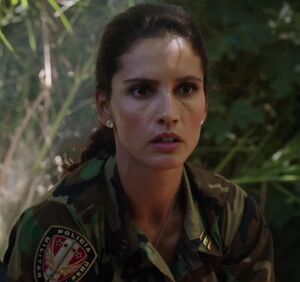