She was portrayed by Holly Shanahan.

She remained quietly inside a wall of his palace for 10,000 years until Dai Shi returned in Jarrod's body, resuming her role as his second in command. She serves Dai Shi out of devoted passion, proving herself by perfecting her abilities by withstanding the Claw Cannon and absorbing a bit of its energy before saving her master from Naja, slicing off his Life Talons for Dai Shi to use in his search for the Overlords. Her other various abilities include boosting the power of the Rinshi Beasts.

It is hinted that she may have feelings for Dai Shi/Jarrod as she commented that she found Dai Shi's new body to be attractive and she strives to gain his favor. She was also displeased at Dai Shi's change of personality after Carnisoar's training, deciding to resurrect Jellica to accomplish that. She also openly comments that she cares for him to Lily while she was in disguise. Despite his cold treatment of her, Jarrod may carry the same feelings for her as he saved her twice from Jellica's wrath, though the second time he said it was because she was still of use. She spares Lily's life when given the opportunity to destroy her, showing Camille has good inside of her that she is withholding.

Camille is followed, and annoyed by, the tiny fly, Flit. She once fought him as a human and cursed him by changing him into his current form and then swallowed him. As a part of the curse, Flit must stay in Camille's stomach or die. While she normally shows him aggression, she has shown a softer side to him meaning she may care about him. Camille had successfully stolen the Control Dagger from Dominic to give to Jarrod. When at the Rhino Nexus, she was attacked by Sand Snakes only to be saved by Dai Shi.

Camille later informed Jarrod/Dai Shi that Dr. Silvia Jennings has five of the Crystal Eyes when the time of the revival draws near. She infiltrated the Research Center and obtained the 5 Crystal Eyes only to fight Casey. The Rinshi that seized Dr. Jennings served as a diversion for Camille to get away with the Crystal Eyes and present them to Jarrod/Dai Shi. Following the destruction of Unidoom, Camille concludes that she needs Rinzin Power and tries to convince some of the Phantom Beast Warriors to give her some, but they act like she is joking and refuse.

Camille appeared as a hostess on the TV game show "Blow That Dough" in a plot to get the Rangers cancelled. This was thwarted when RJ sent Casey's morpher through the TV.

Once Dai Shi becomes the Phantom Beast King, he makes Camille into a Phantom Beast General and gives her Rinzin Power. With her suggestion, she receives the spirit of the Phoenix. She would later be referred to, in this new form, by Scorch and Snapper, as Camille Phoenix. She fought with a spiritless Casey and a Rinzin deprived Whiger when they arrived to free the other Rangers, bested by the combined efforts of the two Tiger Spirits.

She stole a cloning formula from a scientist named Maryl Snyder and used it on Grinder. Afterwards, Camille begins to become targeted by Scorch as she is unknowingly helping Jarrod regain control over himself due to the fact that it is really Jarrod that has feelings for her, rather than Dai Shi. When Jarrod was being attacked by Dai Shi after separating (because he makes the decision to refrain from destroying Casey), Camille ran in to protect Jarrod, losing her Rinzin powers and immortality in the process. Soon after, she helps the rangers in battling Scorch and destroying Snapper. Afterwards, she then joins Jarrod when he leaves the team in guilt for having unleashed Dai Shi but upon hearing that the Rangers were about to be destroyed left to help them, having truly decided to be good. She then managed to save the rangers' lives and was accepted by the rest of the team. After Dai Shi was destroyed, Camille is last seen being a new student alongside Jarrod in the Pai Zhuq Academy, with Casey as the main instructor.

Camille was not shown to have fought in the final battle between the Legendary Rangers and the Armada.

Camille is highly loyal to Dai Shi/Jarrod. She is much more dark and serious than ther original Sentai counterpart Mele. Camille is very brutal, warmongering and even sadistic in battle. She is possibly mentally unstable due to her cruel tendencies. She was shown to be taking pleasure from suffering of her enemies. However, she is also honorable and honest warrior and fights honestly in battle. Camille is not completely without mercy and compassion. Sometimes, she shows compassion to her opponents. She is also genuinely in love with Jarrod and wants to save him. She eventually redeemed herself and helped the rangers to defeat her former master Dai Shi. 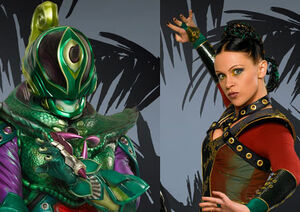 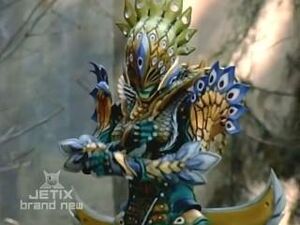 Retrieved from "https://villains.fandom.com/wiki/Camille?oldid=3963101"
Community content is available under CC-BY-SA unless otherwise noted.