Killing and devouring anyone she sees.

Kill and devour everyone (succeeded for three, but failed in killing the Janitor and Liv).

Cammy Chameleon is a supporting antagonist of the 2021 horror thriller film Willy's Wonderland.

She is an animatronic chameleon who was once a friendly children's entertainer and later gets possessed by a serial killer in devouring everyone along with Willy Weasel and the other animatronics.

She was portrayed by Taylor Towery and voiced by Madisun Leigh.

In 1996, Cammy Chameleon was once a friendly animatronic along with Willy Weasel and others. However, Jerry Willis, the original owner of Willy's Wonderland, and his team of serial killers put on some character costumes to kill some children in a party room, and everyone panicked. Later at night, Jerry and the killers killed themselves in a Satanic suicidal ritual before the authorities arrived, preventing from being captured. After that, their souls had been transferred into the animatronics, including Willy.

Ten years later, Willy's Wonderland was reopened by the new owner, Tex Macadoo, to keep the people unaware of this horrific past. Suddenly, Cammy (possessed by a serial killer) and the other animatronics have man-eating behaviors to attack and even devour children. After the children were seriously injured, Willy's had been permanently shutdown once again.

Later at midnight, Cammy finds Chris in the arcade room and pretends to convince Chris that she's not the same as the other animatronics and wants to be set free, and Chris seemingly believes her. When Liv arrives, Cammy spits her long tongue around Chris' neck to break him, killing Chris. The Janitor is about to fight Cammy, but he gets another break and lets Liv fight the robotic chameleon before he leaves. Liv tries to resist, but Cammy overpowers her due to her tongue. After a short break, the Janitor uses ropes to wrap around Cammy's neck and knocks Cammy over the arcade machines. Just as the Janitor is about to dump Cammy, he is stopped by Officer Lund and Deputy Evan who take Liv away.

When being tied on arms, the Janitor encounters Cammy and Siren Sara into a fight, badly injuring Sara and killing Cammy.

The Janitor pulling Cammy with ropes. 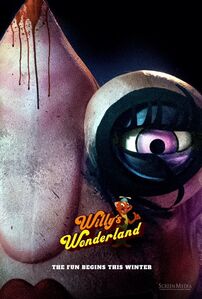 Retrieved from "https://villains.fandom.com/wiki/Cammy_Chameleon?oldid=4215121"
Community content is available under CC-BY-SA unless otherwise noted.