To kill as many Shadysider campers as he can.

He was a young and affable man working as a counselor in Camp Nightwing in the year 1978, until he became possessed by Satan and went on a killing spree across the camp, brutally axing any Shadysider he could find.

He was portrayed by McCabe Slye in Part 2, while Lloyd Pitts portrayed him in the other movies.

Shadyside and Sunnyvale are neighboring towns that had been going on a rivalry for centuries. Sunnyvale is often referred to as ''the town of prosperity'', a place where everyone wants to live. Shadyside, on the other hand, is known as a cursed place that works as a cradle for psycho killers.

However, there is a place where children and teens of both towns can coexist: Camp Nightwing. Thomas was a camp counselor working for his hometown Shadyside. He was known for being very average and boring, but overall a really affably and sweet guy to meet. Unfortunately, this wouldn't last for long.

The Goode Family is a really powerful lineage that has been keeping control of Sunnyvale for centuries. They achieved this by doing a Faustian bargain with the Devil, which involved giving him a single soul of a Shadysider so the demon could possess him and have fun, usually involving gruesome massacres.

On July 19th of 1978, Nick Goode sold Thomas' soul following his family legacy, in exchange to keep their wealth. Thomas would then grab an axe and kill as many Shadysider campers as he could by brutally chopping them to death. The Nightwing Massacre left 12 dead, the majority of them being children. The Camp would be later closed by the Goode family and a big mall was built onto it.

Despite his death, Thomas' soul would forever live as a slave for Satan, existing on his legacy as the Nightwing Killer

For more in-depth information about the plot in the Trilogy, see Satan.

Thomas was one of the three killers revived by Satan to hunt down Samantha Fraser, along with Skull Mask and Ruby lane. The Killers are revived after Sam comes in contact with the spirit of Sarah Fier, who wants the town to know the truth about the curse of Shadyside. Satan sent revived killers each time a person saw her spirit in order to protect his bargain with the Goodes. After being revived, the killers would then target that person, following their blood, and killing anyone who stands in their way.

The protagonists believed the curse to be the doing of Sarah Fier, ''The Witch of Shadyside'', so they attend to her burial site in order to appease her spirit. This only triggers the appearance of the Nightwing Killer, who runs at full speed in an attempt to kill Sam. The group manages to escape the killer and plan a scheme to get rid of the three Killers by using Sam's blood. They gather the killers in the bathroom of Shadyside's High School and set it on fire, causing them to explode into black goo. However, the remains reunite and the Killers come to life again. Nightwing is the first to gain physical form and attempts to kill Samantha again, but fails.

Finally, the protagonists realize that they could only get rid of them by ''killing'' Sam, following the story of C. Berman, the only survivor of the Camp Nightwing Massacre. They gather all of the killers in a grocery store and use themselves as bait by staining themselves with Sam's blood, while Deena tries to ''kill'' her using drugs and then tries to revive her by using epinephrine, also known as adrenaline. The plan proves to be a disaster and ends up with Kate being brutally murdered via bread slicer by Skull Mask and Simon being axed in the head by Nightwing. Deena improvises by drowning Sam in a lobster tank. Nightwing finds the pair and runs at them at full speed, but Sam dies before he has the chance to kill them. The killers then disappear and Sam is successfully revived by Deena.

This movie explores the origins of the Nightwing Killer and his possession. Nurse Mary Lane, mother of the long-deceased Ruby Lane and staff member of Camp Nightwing, has spent most of her life trying to find Sarah Fier's hand, which she believes is the only way to end the curse. The camp was built onto Union, the old Shadyside town, which means that Sarah Fier's house is found near it (later revealed to be Solomon's house). Next to her house there was an entrance that leads to the underground maze the Goodes used to curse people to be possessed by the devil. Mary had full access to these entrances and noticed that Thomas' name was already carved on the wall, which means he would soon be possessed. She tries to kill him in order to prevent a full massacre but fails, ending up in the hospital. Tommy spends all day hearing voices inside his head until he is finally possessed and sent into a killing spree in Camp Nightwing, killing twelve people, the majority of them being children. Thomas is finally put down by his girlfriend Cindy Berman but is later revived after Cindy's sister Ziggy Berman comes in contact with Sarah's spirit, along with other killers. Nightwing and the Milkman would brutally end the lives of the Berman sisters and disappear again. Ziggy is saved by Nick Goode, but her sister Cindy dies.

Nightwing is revived once again with the other killers, but this time to kill Deena. The main cast sets up a trap in which they would lock up all of the killers in the mall using the store's security fences and then stain Nick Goode with Deena's blood, releasing the killers so they would attack him. Nick manages to escape the trap and the cast sprays the killers with Deena's blood, causing them to attack each other. Nightwing attacks the Grifter with his axe but is later disarmed by him, allowing Skull Mask to attack him with his knife. Nightwing ''dies'' along with the other killers but as with the killers' deaths in Part 1, this wouldn't last for long. The killers arise again and attempt to kill Josh, Ziggy, and Martin, but are saved by Deena who kills Nick just in time, ending with Satan's bargain and making Nightwing vanish into a swarm of flies along with the others. It is unknown if Tommy's soul has a chance to finally rest in peace, or if it's still in the grasp of the demon.

List of known victims of the Camp Nightwing Killer. This list only applies to the on-screen deaths or victims whose body was discovered on-screen. Nightwing has approximately 13 confirmed victims. 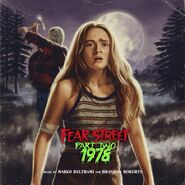 Ziggy struggles against Tommy by putting a burlap sack on his head.

Tommy is killed by Cindy.

Tommy is then revived by Satan, killing Alice.

Tommy now as the Nightwing Killer is sent to kill the Berman sisters.

Cindy loses the struggle against Nightwing.

Nightwing and the Milkman killing the Berman sisters.

Nightwing falling into the trap.

Nightwing being stained with Deena's blood.

Nightwing attacks the Grifter from behind.

Nightwing is attacked by Skull Mask.

Nightwing and the other killers destroyed after the frenzy.