Get away with kidnapping and murder of a wealthy man's daughter (succeeded).

Protect himself from possible assassinations (failed).

Campbell Sturrock, also known as The Meat King, is one of the targets of Agent 47 from 2004 stealth-action game Hitman: Contracts. He is the central antagonist of the mission "The Meat King's Party".

Campbell, being the Scottish crime boss, migrated to Romania with his brother, psychotic serial killer, Malcolm Sturrock. Some time after establishing his own slaughterhouse, largest in Romania, he ordered his henchmen to kidnap a daughter of a wealthy Romanian man. For an unknown reason, he then handed over the girl to his mentally ill brother, who tortured her for several months and ended her life, cutting off her arm, gouging out her eyes and and cutting a "smile" on her face afterwards. Of course, Campbell was charged for many crimes, including this one, but his corrupted lawyer Andrei Puscus managed to prove his "innocence" through illegal manipulations. Being pleased with this outcome, he throws a BDSM fetish party in a slaughterhouse building, making Andrei the VIP guest. However, grieved with his daughter's disappearance, an unnamed Romanian man contacts The International Contract Agency in order to find out about the fate of his daughter and eliminate Campbell and Andrei Puscus. Agent 47 managed to disguise himself as the slaughterhouse butcher, get into the building and kill Sturrock after hiding a sharp object in a roast chicken, bringing it to him and obtaining the weapon from inside the chicken while Campbell was engrossed into eating, murdering him.

Campbell is a bald, pale Scottish male in his 50s with blue eyes and the height of 181 cm. He is so morbidly obese that he spends most of his time lying on the bed in his private room with prostitutes. He cannot move on his own and has to be transported via the wheelchair.

Campbell Sturrock is a gluttonous and sexual deviant who leads a very hedonistic life. He is obsessed with meat and BDSM, ordering a roast chicken every few minutes and having perverted sex with several girls at the time, preferring kinky and sadomasochistic partners in leather suits and gas masks. He may also be masochistic himself, as well as having a choking fetish and be sexually sadistic. Campbell is quite wrathful and impatient, rudely shouting at his meat waiters and prostitutes. He likes to eat his dishes in privacy and is completely oblivious to anything that happens around him while he is busy eating. He loves to watch his guests partying from behind the glass panel of his room and, considering opium being involved in his party, he might be an opium addict as well. It should be noted that from his personal character sheet we can assume that Campbell Sturrock was suspected in practicing cannibalism and providing poor and cruel conditions for animals. Apart from being ruthless and deranged, Campbell is helpless and cowardly, not even arming himself with any kind of firearms and screaming for his guards while endangered. His morbid obesity may be the result of not being gluttonous by nature, since his cannibalistic tendencies imply that Campbell and Malcolm might have had a rough and hungry upbringing, which forced them to start practicing cannibalism, but this is only a theory. The People Eater from Mad Max might have been inspired by Sturrock. 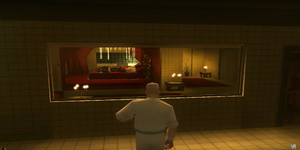