Camula is an antagonist from the first season of Yu-Gi-Oh! GX. She is the second of the Seven Stars Assassins and considered one of the most dangerous Shadow Riders ever encountered.

She was voiced by Kanako Irie in Japanese and Erica Schroeder in English.

Camula is a female vampire. She has green waist length hair, with a giant curl above her forehead. She wears a long red dress, with slits revealing her long legs. She also wears a lot of jewelry, including gold bracelets and a necklace.

Camula is a female vampire, and the only one that remains of her race. She survived the medieval times by locking herself up in a coffin, and hiding it. She remained hidden until Kagemaru revealed her coffin and released her. He gave her the Shadow Necklace, which is her Dark Item. She is the second Assassin to face the "keykeepers". She uses a vampire-oriented zombie deck, that revolves around summoning monster from the grave. She is a very serious duelists, and she hopes to revive her race by gathering souls. If she beats someone, she locks his or her soul up in a doll, or she sends the soul to the Three Phantasms by using her Spell Card "Phantom Demon's Gate". She manages to beat Vellian Crowler and Zane Truesdale, but she is beaten by Jaden Yuki. Her soul is then taken by the Phantom Demon's Gate, leaving her body to crumble. The souls that were locked up in dolls are then released. 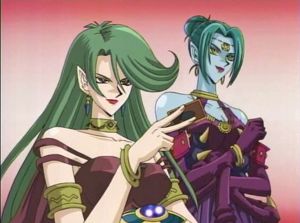