NOTE: For the sake of this wiki, this page is mainly about Camus as the leader of the Sable Order, when he reluctantly supported the evil Dolhr Empire.

Leader of the Sable Order of Knights

Skilled use of his lance
Expertise in horseback riding

Save Grust and Nyna (succeeded)

Aiding the tyrannical Medeus during the War of Shadows

Camus, is a major character in the Fire Emblem franchise. According to Prince Marth, Camus is reputed to be "the most able warrior alive" in Archanea. A general of Grust and leader of its Sable Order, Camus in a valiant knight, but unwillingly serves the warmongering Dolhr Empire when Grust allies with it because he believes loyalty to his country and liege are paramount. When the Archanean League storms the Grusthold, Camus falls defending it, but ultimately washes up on the shores of Valentia. Barely alive and amnesiac, he takes the name Zeke. Eventually his memories return, but now considering Valtenia his home, he only briefly returns to Archanea under the name Sirius to ensure the safety of his former companions

Camus is a blond-haired young man with a black coat, pants and cape. Over his arms and legs, Camus wears black plated armor.

Camus is a profoundly honorable man with a strong sense of justice and compassion for others. However, as a knight Camus considers himself honor bound to unquestioningly serve his liege regardless of his personal opinions on the orders. In spite of this, he will carry out minor acts of rebellion to assist those on the other side who he believes are in the right, such as smuggling a copy of Thoron to Marth. However, Camus has occassionally been pushed to openly defy his superiors, most notably protecting Nyna from harm despite Medeus' wishes.

At the dawn of the War of Shadows, King Ludwick of Grust quickly allied with the Dolhr Empire, ruled by the cruel Medeus. Though he personally objected to Medeus' actions, Camus believed that as a knight he had no right to question his king's decisions, and so led the Sable Knights against any kingdoms that opposed Dolhr. The Sable Knights played a significant role in the downfall of the Holy Kingdom of Archanea, while the Dohlr army besieged its Millennial Palace. Not wanting Archanea to suffer further, Camus arranged with Princess Nyna to take her and the capitol custody, in a bid to protect them from crueler occupying governors.

For two years, Camus successfully protected Archanea and Nyna from further decline; in the interim Nyna and he slowly developed a mutual affection. However, Medeus grew tired of Camus' relative generosity towards Archanea and sent an army to apprehend Nyna. In response, Camus decided to send Nyna to Prince Hardin of Aurelis. Because escorting her in an official capacity as a Grust knight would threaten the life of one of Medeus' hostages, Grust's Prince Jubello, he and subordinates Belf, Roberto and Raiden deserted the Grust army. In a battle with General Brzak's Dolhr army, Camus fends them off long enough for Nyna to reach Aurelis, but is ultimately captured and imprisoned.

Near the end of the War of Shadows, Camus was released and reinstated as leader of the Sable Knights, where he continued to fight in Medeus' service at the behest of a gravely ill King Ludwick. When the Archanean League marched on Grust, Camus defended its Grusthold with fellow general Lorenz. Despite Marth and Nyna's pleas to join their side, Camus refused to betray King Ludwick despite their conflicting principles, and was defeated in battle. His body not found later, Camus was believed to have been killed in action.

An Einherjar of Camus is available as a bonus ally to the Shepherds through SpotPass. Another Camus Einherjar opposes the Shepherds first and third Rogues & Redeemers DLC xenologues. In the first chapter he is the boss of a group of villainous Einharjar battling a group of heroic Einherjar the Shepherds allied with, while in the third chapter the Shepherds decided to seal both groups back into their cards.

Camus was first made available to Fire Emblem Heroes summoners on June 2, 2017 as the ninth Grand Hero Battle. His outfit is based on his design from Shadow Dragon.

Camus appears in Super Smash Bros. Ultimate as an Ace-level Shield-type spirit using his official artwork from Shadow Dragon. When equipped to a fighter, Camus grants three support spirit slots. To obtain Camus, he must be defeated in a spirit battle, where he is represented by a Marth on Arena Ferox. This enemy Marth has stronger melee-weapon based attacks, can deliver powerful "critical hits" without warning, and has the ability to automatically heal one time when he takes enough damage. When leveled to 99, the Camus spirit evolves into a Sirius spirit.

Camus' portrait in Fire Emblem: Shadow Dragon and the Blade of Light

Camus' portrait in Fire Emblem: Mystery of the Emblem 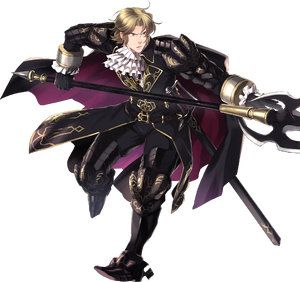 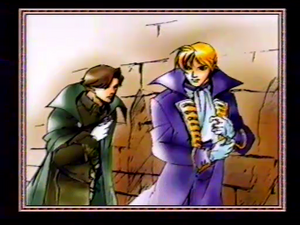 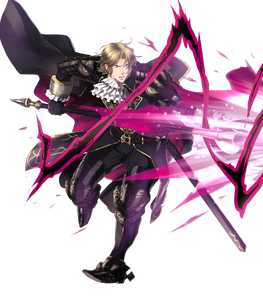 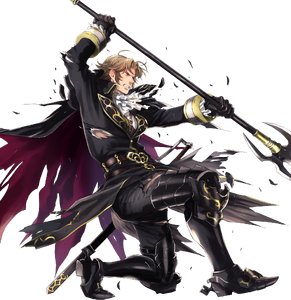 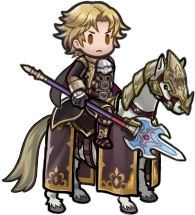 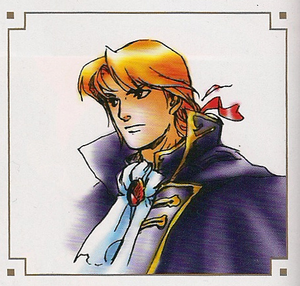 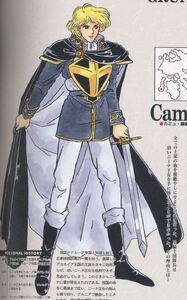 Concept art of Camus from Fire Emblem The Complete 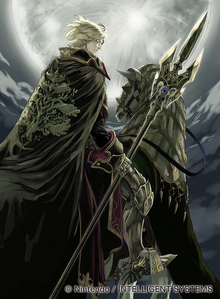 Retrieved from "https://villains.fandom.com/wiki/Camus?oldid=4245800"
Community content is available under CC-BY-SA unless otherwise noted.