Control over Canada and its people

Dancing to "The Safety Dance".

Telling everyone to suck his balls.

Keep Canada ruined for his own satisfaction.
Kill Mr. Garrison (both failed).

The Canadian President is the President of Canada and the main antagonist in South Park Season 19's "Where My Country Gone?". He was a "brash a**hole who just spoke his mind", which the Canadians found funny at first. However, they let the joke go on for too long and he got elected President, demoting Canada's once glorious state into a Chernobyl-like wasteland which made the Canadians evacuate to the United States for asylum.

He was voiced by series co-creator Trey Parker, who also provides a number of other voices for the cartoon.

After succeeding in his election as president, he made Canada a horrible place to live that the Canadians fled to the United States. He later built the Canadian Wall in order to keep the Americans out. Mr. Garrison, who is also a discriminatory racist himself, disliked having to live with Canadians because he found them annoying. To smuggle himself into Canada, Garrison hid in a barrel which his supporters tossed into the Niagara Falls so that he arrived in Canada. 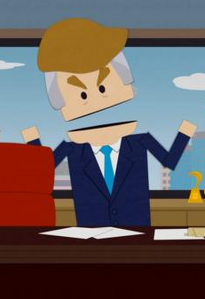 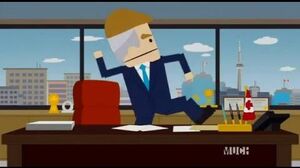