Kill the organs.
Kill the man.

Cancer Cells, or simply Cancer, is a disease from the animation respectfully known as "Organ Story", created by the legendary animator and video game developer known as "Splapp-me-do". The cancer appears to be a black-purple mass, with red evil eyes, and mouth which have sharp teeth.

The animation starts with the man sleeping, while inside of him, his organs are being presented in the animation. The man ends up waking up at 8 am for his work and eats breakfast. Later on, the man is seen smoking cigarettes and eating unhealthy, in one scene the man is featured with his mouth full of cigarettes, while his lungs were chocking from the cigarettes.

Eventually, the man appears to be obese, sitting and eating, while his heart ended up dying from the unhealthy life. The other organs screamed extremely ear-shatteringly in a banshee-like tone, as a hospital vehicle took the man, and gave him shock therapy, which succeeded with his heart backing up to work again. The man is seen sitting in this hospital, as he sees cigarettes, smoking them again. In the end, a cancer call appears, causing other cells to transform into cancer, while the organs screamed, as the cancer spread all over the man's organs.

The animation ends with the man dying from cancer killing the man's brain. 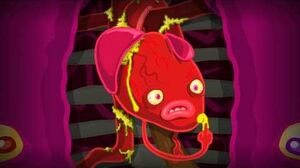