Stormtrooper Candace is the tertiary antagonist turned anti-heroine of the Phineas and Ferb special Phineas and Ferb: Star Wars, where she chases the main heroes trying to return the Death Star's plans on the disc which R2-D2 dropped.

Sometime after Phineas was born, Candace decided to join the Galactic Empire forces, as she hated the Rebels who mess the law and order. As such, she becomes a Stormtrooper. However, the most of time she was asked to do tedious tasks such as to buy socks for Darth Vader, though it obvioulsy that she has a big potential as a soldier.

Candace and her henchmen, Buford and Baljeet saw the escaping C-3PO and R2-D2 and then decided to follow them on the another escape pod, to land in Tatooine. Eventually, they found their commander, who then ordered Candace to buy socks for Darth Vader in Mos Eisley. She bought it with Buford buying a hogy, however, she spotted Phineas and Ferb with Death Star's plans, and with her helpers started to chase them. As they escaped with Isabella, Candace tried to blast them from a huge cannon, but missed. She then gave her commander the ordered bag with socks. However, instead of going to Death Star on a shuttle (with was fulled), she was ordered to go on a bus pod.

On the way to Death Star, it was revealed, that Buford and Candace messed up with the bags, and the one given to commander contained Buford's hoagie. Vader dropped it and choked the commander to death. The hoagie would be thrown away and picked up by Darthenshmirtz, who is planning to use his Sith-inator to become Force-sensitive. After arriving to the Death Star and got alarmed about Han Solo's actions, she tries to do her best, but instead was stayed to protect the post of prison block.

In return, Candace saved Phineas's life while he was battling against Darth Ferb, leading to Darth Ferb's defeat, as well as Darthenshmirtz's defeat. As Perry the Rebelpus attempts to get the carbonite-trapped Darthenshmirtz into custody (though this failed when Darthenshmirtz manages to escape and evade in an escape pod), the kids tried to escape on the bus pod, but is flew off without them. Then, Candace recognized Phineas as her brother and meet Ferb as her step-brother, gladly accepting them. Luckily, they were saved by the arriving Isabella before the Death Star explodes. At the end, Candace, Buford, and Baljeet attended the Rebel celebration of the Death Star's destruction. 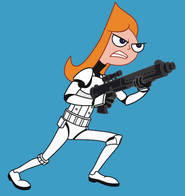 Retrieved from "https://villains.fandom.com/wiki/Candace_Flynn_(Star_Wars)?oldid=1787758"
Community content is available under CC-BY-SA unless otherwise noted.