Redeemed Dark Knight
Joyful Knight Candelilla was a general in the Deboth Army and a major antagonist of Zyuden Sentai Kyoryuger. She later reformed and became an ally to the Kyoryugers, eventually replacing Torin as the team's mentor.

She is portrayed by Haruka Tomatsu, who also voiced Megumi Shimizu in Shiki and Nashiro Yasuhisa in Tokyo Ghoul √A.

Candelilla is an odd knight. She is an airheaded happy-go-lucky knight, who encourages others like Sorrowful Knight Aigaron to "Keep smiling!". She was the second Knight to be thawed out after the Deboth Army's big freeze.

She seems to abhor senseless violence, such as when her fellow Knight forcing her lieutenant to grow his fallen Debo Monster and when her Debo Monster became berserk again. This causing her to unleash a high-pitch scream of terror.

During the Debo Honenukky incident, she met Nobuharu Udo, KyoryuBlue, and found a kindred spirit in the pun-spouting Kyoryuger. She said then that she could even come to love him, if they weren't enemies.

In the time following Endolf's "disappearance", she and Aigaron began growing closer, as Aigaron began harboring an affection for her. The Knight of Joy's kindness began rubbing off on Aigaron, and he soon began to regret his old tendencies of killing humans for fun, and the tin man's heart softened. Luckyuro aided Aigaron in numerous attempts to impress Candelilla, but the Sorrowful Knight's affections still went unnoticed, though the effort did not.

Candellila met the blue Kyoryuger once again when she used Debo Kantokku to steal people's hearts. Posing as a potential wife for Nobuharu (in a meeting unknowingly set up by his sister), with Luckyuro posing as her mother, Candelilla realized that, whether or not she was Deboth, Nobuharu was willing to protect her and stand up for her due to her caring nature, and during this Nobuharu reminded her that she and Luckyuro were created to make people happy so could easily learn to live with humans. She aided Nobuharu in defeating her Debo Monster by returning his Gaburevolver to him, though she acted as if it was an accident. After this incident, she was asked by Nobuharu to leave the Deboth Legion. Though she refused, she began to question her standing within the organization.

Once Luckyuro became relieved of his duties within the Deboth Legion, he ran away, prompting Candelilla to go out searching for him. Since Killbolero had effectively replaced her within the organization, and fearing that she would defect like Torin had done before (while considering how Endolf mentioned that she could be one of the strongest knights yet), Chaos ordered her to be executed. Overhearing this, Aigaron rushed to warn Candelilla and Luckyuro, having already received a tremendous beating from the forces within the Frozen Palace. Icerondo rushed to confront them, and revealed that Aigaron had been an undead from the moment Chaos revived him, and as the dead cannot fully know love, Aigaron's plight was hopeless. Realizing Aigaron's feelings at last, Candellila was caught off guard, and was attacked by Icerondo. However, Aigaron took the hit, and was mortally wounded. Ian approached, however, and used Deinosgrander to free the Sorrowful Knight's soul from its metal prison. Aigaron's final act was presenting a severely distraught Candelilla with a pink flower. After the Kyoryugers defeated Icerondo, Ian gave Candelilla the flower that Aigaron had dropped in his final moments, and Nobuharu comforted her. Both asked her and Luckyuro to leave the Deboth Legion and live a new life. This time, she agreed, promising to find her place in the world, as Torin had.

When Torin, Ramirez, and Tessai's raid in Deboth Hell was stopped by Chaos (who had purposefully allowed the new Kyoryu Silver to defeat him to that end), Candelilla and Luckyuro (in possession of a lantern that allowed him to enter Deboth Hell without being dead) come in to assist the Kyoryuger allies, much to Chaos' shock. Candelilla, Torin, Ramirez and Tessai perform their special attacks along side each other and defeat Chaos, sending him hurtling against the pillar that held Deboth Hell together, destroying both him and the pillar in a single strike. The three former rangers express their gratitude to both Candelilla and Luckyuro. Torin then tells them to live a life filled with Bravery before they pass on.

After the final battle, she cheers up a saddened Nobuharu from the shadows. As both reformed villains try to figure out what should they do now, they notice a lost girl trying to find her mother. Remembering Nobuharu's words, Candelilla's decides to use her powers of joy to bring smiles to all humans on Earth. Luckyuro follows suit and both help the lost girl find her mother.

100 years after defeating Transcendenterfly God Deboth, Candelilla has become the mentor to the new team of Kyoryugers.

She is armed with a large battle axe with the shape of a open heart, called the "Kyahahalberd"

Candelilla doesn't seem to battle much, but she is good enough to make a Kyoryuger wary. However, she's easily distracted. 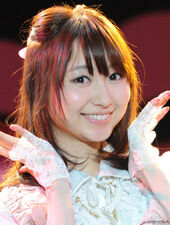