Kill everyone who invokes their names five times in a mirror.

Haunting and killing all those who commit racial injustice.
Recruit the spirits of black people killed by racism.
Continue to perpetuate the legend.

The Candyman Hive is the main antagonistic faction of the 2021 supernatural horror slasher film Candyman, a sequel to the 1992 horror film of the same name and are the overarching antagonists of said movie.

It all started back when Daniel Robitaille, the son of an escaped slave, fell in love with a white woman. When she was pregnant with his child, her father led a lynch mob to torture Daniel. They cut his right hand off, smeared his body with honey, and a legion of bees stung him to death. Daniel, from that point on, was reborn as the vengeful spirit Candyman who wrought fear throughout Cabrini Green.

Following his death, several other African-American men found themselves becoming part of the Hive such as James Byrd Jr. and George Stinney if the shadow puppets are understood to be a reference to them. In the 1970s, a young Burke unwittingly caused the police to beat the one-handed Sherman Fields to death due to the assumption that he was the culprit behind razor-laced candy that a white girl acquired on Halloween. However, it then became apparent that Sherman was innocent when more razor blades were found in candy. After Sherman killed his older sister in the form of the latest iteration of the Candyman, William became obsessed with resurrecting the urban legend so he could use the wrathful spirit as a beacon of justice for the black community.

After sacrificing her life for Anthony McCoy, Helen Lyle became part of the Hive after her death and murdered her cheating husband and presumably set up his young lover as the culprit. However, from there, she was not known to have killed anyone else, though her story had become demonized over the years.

When a now grown-up Anthony arrived to Cabrini Green to conduct research into the urban legend, William tells him about the story of Sherman Fields to further groom Anthony into becoming the next Candyman. After he gets stung by a bee that causes his hand to rot, Burke kidnaps him and severs his right hand and replaces it with a hook. He then calls the police to claim that he spotted the "Say My Name" killer so that Anthony would be killed by the cops, completing his transformation.

Despite Brianna killing Burke, the mad man succeeds posthumously when the racist cops shoot and kill a defenseless Anthony and try to have her memorize a version of events where the officers were forced to shoot Anthony in a provoked attack. Instead, she summons Candyman who slaughters all of the police officers. The original Candyman's face materializes over Anthony's and tells Brianna to tell everyone of his return. 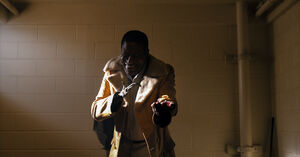 Sherman Fields, a member of the Hive.