Kill everyone in Cody's life.

The Canker Man is the main antagonist of the 2018 supernatural fantasy horror film Before I Wake. It is a homicidal monster that is created by and plagues young Cody Morgan's nightmares.

It was voiced by Topher Bousquet.

When Cody Morgan was a baby, his birth mother Andrea noticed that he had an extraordinary gift: when he dreamed, his dreams manifested in the real world as physical objects and creatures. However, when Cody was still a toddler, she was diagnosed with pancreatic cancer. Cody could not understand cancer, and even misinterpreted the word "cancer" as "canker". One day, he was about to be taken into foster care. He was allowed to see his mother one last time, but was traumatized by her pale, gnarled, and skeletal appearance. Though these traumatic memories eventually were suppressed, Cody still kept the imagery and the term "canker" in the back of his mind, eventually creating a personal bogeyman that he believed killed his mother: the Canker Man.

When Cody was adopted by a pair of foster parents, they too noticed his unbelievable gift to create things through his dreams. However, he would often have nightmares involving the Canker Man, causing the Canker Man to became real and would terrorize and attack the parents, eventually killing them and absorbing them into its body.

Cody moved on to another pair of foster parents, but the process repeated itself. The mother was viciously murdered by the Canker Man, and the father was left alone and depressed. In an attempt to get revenge on Cody for killing his wife and to put a stop to the Canker Man threat once and for all, he planned to shoot Cody in his sleep. However, he could not bring himself to do it. He was later arrested and admitted to a mental hospital, and Cody was put back into foster care.

In the film, Cody is then adopted by spouses Jessie and Mark Hobson, who lost their son Sean in an accident where he drowned in a bathtub. They take in Cody, who eats sugar and drinks soda and coffee before bed, afraid of what he will do. However, when he falls asleep, he dreams about Sean (based on photos of him he sees around the house), and Sean appears before Jessie and Mark. Seeing this as a way to see Sean again, Jessie exposes Cody to pictures, stories, and home videos of Sean to make him appear more in Cody's dreams, even though Mark is against it. As the nights go on, the dreams become more and more disturbed, and eventually the Canker Man begins manifesting as well.

However, Cody only sleeps for a few hours a night, and as such, is extremely tired at school. His teacher offers to let him sleep in the classroom during recess, and he happily agrees. However, as he sleeps, the school bully comes over to him looking to cause trouble. The Canker Man manifests, then attacks, kills, and eats the child. Cody wakes up realizing what he has done, and is eager to get home when school ends.

That night, however, Cody and his parents is terrorized by both the Canker Man and a twisted, undead version of the bully in his dreams.

In an attempt to make Cody sleep better and get more dreams about Sean, Jessie goes to the doctor and tells him Cody has not been sleeping well, to which the doctor prescribes a sleeping pill. She mixes it with Cody's drink, and he remains in a deep sleep all night. However, when his dreams once again turn dark and the Canker Man arrives, Mark cannot wake him up. The Canker Man attacks and devours Mark and knocks out Jessie. Cody wakes up hours later and calls the police. Cody's caseworker, Natalie Friedman, suspects domestic violence, compounded by Jessie drugging Cody to sleep, and takes Cody away.

Jessie pleads with Natalie to help her, but she refuses and thinks she is insane. Jessie then steals Natalie's case files and discovers Cody's past, and goes to see his former foster father in the mental hospital. He urges her to kill Cody, but she refuses.

At the orphanage, Cody is given a tranquilizer to help him sleep after avoiding it for two days. Jessie arrives to see that the Canker Man, as well as the twisted, undead forms of all the people it killed, are roaming the orphanage and attacking staff, trapping some in moth chrysalises. Jessie, having discovered Cody's suppressed past, confronts the Canker Man, who attacks her and prevents her from getting to Cody. However, she shows it one of Cody's toys given to him by his late mother, which confuses and stops it. She then hugs the Canker Man, who vanishes back into Cody's mind. The captured staff are released, and Natalie allows Jessie to take Cody home.

One at home, Jessie explains to Cody what cancer is and why the Canker Man was his recurring nightmare. Cody accepts this, and the Canker Man will not return. It is also believed Cody might have been able to return the people killed by the Canker Man, but this is unknown.

The Canker Man is the embodiment of all of Cody Morgan's fears, insecurities, and trauma. It stalks and kills relentlessly, as Cody imagines it to be a remorseless and evil entity that kills mothers and children and warps their bodies into nightmarish monsters. However, it is a part of Cody's subconscious, so it does react and perceive the world as he does, even remembering Cody's old toys and memories. 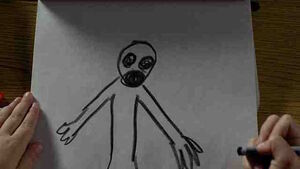 Cody's drawing of the Canker Man. 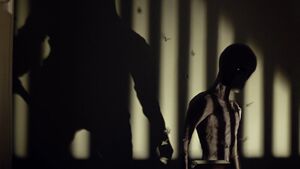 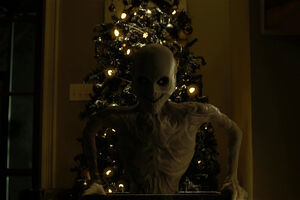 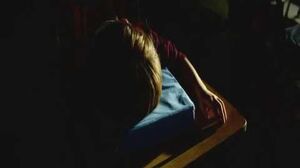 Before I Wake Classroom Scene 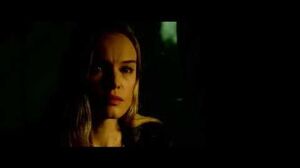 Before I Wake - Scary Scene 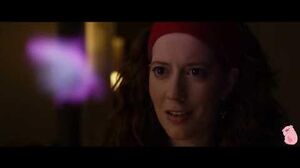 Before I Wake The truth about Canker Man 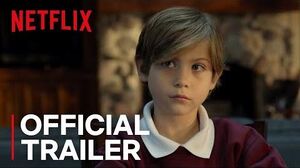 Before I Wake Official Trailer Netflix