Servants of the Mother

The Handler
The Keeper
The Pilgrim's Rest inhabitants

Release and serve the Mother.

Cannibals are grotesque creatures fond of human flesh in the video game Jade Empire. They are creations and servants of a demon known as the Mother. They appear in the second chapter as crucial characters of the subquest in the Great Southern Forest.

All cannibals were once mortal men before they were corrupted by the Mother. Through her teachings, they have embraced the way of drawing strength by eating human flesh. They have a high sense of self-esteem of their hideous essence and are utterly dedicated to the Mother, working tirelessly to carry out her will. They also hate and fear the Forest Shadow, the archenemy and light counterpart of their mistress. They have a condescending view of mortal humans, viewing them basically as food, though they are capable of respecting strong, potential allies. They have their own cookbook, though only one of the recipes it contains — "Leg of Ham" — is known.

Though cannibals are short, they are strong and fast as well as capable of stealth. They aren't very intelligent or exceptionally skilled individually, but they pose a threat when attacking in large groups. They're immune to magic styles and the Spirit Thief style. They are also capable tunnelers, having created mazes of caverns as their base of operations.

Some of the more intelligent cannibals have been taught to use magic by the Mother. They can use magic styles to fight as well as disguise themselves and other cannibals as humans. Some of them know how to command Rat Demons to do their bidding. These more intelligent cannibals are higher in the command chain and are easily distinguishable from the other cannibals: they are neither bald and as short and hunched as the run-of-the-mill cannibals, and they wear robes instead of rags.

Centuries before the Jade Empire was formed, the Mother and her light counterpart, the Forest Shadow, were both anchored to the Great Southern Forest. Aspiring to assume the forest all for herself, the Mother whispered dark promises of power to impressionable men who eventually became her first cannibal underlings. As the cannibals' numbers and the Mother's power grew, the forest twisted and blackened as the trees grew sick.

The Forest Shadow attempted to fight back by destroying cannibals and blocking the paths into the forest to prevent their numbers from growing further. However, the fox spirit was on the losing side and had to trick the neighboring kingdoms to burn the entire forest. The Mother, who had invested a large portion of her power in the trees, was weakened to the point that she fell into a torpor. The Forest Shadow kept her sealed inside a hill while she helped the forest to regrow stronger than before. The Mother's cannibals fell along with their mistress, and it wouldn't be until millennia later that they would resurface.

After the Water Dragon was killed thanks to Emperor Sun Hai and Sun Li the Glorious Strategist, more and more restless ghosts of the dead were trapped in the mortal world. The Mother was awakened by their feelings of anger and hunger for release. Drawing strength from these dark emotions, she reached out into the minds of men once again and recreated her cannibal underlings. She first corrupted the innkeeper of the Pilgrim's Rest, the inn that was built on the hill she was trapped in.

The new cannibals started working to set their mistress free, digging tunnels in her prison hill. The Pilgrim's Rest was maintained by the innkeeper who disguised himself and a group of other cannibals as humans. They'd lure in travelers and drag them underground either to eat them or convert them into cannibals. At some point, the bun master Henpecked Hou traveled by the inn and was caught by the cannibals. Considering him too skinny to eat, they kept him around as a cook in order to make the inn look more normal to the victims.

When the last Spirit Monk enters the Great Southern Forest, they're asked by Lord Yun, the owner and guardian of the land, to seek a solution to the sickness plaguing the trees in exchange for a wind map to the Imperial City. They are directed to the temple dedicated to the Forest Shadow where Lord Yun's lead hunter, Spear Catches Leaf, has gone to in order to contact the Forest Shadow through a ritual passed by Lord Yun's family. While traveling through the forest, they have to save from ghosts a cannibal disguised as a man. Having been trying to reach Tien's Landing in order to lure people to the Pilgrim's Rest, the disguised cannibal invites the Spirit Monk to the inn, telling them not to go to the Forest Shadow's temple. He's then attacked and killed by the Forest Shadow who then tries unsuccessfully to turn the Spirit Monk to stone and flees.

If the Spirit Monk decides to side with the Forest Shadow, she releases the Mother, allowing the Spirit Monk to enter the hill she's trapped in through the back of the Pilgrim's Rest. Fighting through hordes of cannibals, they find the Mother and collapse the cavern on her with the help of Henpecked Hou and the Black Whirlwind. As the trio escape from the collapsing tunnels, the cannibals share the fate of their mistress, and even if some manage to survive the cave-in, they likely aren't able to survive in the forest for long without the Mother. If the Spirit Monk sides with the Mother, they kill the Forest Shadow, releasing the Mother. The Keeper offers the silver he promised and Henpecked Hou whom he considers to have become redundant. The Mother and her cannibals can be left to plan for the spreading of their corruption and Lord Yun can be convinced to visit the Pilgrim's Rest where he'll likely be killed. Alternatively, the Forest Shadow can be killed, and after her, the Mother and her cannibals as well.

Even if the cannibals of the Great Southern Forest are destroyed, the entire race isn't gone yet. The Imperial Arena of the Imperial City has captured a group of cannibals from the forest to be used against the arena fighters. The first match of the Bronze Division is fought against a group of cannibals consisting of four regular ones and one intelligent one. The cannibals make one last appearance following Lucky Cho's death in the arena's creature pens. Deciding it to be too much trouble to remove Cho's corpse in the middle of a match, Kai Lan the Serpent releases the captured cannibals to feast on Cho's flesh.

One of the more intelligent cannibals in the company of regular cannibals. 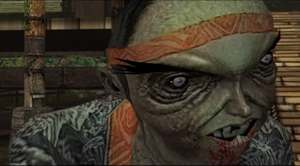 A close-up of the Keeper. 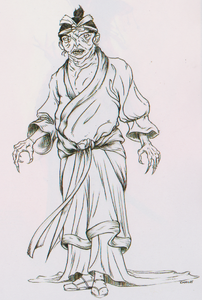 Concept art of the more intelligent cannibal variant.
Add a photo to this gallery
Retrieved from "https://villains.fandom.com/wiki/Cannibals_(Jade_Empire)?oldid=3977014"
Community content is available under CC-BY-SA unless otherwise noted.