Leader of the Hero Faction of the Khaos Brigade

Destroy Devils, Fallen Angels, and Dragons which he believes are threats to humans.

Cao Cao was the leader of the Hero Faction of the Khaos Brigade. He is the wielder of the Ultimate Longinus, the True Longinus. He is also the descendant of Cao Cao from the Chinese novel Romance of the Three Kingdoms. In Volume 17, Cao Cao becomes Indra's vanguard after Sun Wukong gives up his position.

He is voiced by Kōsuke Toriumi in the Japanese version, and by Clifford Chapin in the English version.

Cao Cao first appears in the end of Volume 6.

Cao Cao made his official appearance during their class trip in Kyoto. He and the rest of the Hero Facton summon the Great Red however, was stopped by Issei and his friends along with the last minute intervention of Sun Wukong. In the process, Cao Cao lost one of his eyes to a final blow from Issei.

Cao Cao reappears in the Underworld after Issei and the Gremory Team defeats the Hero Faction, challenging Issei to a fight, which Cao Cao was able to dominate, but eventually lost after Issei used a bullet with Samael's blood on his Medusa's eye weakening him. In his last attempt to defeat Issei, Cao Cao attempted to use the Truth Idea but did not happen due to the will of the God in the True Longinus choosing Issei's dream instead of Cao Cao's ambition. He was then rescued by Georg who carried Cao Cao and Leonardo until they meet Indra who proceeded to take their Longinus and sent Cao Cao and the other two to the Realm of the Dead.

Although Cao Cao did not appear in person in Volume 17, he used his True Longinus to break through the barrier created by Ladon surrounding Auros, thus helping D×D.

Cao Cao helped defend Heaven from the attack of Qlippoth in Volume 18. He fought against Ladon and was able to trap him inside a crevice for Rias to use her Extinguish Star to destroy Ladon's body and for Koneko to seal his soul inside a jewel that came from Issei's armor. When asked why he returned, Cao Cao replied that he wants to know why the True Longinus was given to him. 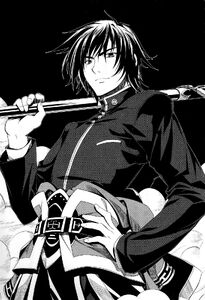 Cao Cao in the manga
Add a photo to this gallery

Retrieved from "https://villains.fandom.com/wiki/Cao_Cao_(High_School_DxD)?oldid=4292649"
Community content is available under CC-BY-SA unless otherwise noted.