to kill Hou Jie by taking power (succeed) and take over China (failed).

Cao Man is the main villain in the 2011 Hong Kong film Shaolin. He is Hou Jie's second-in-command who later became his foe when Cao took his power as Warlord in a coup, sending assassins to kill Hou and his family becoming main antagonist of the movie.

He was portrayed by Nicolas Tse.

Cao become sworn brother to Cao Man and Song Hu at young age and during the war, Hou Jie became powerful warlord who killed his enemies in cold-blood and Cao was his deputy who witnessed his boss's killings including a man who seeked shelter in Shaolin Temple. Feeling that he was used as his pawn and treated very badly, Cao decided to seek power against Hou with the help of foreign leaders.

After Song was informed by Cao's letter about Hou's plans, Cao sent his assassins to kill Song's family and Hou Jie and his family managed to escape.

However Hou's daughter was injured by assassin's horse carriage and later died of her injures which left Hou Jie in grief for his beloved daughter's death and in remorse he became a monk at Shaolin Temple to atone for his past misdeeds while Cao Man took power by killing Hou's allies and bodyguards and forcefully recruited male refugees to build railway by unearthing Chinese relics and massacring people to silence them.

While dealing with Russian army,Hou and other monks rescued the refuges. Later he informed that Hou was still alive living at Shaolin Temple, Cao sent his troops to bring him Hou volunteers to go with Cao to stop evil plans and avoid destruction on entire country.

Cao taunted Hou's decision to enter monastery to repair his sins as he ordered his solders to drown Yan Xi at the pot before Hou rescued her and defeated soldiers and Cao stabbed Hou's senior Jingneng to death while covering his juniors to escape. Meanwhile other Shaolin monks and refugees decided that they need to evacuate while Hou and other monks remained behind to defend the temple. 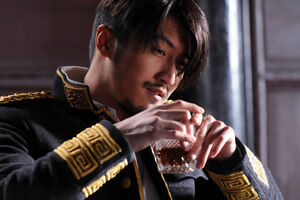 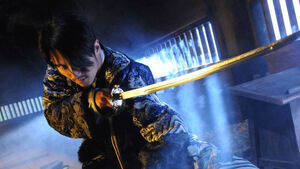 Add a photo to this gallery
Retrieved from "https://villains.fandom.com/wiki/Cao_Man?oldid=3534396"
Community content is available under CC-BY-SA unless otherwise noted.