Leader of the Gusteko Assassin Organisation.

Changing the physical forms of people to her liking.

Make everyone in the world love her (ongoing).

Sadistic Shape-Shifter
Capella Emerada Lugunica, also known as the Sin Archbishop of Lust and Mother, is a major antagonist in the 2014 Japanese dark fantasy light novel series Re:Zero − Starting Life in Another World and the unseen overarching antagonist of the non-canon 2021 spin-off video game Re:Zero − Starting Life in Another World: The Prophecy of the Throne.

Capella Emerada Lugunica was a member of the Witch Cult, an organization dedicated to the reverence of the Witch of Envy. The Cult was led by the Sin Archbishops, a group of individuals who each represented one of the seven deadly sins. Capella was counted amongst the ranks of the Sin Archbishops, personally representing the sin of lust. Capella was said to have the worst personality of the Sin Archbishops, believing that everything in the world existed to love her. Her power, the Authority of Lust, allowed her to manipulate the physical form of herself and other organics, befitting for a woman who wanted everyone in the world to love her. She was also the ruthless leader of the Gusteko Assassin Organisation referred to as "Mother" or "Mama" by her subordinates.

Under the direction of the gospel (the religious text that gave orders to Witch Cultists), Capella led an assault on the water gate city Pristela alongside the Archbishop of Wrath Sirius, the Archbishop of Greed Regulus Corneas, and the dual Archbishops of Gluttony Lye Batenkaitos and Roy Alphard. Capella was tasked with retrieving the remains of the Witch of Pride, which had been stored in the city since the Witch's death four centuries prior. Unfortunately for her, a young man named Subaru Natsuki led a resistance against the Witch Cult, driving them out of the city. Of the Sin Archbishops, only Capella and the Gluttony brothers made it out, as Greed was killed and Wrath was captured.

Even among the Sin Archbishops famed for their vulgar personalities and irredeemable actions, Capella was considered a special brand of evil. Lust viewed people other than herself as mere bags of meat meant to operate as she deemed fit. As she saw those around her as little more than animals, Capella cared not for the opinions and feelings of others nor whether or not her actions caused pain and suffering. Actually, the Sin Archbishop seemed to revel in the pain of others, often cackling as she brought torment upon them.

Befitting her title as the bearer of the Lust Witch Factor, Lugunica was obsessed with the concept of love. She felt a great urge for every single person in the world to love her, although like everything about the Archbishop, Capella's idea of love was severely warped. She presented excessive pride in regards to herself, often citing herself as a kind woman whose beauty compared to none.

Nine years before Subaru Natsuki's summoning, Capella, as the leader of the Gusteko Assassin Organization, tasked a former slave named Reisel with retrieving an object relating to the legacy of the Witch of Envy. The object in question was quite possibly a fox-like artificial spirit created by the Witch of Greed roughly four centuries prior. In order to help him complete his mission, Lust loaned him a magical artefact that would allow him to manipulate shadows in certain ways. However, Reisel's mission was ultimately thwarted and he was forced to destroy the artefact that Capella had given to him. The Mother of the Gusteko Assassin Organization, in her usual ruthless fashion, decided to punish her failure of a subordinate.

Reisel, who had only just made it out alive, was crawling across the ground while muttering about how he would enact vengeance upon his opponents the next time they crossed paths. It was then that Capella arrived, standing over the defeated form of the failure. With her usual sadistic tone, Lugunica rhetorically asked the demi-human man if he thought scum like him would receive a second chance. Reisel, gazing into Lust's evil red eyes, began trying to beg for forgiveness with no small amount of terror in his voice. The Sin Archbishop interrupted her minion, revealing that she had in fact been observing his mission in its entirety from a far.

With no small amount of glee, Capella said her words of farewell before proceeding to reach down and touch Reisel's forehead. The Sin Archbishop of Lust channelled the power of her Authority into the man before her, swiftly transmuting his physical form into a disgusting amorphous blob incapable of proper sentient thought. With the loss of her magical artefact and subordinate, Capella couldn't help but feel bereft. To nobody in particular, Lust affirmed that she would one day get her vile hands on the remnant of the Witch of Envy that Reisel had failed to obtain. 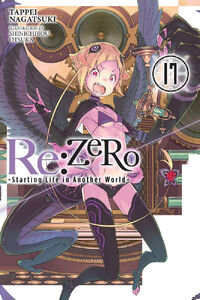 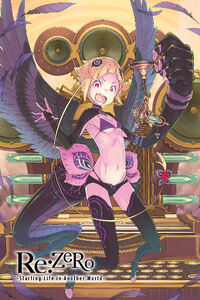 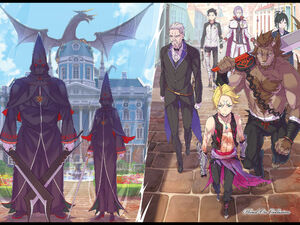 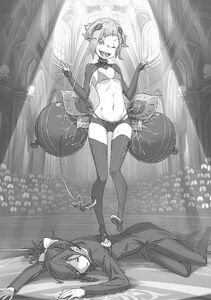 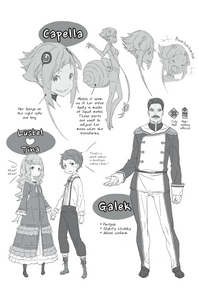 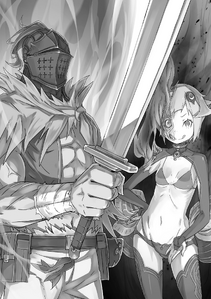 Note: Although not directly stated, it is incredibly likely that Princess Emerada Lugunica and the Sin Archbishop of Lust were the same person. As such, information pertaining to the princess will be included in this section of the article.

Emerada Lugunica was a princess of the Kingdom of Lugunica who purportedly died of an illness sometime before the Demi-Human War. Described as beautiful, Emerada had the red eyes and golden hair shared by all members of the royal family. She had a nonconformist viewpoint and was known for her cruelty and general distaste towards others.

Despite her cruelty, Emerada was very intelligent and had excellent intuition. As such, she was considered to have the qualities necessary to become a Lion King. A Lion King was the title of a ruler who had ruled over the Kingdom of Lugunica before the pact was made with the holy dragon Volcanica, meaning they had ruled through sheer competency as opposed to the modern rulers who were maintained due to their bloodline. Emerada was acquainted in some regard with Miklotov McMahon, a governmental official.

Decades after Emerada's apparent death, a new individual was born into the royal line who had the qualities of a Lion King. The boy, Fourier Lugunica, displayed the same intuition his relative Emerada had. One day, Miklotov McMahon, now an old man, talked with the young prince about the Lion Kings of old. When Fourier expressed disbelief that an individual capable of being a Lion King could be born, Miklotov began to reminisce about Emerada before silencing himself.