Steal all the world's books.

Obtain the lost Pagies of the One Book to make himself the ruler of the universe.
Destroy Yooka and Laylee.
Conquer the Royal Stingdom (all failed).

Capital B is the main antagonist of the Yooka-Laylee franchise. He is an antropomorphic corporate bee who aims to obtain The One Book and rewrite it to set himself as the ruler of the world. Later is revealed that Captial B is merely a subordinate working under the V.I.L.E. organization. After his initial defeat he was left trapped in the Royal Stingdom which he then attempted to conquer, but he was defeated a second time when his sister Queen Phoebee recruited Yooka and Laylee to take him down.

Capital B is an evil and wealthy humanoid bee who runs Hivory Towers; his place of business and corporate lair. Aided by his associate Dr. Quack, Capital B used a machine called the Noveliser 64 to steal all the world's books and create a monopoly over the entire book industry.

The real goal of the device however was to obtain omnipotent One Book, which has the power to rewrite the universe. However, the One Book's pages, which are actually sentient "Pagies" fled and hid themselves through Hivory Towers and five different Grand Tomes, magical books that act as gateways to other kingdoms. Without the Pagies the One Book is useless, so Capital B ordered his minions to retrieve them. Not long after, a chameleon named Yooka and a bat named Laylee walked into Hivory Towers looking for the One Book, which they had found earlier before it was stolen by Capital B. Throughout the game, Capital continuously taunted the duo as they went deeper into Hivory Towers finding Pagies.

When Yooka and Laylee visited Capital B's Capital Cashino he (badly) disguised himself as the Banker and attempted to trick the duo into gambling away all their Pagies in rigged casino games, however the plan backfired when they obtained all the Cashino Tokens, forcing Capital B to give them more Pagies as earnings much to his anger. Yooka and Laylee did not see through Capital B's terrible disguise during their visit to the casino.

Once Yooka and Laylee obtained all the Pagies Capital B boasted that he planned to let the duo gather the Pagies so that he could then steal them for himself. After a lengthy battle Capital B was defeated, after which Dr. Quack revealed himself to be a supervisor sent by the V.I.L.E. organization who also serve as Hivory Towers' board of directors and was posing as Capital B's assistant the whole time. But before the heroes could find out more, a sentinel cannon named Blasto shot a cannon ball at Capital B and Dr. Quack, launching the pair into an Grand Tome that was then closed and scattered into a pile of other Grand Tomes, leaving the two trapped inside.

Yooka-Laylee and The Impossible Lair

In the sequel Yooka-Laylee and The Impossible Lair, it is revealed that the Grand Tome that Capital B was trapped in after his initial defeat sent him to the Royal Stingdom which now he's aiming to conquer. Capital B also setup a new secret based dubbed "The Impossible Lair" which, as the name suggest is allegedly impossible to conquer. He used a device called the Hive Mind (Likely once again built by Dr. Quack) to take over the Royal Stingdom. Queen Phoebee requested Yooka and Laylee to takedown Capital B since they defeated him before and offered her Royal Beetalion, an army of bee soldiers that form a powerful shield that guards the duo, however Captial B used the Hive Mind to take control of the Beetalion. Yooka and Laylee attempted to cross the Impossible Lair but quickly failed.

Queen Phoebee managed to separate sections of the Royal Stingdom into multiple, smaller Grand Tomes and scattered them across the outskirts of Hivory Towers, with the Beetalion bees being found in each of the Grand Tomes. Yooka and Laylee have option to tackle the Lair just about whenever they want regardless if they have found all the Beetalions or not, whenever they fail Capital B mocks them and keeps track of how many times they have tried (and failed) the gauntlet.

As Yooka and Laylee venture through the Impossible Lair, they occasionally fight Capital B who attempted to eliminate them while protected by the Royal Beettalion, who were under control of the Hive Mind. For every Beetalion member that Yooka and Laylee have rescued they also get an additional point of protection for themselves, evening out the odds. During the fourth battle against Capital B he dropped the Hive Mind which Yooka used to control Capital B and force him to fly into a buzzsaw which took down the rest of his Beetalion and drained his final hit points, defeating Capital B once again.

In a last ditch attempt to take down the duo, Capital B triggered the lair's self destruction sequence, giving them two minutes to escape the lair. However, Queen Phoebee rescued Yooka and Laylee at the last moment. It is implied that Capital B survived the explosion and that his failure once again enraged V.I.L.E., Queen Phoebee also revealed that she is actually Capital B's sister and also a member of V.I.L.E., much to Yooka and Laylee's great surprise. 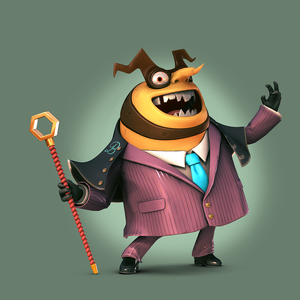 Retrieved from "https://villains.fandom.com/wiki/Capital_B?oldid=3534402"
Community content is available under CC-BY-SA unless otherwise noted.