Villains Wiki
Register
Don't have an account?
Sign In
Advertisement
in: One Piece Villains, Anime Villains, Manga Villains,
and 38 more

Bege
Father (by his subordinates)

Captain of the Fire Tank Pirates

Capone Bege (in Japanese: カポネ・ベッジ, Kapone Bejji) is a pirate in One Piece. He is one of the 12 notorious pirates called the Worst Generation (who are Monkey D. Luffy's rivals) and the leader of his own pirate group the Fire Tank Pirates. Capone Bege has a modus operandi of infiltrating groups and organizations so that he can murder the leaders of these groups for his own pleasure. He is the husband of Charlotte Chiffon and father of his son, Capone Pez. He is a supporting character in Sabaody Archipelago Arc, the secondary antagonist in Zou Arc and a supporting character in Whole Cake Island Arc.

Bege is willing to negotiate with his enemies like Luffy and become allies with him to accomplish his goal of killing Big Mom. Despite his cruelty, he was shown to uphold his allegiance with Luffy and Jinbe and tried to help them. Outside of his sadism, he is willing to protect his crew and is protective of his son, Capone Pez, and wife, Charlotte Chiffon. He is also gives funny faces for his son, Pez and hoped Pez of becoming a great leader like him for the future.

In the past, Bege gained a reputation for infiltrating many groups and assassinating their leaders for his own pleasure. He then became a pirate and formed his group the Fire Tank Pirates and earned his bounty for pirating.

He appears in Sabaody Archipelago where he meets with the other members of the Worst Generation like Monkey D. Luffy, Jewelry Bonney, Eustass Kid, and many others. When Luffy punches a Celestial Dragon, Saint Charloss, Bege and the other pirates have to leave Sabaody Archipelago when an admiral, Kizaru, a warlord, Bartholomew Kuma, and multiple Pacifista units appears. Bege escapes and makes it to Marineford where he witnesses the last moments of the war between the Whitebeard Pirates and the Marines. He also makes it to the New World but is caught by an unidentified object that is levitating the sky. Capone Bege later infiltrates Big Mom Pirates, but unlike the other pirates who infiltrate her territory he decides to become an ally to her. While becoming a member of the Big Mom Pirates, he marries Charlotte Chiffon to complete the alliance with them. He also have a son with Chiffon called Capone Pez.

Bege was sends by Big Mom to go after and retrieve Caesar Clown and Sanji. With the Straw Hats at Dressrosa, he follows their ship on Big Mom's ship to Zou. While on Zou, he and Pekoms find the Straw Hats. Bege met with the Straw Hats and wants Caesar and Sanji. When the Straw Hats saves Pekoms family from Jack's attack, Pekom only wants Caesar but Bege is outraged from his idea and defiance to Big Mom's order and shot Pekoms. Bege then arranges for a meeting with Sanji by taking Chopper, Nami, Brook, and Caesar hostage. Bege reminds Sanji of his past as a royal and says that Big Mom and his father, Vinsmoke Judge, wants to arrange for a political marriage with him and Charlotte Pudding. Sanji is at first against the idea but is forced to do it because he did not want to his endanger his crew with the Big Mom Pirates. Sanji manages to save Nami, Brook, and Chopper, and holds Caesar as a hostage to prevent Bege from capturing them. Bege left Zou with Sanji, Caesar and his crew when Nekomamushi asks him what he did to Pekoms.

Bege appears on Whole Cake Island after bringing in Caesar and Sanji. He abducts Pekoms and taunts him before shooting him off a cliff into shark-infested water. He finds Caesar and make him an ally in exchange for the latter getting his heart back. One day later, Bege organizes a meeting with the Straw Hats to go over the assassination plan against Big Mom. Both the Straw Hats, Caesar, and the Fire Tank Pirates are able to put aside their issues to work towards the assassination plan.

Bege is the guard for the wedding in the morning. When the plan starts with Luffy acting as a decoy, Katakuri orders Bege to kill Luffy but he refuses. After Brook destroys the Mother Carmel photo that Big Mom liked, she screams. Bege and his crew mates attempt to assassinate Big Mom with a rocket launcher but the plan fails when her powerful scream destroys the rockets before they reached her. When the plan fails he retreats with the Straw Hat Crew and the Vinsmoke Family. Big Mom attacks him in his Big Father form when she find out he is a traitor. With the protection of the Vinsmoke Family, Bege and his allies are protected by the Big Mom Pirates. When the castle falls over, the group escapes from the Big Mom Pirates.

After their escape, Bege parts ways with the Straw Hats. When Chiffon, Pudding, and Sanji are needed to make a cake to stop Big Mom's rampage, Bege helps them leave Cacao Island and go against Charlotte Oven. Bege agrees to leave the cake with him as the Straw Hats try to escape from Big Mom. As they are trying to escape from her, his ship gets destroyed. He leaves the cake on an island far from the Straw Hats. When Big Mom begins to eat the cake, he along with his family and crew left.

Bege and his family and crew makes it out of Totto Land to read the newspaper of what happened. They ended up venturing to Dressrosa and encountered marines while there. He saw his wife, Chiffon, reunite with her sister, Lola. 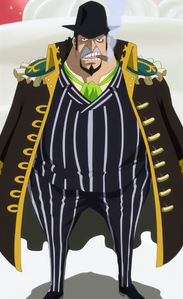 Capone Bege after the timeskip. 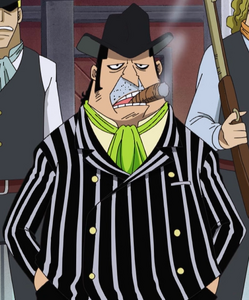 Capone Bege before the timeskip. 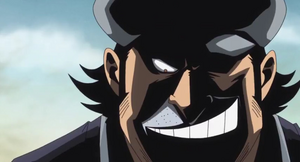 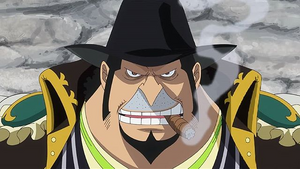 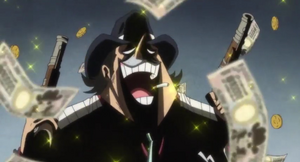 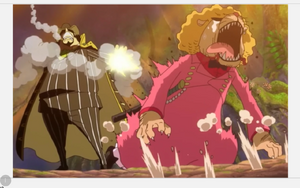 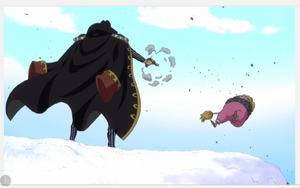 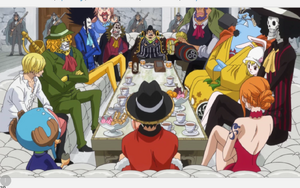 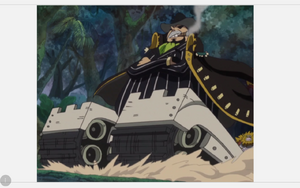 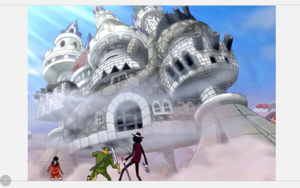