Captain of the Pequod

Captain Ahab is the main antagonist of the 1996 animated film The Adventures of Moby Dick. He is a ruthless captain who wants to kill the white whale named Moby Dick, whom he thinks he bit off his leg.

He was voiced by James Woods, who also played Hades in Hercules, Falcon in Stuart Little 2 by, Gloomius Maximus in Rolie Polie Olie: The Great Defender of Fun, Dr. Phillium Benedict in Recess: School's Out!, Martin Walker in White House Down, Ned Trent in The Specialist, Byron De La Beckwith in Ghosts of Mississippi, Maximilian "Max" Bercovicz in Once Upon a Time in America, and Lester Diamond in Casino.

Ahab was a dreaded whale hunter at the coasts of Massachusetts. His ship was called the Pequod.

Once in 1841, he encountered a rare white whale named Moby Dick. He almost got him, but he killed whale's mother instead due to her sacrifice to save his son. By this accident he lost one of his legs. He remembered that it was bitten off by Moby Dick.

He then started a hunt just for the white whale to complete his revenge. In this journey, he had two more members of his crew, a young boy named Ishmael, and an experienced warrior named Queequeg. Once he smelled a whale, and he was sure that Moby Dick was somewhere near. He ordered his crew to get ready, he promised a gold coin to the one who sees the whale first. Then he orders Ishmael to clime up to the mast and tell him if he notices the whale. Ishmael refuses this at first, but Queequeg climes up instead of him. Queequeg reports that he saw a whale but not sure wether it is the white whale or not. Then Ahab goes out on boats with his harpooners to get the whale. But it wasn't Moby Dick.

Some days later, Queequeg said that he had enough and he doesn't like that Ahab only hunts for Moby Dick. Then he smelled Moby Dick again, and ordered Ismael to clime up on the mast. He climes up, but falls into the sea. Ahab doesn't care.

A few days later suddenly Ishmael shows up in the sea. The crew saves him. Ishmael tells him that Moby Dick is not a monster and the whale didn't bit his leg off. He also tells that he found some treasure wich can make all of them rich and then they could stop whale hunting. However, Ahab doesn't listen at all and captures Ishmael and Queequeg for oppose him.

At night, Moby Dick shows up and goes after him even tough a storm broke out. Suddenly then Moby Dick jumped on his boat wich made him fall off to the sea. His destiny is unclear. 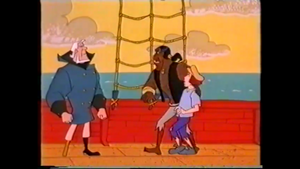 Ahab with Queequeg and Ishmael 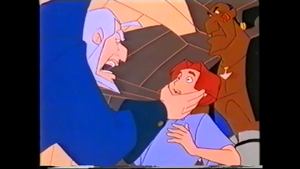 Ahab with Ishmael and Queequeg 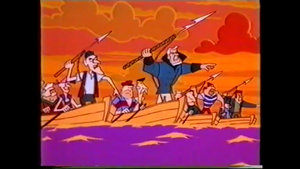 Ahab on a whalehunt with his harpooners 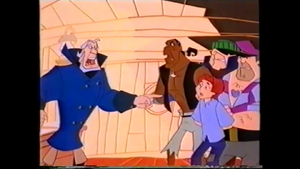 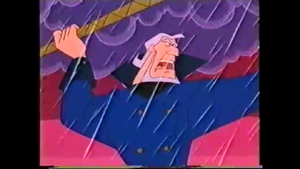 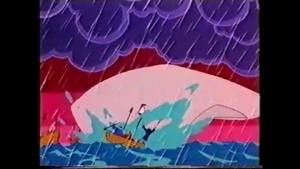 Moby Dick gets on Ahabs boat 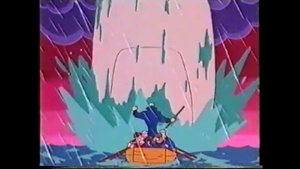 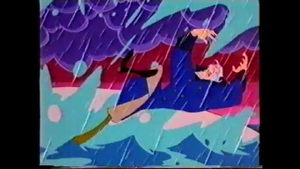 Ahabs fate
Add a photo to this gallery
Retrieved from "https://villains.fandom.com/wiki/Captain_Ahab_(The_Adventures_of_Moby_Dick)?oldid=3619811"
Community content is available under CC-BY-SA unless otherwise noted.