Steal the G.H.O.S.T. security system and sell it for profit.

Captain William "Bill" Fawcett is the main antagonist of Disney's 2005 live action film The Pacifier. He is the corrupt commanding officer of the film's protagonist, Lieutenant Shane Wolfe, until he reveals his plan to sell the Ghost Program to Korea once it is found.

He was portrayed by Chris Potter.

After Howard Plummer was killed by enemy fire and Shane spending two months in the hospital, Captain Bill Fawcett is assigned to escort Plummer's widow, Julie, to Zurich, where Plummer's safety deposit box has been discovered. He sent Shane to the Plummer residence in Bethesda, Maryland, to search for the secret project called GHOST and look after the family's children.

Unfortunately, Julie cannot retrieve the box unless she figures out the password her husband used and she and Fawcett end up staying longer than expected. After several weeks, Julie finally figured out the password (my angel), retrieved a key from a box, and is on her way home. Meanwhile, Shane calls Bill and says that he found the GHOST in a secret vault underneath the garage.

When Bill and Julie arrive home, Bill and Shane go to the garage, where Wolfe says he is rethinking his career. Two ninjas arrive armed and pulled off their masks, revealing themselves as the Plummers' North Korean neighbors, the Chuns. Bill suddenly knocks out Shane, revealing himself to be a double agent. Mr. Chun restrains and guard the children while Bill and Mrs. Chun take Julie down to the vault. They open the door but a dangerous security system prevents them from going further. Shane was awaken by the children who escaped and heads down to the vault.

Inside the vault, Fawcett threatens Julie that if she does not open the vault, he will shoot her. Shane interrupts saying that she doesn't know it. Fawcett then forces Shane to open the vault. Shane gets past the security system using a dance Howard had used to make his son Peter go to sleep each night. Bill, Julie and Mrs. Chun walked to the vault slowly. He then points his gun at Shane telling him to open the vault. But Bill changes his mind, points his gun at Mrs. Chun and tells her to open it instead since he walked the floor first. Shane quickly grabs Julie back and fights Bill and Mrs. Chun. Julie knocks out Mrs. Chun and Bill asks Shane if he has any last words before he shoots him. Shane says "Say goodnight, Peter Panda" which activates the vault, knocking out Bill with the door. Fawcett and the Chuns are then arrested for their crimes. It is implied that Fawcett was also court martialed for his actions. 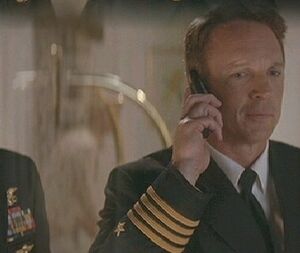 Bill Fawcett being told that Shane found the vault. 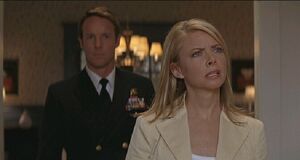 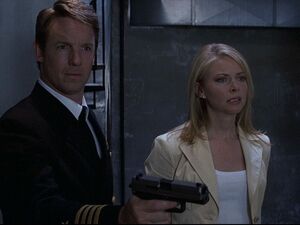 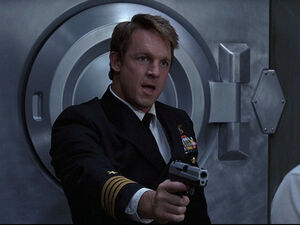 Retrieved from "https://villains.fandom.com/wiki/Captain_Bill_Fawcett?oldid=3995623"
Community content is available under CC-BY-SA unless otherwise noted.