Being evil and mean

After giving the evil twins the punishment they deserve and George and Harold's grandparents fly off for a romantic dinner, the duo dehypnotize and shrink Sulu to normal. They then take Evil George, Evil Harold, and Captain Blunderpants back into the Purple Potty and then they kick them back to their universe.

Captain Blunderpants is evil and very mean. But when he is in Mr. Krupp form he is the best principal you would know. He does things opposite to Captain Underpants and Mr. Krupp such as when he is a supervillain, he behaves like Mr. Krupp, says his triumphant "La La Traaaa" instead of "Tra La Laaaaa" and appears at the dark side but when he is Mr. Krupp, he behaves like Captain Underpants, friendly to George and Harold and thinks that doing funny things is cool.

Captain Blunderpants is opposite to Captain Underpants. As he is a supervillain, he wears a toupee, and a sinister face. When he is Mr. Krupp, he is seen with no hair and looks harmless. 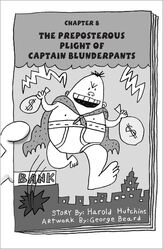 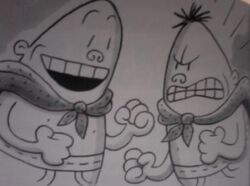 The Captain Underpants - Underpants vs Blunderpants
Add a photo to this gallery
Retrieved from "https://villains.fandom.com/wiki/Captain_Blunderpants?oldid=3887409"
Community content is available under CC-BY-SA unless otherwise noted.