Member of the Suicide Squad (formerly)

Kill Lyla Michaels for forcing him to join the Suicide Squad

Digger Harkness, known as Captain Boomerang, is a minor antagonist in the third and fifth season of the TV show Arrow. He was formerly a ASIS agent and is a mercenary known for his use of boomerangs.

He is portrayed by Nick E. Tarabay, who also portrayed Ashur in the Spartacus films and The Butcher in Call of Duty: Modern Warfare.

Digger was a ASIS agent who specialized in technology and weaponry. However, he later betrayed ASIS and started selling his services to the highest bidders. He was eventually captured by A.R.G.U.S. and they recruited him in the Suicide Squad.

During a mission in Tanzania, the Suicide Squad was outgunned while fighting a warlord. Since the team was expendable, Agent Lyla Michaels has them killed by setting off the explosives implanted in their necks. However, Digger survived as his explosive malfunctioned.

Harkness eventually returns to Starling City, intending to kill Lyla for attempting to murder him in Tanzania. In order to get revenge on Lyla, Harkness hunts down an A.R.G.U.S. agent whom he ambushes in an alley. He hurls a projectile at the agent but the man is able to dodge it. However, unbeknownst to the A.R.G.U.S. agent, the projectile was a boomerang which flies back and impales the agent through the back, killing him.

When investigating the murder, Oliver Queen and Roy Harper track Harkness down to his house. However, as the entrances are rigged with explosives, Digger is warned about the arrival of the two and escapes before they can even enter the house. In addition to the two vigilantes, an A.R.G.U.S. team is also hunting down Digger for murdering one of their own.

By using the ID of the agent he killed, Harkness manages to gain entrance to the A.R.G.U.S. headquarter. Although everything seems to work out at first, Harkness' cover fails and an agent tells him to stop moving, claiming that Harkness must be detained for a moment until the problems with his ID are solved. Harkness, however, is not ready to wait for his vengeance any longer and turns around and throws a boomerang at the agent, knocking him out. Without caring for his compromised plan anymore, Harkness storms further into the building and kills multiple A.R.G.U.S. agents with his bladed boomerangs. He fights himself through the agents, intending to kill Lyla. When the alarm is sounded, the rest of A.R.G.U.S. is alerted to Harkness' invasion. Diggle, who is present at the facility with Lyla, calls Oliver and asks him and the team for backup.

Inside the main hall, Lyla, Diggle and other agents are preparing for Harkness' arrival. He manages to surprise them nonetheless and kills several agents with boomerangs before they can even react. In the ensuing battle, Lyla is almost killed by another boomerang which is deflected by Oliver's arrow just in time. Harkness then engages Oliver and Roy in close combat, using his boomerangs as daggers. After kicking Oliver away from him, he tries to execute him by hurling two boomerangs at him but in the last moment, the boomerangs are caught by the Flash who has been called in by Oliver to assist in taking down Harkness. Surprised by Barry's arrival, Harkness decides to flee and throws a special boomerang in front of his feet, which creates a blast of smoke which Harkness uses as distraction to escape.

After A.R.G.U.S. realizes that all their bases are compromised while Harkness still has their ID, Lyla is brought to the Arrowcave for protection instead. There, they also realize that Harkness' boomerangs are made from a special manufacturer and intend to hunt down the man in order to get a lead on Harkness. After interrogating the manufacturer, Oliver obtains a cell phone from the man with which Harkness and the supplier used to keep in contact.

Bombs all over the city

The team manages to track down Harkness' "headquarter", where Barry easily takes out all of Harkness' hired goons. However, Harkness is not there and one of the men reveals that Harkness paid them to give Oliver a mobile phone. Oliver and Barry realize that they have been played by Harkness. Meanwhile, Harkness uses the phone the team took from the boomerang supplier to track down the Arrowcave. While Oliver and Barry are gone, following the false trace, Harkness enters the Arrowcave. He then attacks Lyla, who manages to obtain a gun. She fires at Harkness, who dives for cover. Both try to kill each other but the moment Felicity devices a plan to take down Harkness, he hits her in the chest with one of his boomerangs and seemingly kills her. Seconds later, Felicity throws a bomb-like device at Harkness which explodes and knocks him backwards. However, believing that he successfully killed Lyla Harkness leaves the cave as the others rush to Lyla's side.

Using facial recognition tech, Felicity manages to track Harkness down to the Central City train station where Harkness seems to plan to flee the city. To evade civilian casualties, Barry brings everyone out of the station before he and Oliver confront Harkness. Harkness, however, does not seem to be impressed and reveals that he has a contingency plan. He holds up a trigger, revealing that he planted five bombs all over the city. He states that the bombs are armed and that they will go off in 90 seconds. Harkness states that Barry can either take down Harkness or defuse the bombs, but he cannot do both. Barry immediately rushes off to find the bombs, leaving Oliver to engage Harkness. When he finds the first bomb, Barry is informed by the team that if he removes one of the bombs from its location, all other bombs will trigger and explode.

Harkness then attacks Oliver and eventually, Oliver manages to strap Harkness to a pillar by the neck. Oliver orders Harkness to stop the countdown but Harkness refuses even when Oliver threatens to torture him. Claiming to see in Oliver's eyes that he inflicted pain onto others before, Harkness wonders why Oliver is hesitating. While Barry is collecting members of both his and Oliver's team, delivering them to the bomb locations so that they can all defuse one bomb respectively, Harkness arrogantly tells Oliver that there are only ten more seconds and that the two should be able to see at least three of the explosions from their location. When he realizes that his bombs have been defused, Harkness spitefully spits at Oliver that if Oliver thinks that he accomplished something, he is mistaken. Harkness claims that not killing him makes him weak but Oliver replies that this only means that he still has some humanity left. As Oliver turns to leave, Harkness goes for one of the boomerangs hidden inside his suit but having anticipated that, Oliver flips around and shoots an arrow through Harkness' hand, pinning it to the pillar.

After his defeat, Oliver delivers Harkness to A.R.G.U.S. As Harkness is deemed too dangerous to be kept in a normal prison, he is incarcerated on A.R.G.U.S.' special prison complex on Lian Yu where he becomes the second inmate, the other being Slade Wilson.

Working to Prometheus and death

Three years later, Oliver is forced to return to Lian Yu after the serial killer Prometheus has kidnapped all of his friends and brought them to the island. As he cannot fight Prometheus and his allies alone, Oliver frees both Slade and Harkness from the A.R.G.U.S. cell in order to recruit them into helping him. Together with the two, Oliver returns to the shore where his other allies, Malcolm Merlyn and Nyssa al Ghul are waiting. Seeing the two criminals free, Nyssa makes an insulting comment but Harkness shrugs it off. Seeing how Harkness is eyeing her, Talia threatens to cut out his eyes and feed them to him should he look at her like that again.

When the team separates in order to cover more ground, Harkness and Slade accompany Oliver. Harkness eventually complains that he did not get a weapon but Slade did. Oliver replies that he trusts Slade more than Harkness and the surprised Harkness reminds Oliver that Slade killed Oliver's mother. Oliver then tells Harkness that he will walk free if he helps Oliver take down Prometheus and his crew but also threatens to put him right back in his cell should he try to screw with Oliver. The three then reach a clearing in the forest where Felicity, Thea, Curtis and the mother of Oliver's son are imprisoned in cages. While Oliver and Slade walk towards the cage, Harkness tells them that they are walking right into a trap. Indeed, Talia al Ghul and Evelyn Sharp jump off a tree, aiming their weapons at them. Furthermore, Harkness draws a gun himself and aims it at Slade, claiming that he got the gun from Prometheus, along with a better offer. The three then reveal that they deemed it useless to reach out to Slade but claim that he still has time to reconsider.

Slade then seemingly betrays Oliver as well and joins the three villains, but once the three turn their attention back to Oliver, he strikes. When Harkness states that he assumed Slade wanted to be on the winning side, Slade claims that assumption is the mother of all failures and strikes him hard in the face. While Oliver takes out Evelyn, a fistfight between Harkness and Slade erupts. Harkness is forced backwards and when Merlyn and Nyssa turn up as well, Talia and Harkness escape by using a smoke grenade as distraction.

Harkness is later sent out again to take care of the invaders and this time, he is equipped with his boomerangs. Together with a few of Talia's disciples, he tracks down Merlyn, who is leading the former hostages to safety. He hurls a boomerang at Thea but misses, alerting them to his presence. The rest of the group run on as Merlyn, who is standing on a landmine, waits in the open. Unaware of the landmine, Harkness approaches Merlyn and asks him what kind of weird strategy he is pursuing. Smiling, Merlyn states that he will show him and takes his foot of the landmine, causing it to detonate and kill Merlyn, Harkness and Talia's students.

Harkness mocks Oliver and his team 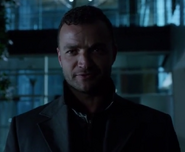 Harkness starts his attack on A.R.G.U.S.

Harkness is confronted by Oliver and Barry