Skilled usage of boomerangs and knives

Break away from Waller's control and escape from the Suicide Squad (failed).

He is an Australian thief who was sent to Belle Reve after being defeated by the Flash, and reluctantly joined the Suicide Squad to lighten his prison sentence. Though he originally intended to escape from Amanda Waller's control, but would assist his teammates in defeating the Enchantress before returning to prison. In 2021, Harkness was tasked by Waller to complete a mission on the island of Corto Maltese as part of Rick Flag's first team.

He was portrayed by Jai Courtney, who also played Eric in the Divergent series and Charlie in Jack Reacher.

Captain Boomerang is an Australian bank robber, gaining his nickname for his skilled use of boomerangs during his heists. After robbing every bank in Australia at least once, he went to America for new targets. Unfortunately for him, during one of these heists (after he used a boomerang to knock out his accomplice) he was taken down by the Flash.

After his capture, he was charged guilty in fifty-four counts of aggravated assault and ninety-eight counts of first-degree burglary. He was sentenced to a triple-life sentence.

When the squad is activated, Boomerang is injected with a nanite explosive into his neck and transported to Midway City inside a sack. After the sack is opened, Boomerang immediately attacks the nearest guard but is restrained at once. He equips himself with a set of blades and a stuffed pink unicorn before the squad sets out. When El Diablo states that all of them are walking straight into their deaths, Boomerang ignores it and makes fun of Diablo's tattoos, much to the amusement of Killer Croc.

After the helicopter has crashed in Midway City, Boomerang convinces fellow team member Slipknot that the talk about bombs implanted inside their necks is merely minded games and the two decide to bolt together. Harkness draws one of his boomerangs but is immediately detained by Katana. Slipknot, however, uses his ropes to escape and Flagg immediately detonates the bomb inside his neck. After Slipknot's death, Boomerang realizes how close he came to death right now.

After the group is forced to battle some of the Enchantress' henchmen, Boomerang confronts El Diablo for not fighting with them. Diablo states that it is better this way, as he does not want to use his powers ever again. Although Boomerang provokes the 'fire bloke', Diablo stays calm. Boomerang also attempts to steal a wristwatch from one of the beasts they killed, causing them to realize that they were fighting inhabitants of Midway City all along.

After they have entered the building where they are supposed to meet their target, Boomerang comments on the brief calm, calling their progress easy and sarcastically referring to their mission as a walk in the park. Deadshot is annoyed by his constant quips. Inside, the group is attacked by more of the hostiles. Boomerang is stabbed in the chest but remains unharmed due to his body armor.

When they arrive at the target location, they are shocked to find out that the person they are supposed to extract is Waller herself. Boomerang speaks up and advises to kill both Flagg and Waller to prevent going back to prison after the mission is done. However, Waller holds up her phone to remind them that she still has the power to explode any of them.

When their extract helicopter (revealed to be hijacked by the Joker) escapes with Harley Quinn, Waller orders Deadshot to kill her. When Deadshot deliberately misses Harley, Boomerang congratulates him on making the right choice. When Harley rejoins the team later, Boomerang welcomes her back and hands her baseball bat.

After Waller's escape chopper has been shot down, the rest of the squads heads into a nearby bar. There, the members start arguing, starting when Boomerang calls Harley nice to look at but ugly on the inside. The fight is broken up when Flagg enters the bar as well, smashing his wrist monitor and thus destroying his device allowing him to explode the nanites. He reveals to the squad that he has to stop the Enchantress but that all of them are free to go. Boomerang storms out of the bar immediately. However, he eventually rejoins the group.

After the Enchantress is defeated, Waller turns up to bring the squad back to prison. Although Boomerang furiously demands to be released, Waller forces him to stand down by threatening him with the nanite bomb in his neck. Boomerang is subsequently brought back to Belle Reve and Pinky confiscated from him once again, still angrily ranting and demanding to be freed, to no avail.

Although he does not physically appear in the film, Boomerang is seen on a photograph in the Gotham City Police Department building during Harley Quinn's attack on it in order to find and capture Cassandra Cain for Roman Sionis, with Harley remarking "Hey, I know that guy" upon seeing it.

Captain Boomerang reappears in this film as a member of Rick Flag's first Task Force X team sent to infiltrate Corto Maltese. Once he boards the helicopter along with his other teammates they are soon joined by Harley Quinn and the two warmly greet each other before the helicopter takes off. On the flight to their drop off point Blackguard questions if Weasel is a dog much to the amusement of Boomerang who mockingly asks him what kind of dog he thinks Weasel is, this prompts both The Detachable Kid and Harley to get in on the joke with the former suggesting he's an afghan hound while Harley excitedly suggests he's a werewolf prompting Blackguard to start panicking until Flag manages to calm him down by explaining what Weasel actually is.

When the team finally arrive at the drop off point they all take cover with Flag de-briefing them until Blackguard stands up and begins walking towards the Corto Maltese military, selling out his teammates and compromising the mission in a vain attempt to get freedom for himself, this ultimately results in Blackguard's death while the remainder of the team begin fighting the soldiers off, with Boomerang in particular managing to kill a good number of them with his signature weapons. In the middle of the ensuing chaos Mongal attempts to bring down a helicopter with soldiers inside and in the process accidentally crashes it into a tree sending multiple sharp pieces of bark to go flying into Boomerang's head, neck and torso. Knowing he's about to die Boomerang accepts his fate and gives a goodbye smile to Harley before getting shredded by the blade of the helicopter, much to her dismay. After his death Boomerang's dismembered hand still somehow remained, having a tight grip on the boomerang he was about to throw prior to his accidental death. 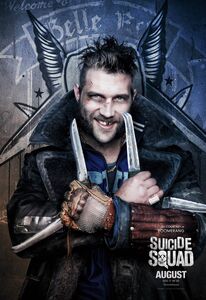 Captain Boomerang in a poster for The Suicide Squad. 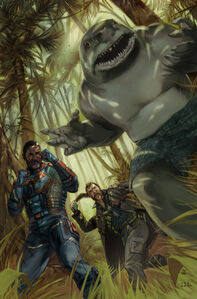 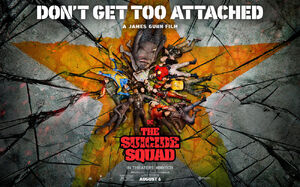 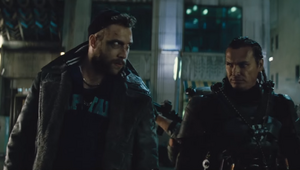 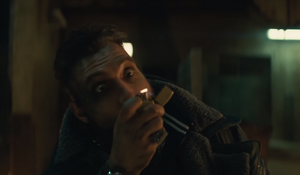 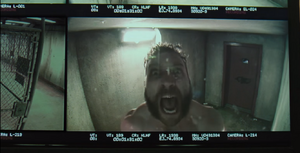 Boomerang angry about being imprisoned again. 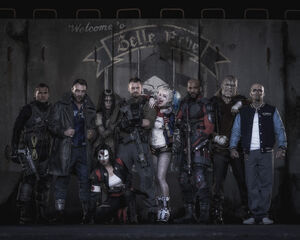 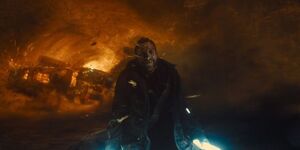 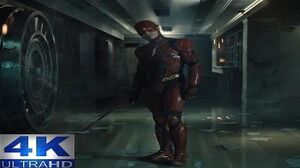