First Captain Chevalier is an alien warrior working for the Galactic Imperial Army Zone and a major antagonist of Chikyuu Sentai Fiveman. The self-proclaimed "Hero of the Galaxy", Chevalier is a fierce swordsman and the original captain of the Zone flagship Vulgyre until he left to roam to galaxy on his own. He later returns to the Zone to retake command after growing bored of his life of luxury. He is also the true master of the Galaxy Sentai Gingamen.

He was played by Kihachiro Uemura, who also portrayed Dai/Green Flash in Choushinsei Flashman.

Chevalier was the original captain of Zone's flagship Vulgyre and the one who first led their conquest of planets. After reducing many planets to ruin for Zone, Chevalier was allowed to retire by Galactic Empress Meadow and left Vulgyre to live a life of luxury and women. Eventually though, Chevalier grew bored of his life and decided to rejoin the Zone's invasion army.

Upon arriving on Earth in his own personal ship, Chevalier hatched a scheme to take over Earth by using his impressive singing voice to hypnotize its population into dancing to death. His bishounen looks and charisma drew him many female admirers including the female Fivemen and Doldora and Zaza, much to Captain Garoa's chagrin. Meadow was also pleased to see her most skilled commander back in action, and blushed and teared up upon hearing his voice. With the Gingamen and Galactic Warrior Kourogin provided background vocals, Chevalier entered into a song duel with the Fivemen, who sang their theme song to counteract his singing. Chevalier eventually used his singing voice to enlarge Kourogin, though the Galactic Warrior was destroyed by the Fivemen in Five Robo. Satisfied that he had seen the Fivemen's power, Chevalier decided to take his leave.

Chevalier would go on to hatch several more plots that came close to destroying the Fivemen. With Garoa's lackluster performance against the Fivemen, Chevalier was soon given back the position of captain of Zone's flagship, Vulgyre, while Garoa was demoted to janitor. To celebrate becoming Captain again, Chevalier held a lavish banquet for his fellow Zone executives. Desiring to feed his fellow generals what he saw as the best meat on Earth, Chevalier sent the Galactic Warrior Samejigokugin to kidnap humans and trap them in metal cans for them to ferment for three days until they were ready. After Samejigokugin trapped several young women in cans the Hoshikawa siblings showed up to fight it, but before they even knew what was happening the Galactic Warrior rose up out of the ground and grabbed Kazumi, trapping her in a pink can. Chevalier then appeared and explained his plan to the Fivemen who, despite their best efforts, were unable to stop Samejigokugin and lost Ken and Fumiya to it as well. However, Remi figured out that the Galactic Warrior was only targeting young women besides the Fivemen and used this to lure it into a trap, where Gaku was able to pull it out of the ground using a crane. Gaku and Remi then transformed into FiveRed and FiveYellow and used their attacks on the helpless Galactic Warrior, causing it to free everyone it had trap in cans.

Garoa was later able to win back his former rank by creating the Big Garoan and using it to destroy Five Robo, though he still had to share it with Chevalier. As Meadow had declared that only one could serve as captain of Vulgyre, Chevalier sought to win back her favor by using the Galactic Warrior Iwakasekigin to trap the Fivemen in stone. After trapping the other four Fivemen in stone, Chevalier captured Gaku and brought him aboard Vulgyre to turn him into stone personally in front of Meadow. However, Gaku was able to escape thanks to Gunther and soon uncovered the shocking truth behind Vulgyre, that the ship itself was a living being. It was then that Meadow appeared and stated that Vulgyre was an ally who would serve them in conquering the universe, and that the purpose of Zone's conquests was to power it up. Meadow then told Chevalier and the Galactic Commanders that they were not needed anymore and had Vulgyre take off to escape the city.

After Vulgyre crashed however, the visage of Meadow was revealed to be a projection from Vulgyre and Chevalier quickly realized that Meadow was an illusion. It was then that Vulgyre revealed himself as the creator of Meadow and true leader of Zone, turning Doldora and Zaza into a Combined Galactic Warrior after they refused to keep serving him. Despite this, Chevalier, along with Garoa and Dongoros, decided to keep serving under Vulgyre in spite of this revelation.

Following the death of Billion in combat against FiveRed, Vulgyre instructed Garoa and Chevalier to go out and defeat the Fivemen personally, as their blood was needed for him to assume his Galactic Super Beast form. Garoa attacked the Fivemen first, though Chevalier soon intervened and told Garoa to fight the other Fivemen while he battled FiveRed, to which Garoa reluctantly complied. After FiveRed stopped dueling Chevalier to help his siblings against Garoa, Chevalier summoned the Galaxy Sentai Gingamen to assist him in fighting FiveRed, though FiveRed was soon joined by his teammates. After the Fivemen destroyed the Gingamen, Chevalier challenges FiveRed to a "Chain Deathmatch", where an unbreakable chain would link them together until one of them died. To keep the other four Fivemen from interfering, Chevalier summoned the Black Gorlin, forcing them to pilot Five Robo against it. Despite putting up a valiant fight, Chevalier was ultimately defeated by FiveRed, though this turned out to all be part of Vulgyre's plan. In order to obtain the "Energy of the most powerful death in the galaxy", Vulgyre needed the deaths of, not the Fiveman, but Chevalier himself, as Chevalier had committed many murders across the galaxy and his soul was imbued with the blood of them, which would give Vulgyre the death essence he needed for his final metamorphosis.

After Chevalier exploded, Vulgyre absorbed his energy to complete his final transformation into his Galactic Super Beast form. 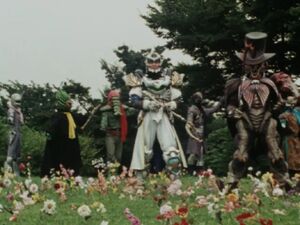 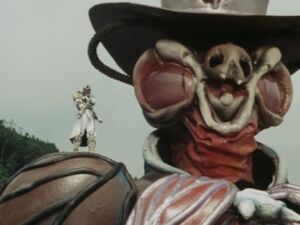 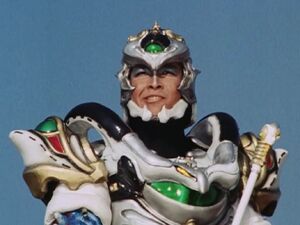