Avenge her sister's death by defeating the One Earth Regime

Take control of the world with The Society (both failed)

Leonard Snart, better known as Captain Cold, is a supporting antagonist of the 2017 video game Injustice 2. He is the criminal of Central City who fights against his enemy The Flash. He is also the leader of the Rogues and a member of the Society.

Leonard Snart and his sister Lisa were thieves in Central City who were commonly found fighting the city's hero, The Flash. After contacting the other villains who took on The Flash, he led a team of the Flash's rogues against him, but ultimately they were always defeated.

Following the destruction of Metropolis, Captain Cold confronted members of the Justice League in search of "information" on the Mirror Master.

Captain Cold confronts the Flash in Central City, with Flash dodging ice blasts from his cold weapons and demanding the location of the Mirror Master. When Flash pushes Cold's weapons against his shoulder and legs in the middle of the blast, freezing him in place, Cold hastily relents. He reveals the location of a villain bar called World's End in Keystone City, where the Mirror Master should be.

At some point later, Captain Cold was arrested and sent to an underwater super prison created by the Regime, where he was held for four years until he and the rest of the prison villains were released by Plastic Man, seeking to rescue. his son, and Snart ran away, but was arrested again, this time by Amanda Waller being forced to join the Suicide Squad.

Captain Cold appears onstage during Gorilla Grodd's speech to the Society. He is then seen walking with Grodd and a few other fellow Society members, warning Grodd that he shouldn't betray them. Grodd reassures him that he won't as long as they have a common agenda and sends him off with Cheetah to go with the first wave of soldiers. Before he leaves though, he tells Grodd about the lost shipment of fear toxin and that he hopes that his "silent partner" can still deliver.

He is later seen walking up to his old nemesis, Flash, wounded when Deadshot shot him in the leg and Captain Cold fires a cold blast on his injured leg. Flash then expresses shock that Captain Cold would go along with such a chaotic day. Cold agrees about how chaotic the situation is, comparing it to the day that Superman formed the Regime. Flash tries to convince him to aid him in helping the innocent people caught in the chaos, before Captain Cold angrily refuses, comparing them to his friends and his sister. Ignoring Flash's apologies about his lost friends and sister, he engages in battle with him, with Flash emerging the victor.

Soon, he teams up with Reverse Flash in attacking Wonder Woman at the Ace o' Clubs Bar. He attempts to freeze her, but Wonder Woman deflects it, causing Reverse Flash to be hit and freeze. Cold compliments Wonder Woman before the two circle each other. Before battling, Wonder Woman asks why Cold joined the Society. He explains that he did so to gain vengeance against the Regime for executing his sister. Wonder Woman replies that it was his fault that his sister died since he led her into a life of crime, which made her a target to the Regime. The two then fight, but Wonder Woman emerges victorious. He is not seen again for the rest of the story.

He, along with the other members of the Society, disband when he learns that Brainiac will destroy the Earth, rather than let them conquer it.

Captain Cold has a cold gun, which generates a cold field at absolute zero temperatures, completely draining the molecules of their kinetic energy, preventing them from generating movement. His Cold Gun can also fire jets of ice like lightning bolts, creating ice wherever they hit. Cold is a skilled tactician and has led the Rogues for many years. 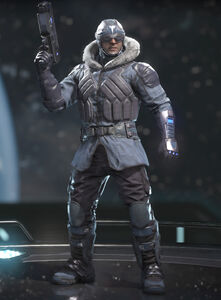 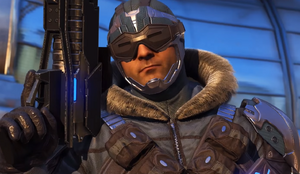 Captain Cold reuniting with The Flash 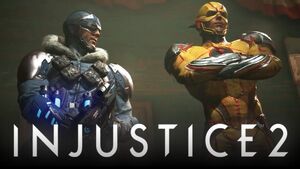 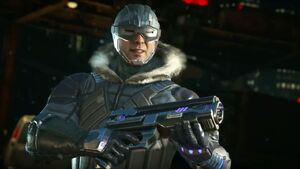 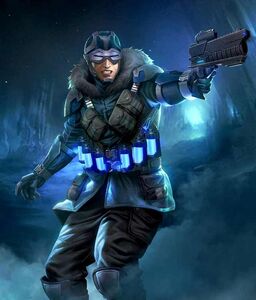 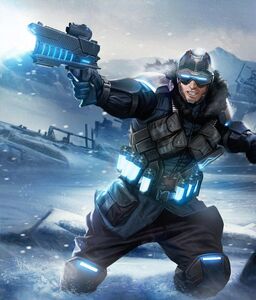 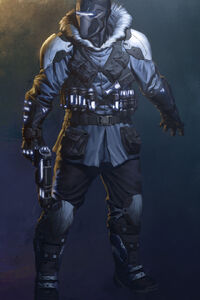 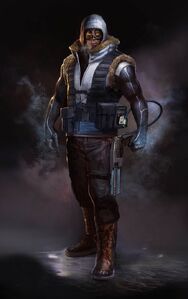