Captain Deadbeard is one of the secondary antagonists of the Plants vs. Zombies franchise. He is an undead zombie pirate who takes parts of fighting plants.

He first appeared in Plants vs. Zombies: Garden Warfare 2 as one of the playable characters on the Zombies' side. His primary weapon is Scurvy Scattershot, with the second is Spyglass Shot.

His Top Zombie variant is Ol' Deadbeard. He first appeared when the players entered his portal, he first asked the players to cure his pet shark Snaggles by contacting Dr. Daul Fin in Backyard Battleground. After meeting him, they had to defeat Champion Rose and retrieve the potion back to his ship. Finally, Dr. Daul Fin and the players had to shrink themselves to defeat all plants harming the shark.

He also returned in Plants vs. Zombies: Battle for Neighborville as a playable character of the Defend class on the Zombies' side.

Barrel of Deadbeards is a Premium - Legendary Pirate Barrel Zombie of Crazy class, which is based on Captain Deadbeard's ability, Barrel Blast. It costs 2, with the maximum health is 1. When destroyed, the barrel explodes, then deals 1 damage to all plants and zombies on the field, and make a Captain Deadbeard on the same lane.

Captain Deadbeard is a Token Mustache Pirate Zombie of Crazy class. The card costs 3, his maximum strength is 4 while his health is 3. When attack, Captain Deadbeard shoots his gun at a plant.

Captain Cannon is a Rare variant of Captain Deadbeard, who specializes in explosive damages with his close-range Scattercannon and long-range Extend-o-cannon.

In this game, Captain Flameface is a Mustache Pirate Zombie Event card of Sneaky Class. He costs 3, with his strength and health are 4/2. His traits are Strikethrough (he can deal with damages to all targets in a lane) and Gravestone (he can hide in the gravestone until it's time for tricks). When played, all other Pirate Zombies gain Strikethrough. Similar to Captain Deadbeard, he shoots his gun when attack.

Captain Sharkbite is a Super Rare variant of Captain Deadbeard. Unlike most other Captain Deadbeard's primary weapons, his close-range Snappy Shark costs only one ammo. His secondary weapon, Shark Laser, fires faster than the original.

Captain Squawk is a Super Rare and the final Pirate variant in the game. His mate, a sick seagull, can perform a close-range overheating toxic Flem Thrower and a single-shot long-range Gull Blaster that inflicts. toxic damages to plants.

The Parrot Pal is one of Captain Deadbeard's abilities. It is a bird that flies around to attack plants with its Parrot Pulse to assist the zombie team.

A variant of it is Future Parrot Pal, a mechanical parrot that moves slower but has more health and deals more damage than its predecessor. 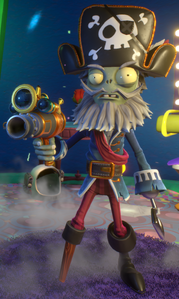 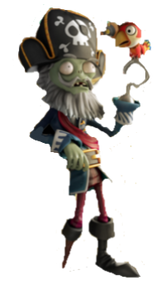 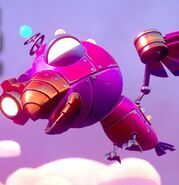 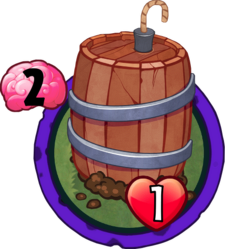 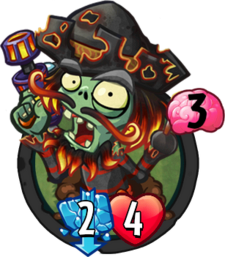 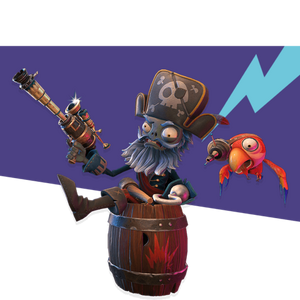 Retrieved from "https://villains.fandom.com/wiki/Captain_Deadbeard?oldid=4075876"
Community content is available under CC-BY-SA unless otherwise noted.