Pillage ships for treasure and hide them in his own island.

Captain Flint is the main antagonist from the 1883 adventure book Treasure Island by the late Robert Louis Stevenson.

Captain Flint is considered one of the most evil and selfish pirates in history - becoming a man of legend and the one responsible for burying the great treasure, which would eventually be sought after by Long John Silver (also known as the "One-Legged Man") and his crew.

In order to ensure that no one would be able to find his treasure, Captain Flint murdered six members of his crew, who helped him to bury the loot. It is then said that the murderous and egotistical pirate proceeded to leave the island and sailed off into the open sea.

Flint was said to die in a tavern in Savannah. On his deathbed, he kept drinking rum and singing infamous pirate chanty "Fifteen men on a dead man's chest". It is not entirely clear whether he voluntary gave Billy Bones the map of Treasure Island or Bones simply stole it. Bones himself suggests the former, and it seems somewhat logical, considering the fact how much Flint hated Long John Silver.

Captain Flint was only seen during the opening sequence, making a map to his treasure, leading his fifteen men to the cave where they buried the treasure and then killing them all. Once they were all deceased, he was last seen walking off to his ship, never to be seen again. He ostensibly died later, entrusting the map to Captain Billy Bones, his former first mate.

In this film, Captain Flint was still a cunning, dangerous and manipulative pirate; however, he is an alien as opposed to a human. His name is known as Captain Nathaniel Flint. During the opening portion of the film, he and his pirates were seen pillaging merchant ships and was notorious for disappearing without a trace when the pillaging was done.

Apparently, he had stolen Treasure Planet (the hideout where he personally buried his ill-gotten loot) from a highly developed species of unknown name; correspondingly, he also stole the teleportation expertise that he used to raid ships from the same species. Just like in the book, he trusted the map to Treasure Planet to Billy Bones. Also, before his death, he stole the memory chip/brain of his navigator, B.E.N., so that (the event somebody got lucky and found Treasure Planet without the map) nobody would find the treasure. As a final step, Flint (along with his ship) stayed with his treasure until his death.

Captain Flint was later seen (albiet as a corpse) in the core of Treasure Planet. As soon as B.E.N regains his memory, a trap set by Captain Flint was activated. Flint knew that someone from his old crew would come to steal his treasure, so he set up the planet to self-destruct upon the discovery of the treasure. 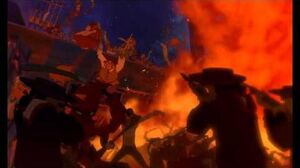 Space piracy in the Etherium and the legend of Captain Nathaniel Flint
Flint's pirates attack.
Add a photo to this gallery

Retrieved from "https://villains.fandom.com/wiki/Captain_Flint?oldid=3410209"
Community content is available under CC-BY-SA unless otherwise noted.