Villains Wiki
Register
Don't have an account?
Sign In
Advertisement
in: Super Sentai Villains, Right-Hand, The Heavy,
and 56 more

Dispersing Empress Meadow's orders to the other Zone Commanders.

Defeat the Fiveman and destroy Earth.

Captain Garoa is the secondary antagonist of Chikyuu Sentai Fiveman. He is the captain of the Galactic Imperial Army Zone's flagship and second-in-command to Galactic Empress Meadow.

He was portrayed by Takeshi Ishikawa.

After the Hoshikawa siblings' parents succeeded at restoring life on Sidon, Garoa and the Galactic Commanders appeared to attack them, as Sidon was one of the planets they needed destroyed in order for Meadow to gain immortality. He was shot and scarred by a young Gaku, which would later lead to a rivalry between them.

The Hoshikawa siblings succeeded in escaping Zone and returning to Earth, though their parents could not go with them. Earth would later become the 1,000th planet Zone needed to destroy in order to complete the ritual, bringing Garoa and Zone into conflict with the Hoshikawa siblings again, as they became the Fiveman to repel the Zone invasion.

Though appearing competent at first, his continued failures soon caused him to lose his standing with Empress Meadow. With the arrival of his predecessor Captain Chevalier and the destruction of his monster Goriwashigin, Garoa was eventually demoted from his position as Captain to be a janitor of Zone.

Seeking to regain his former status, Garoa discovered an energy source within Vulgyre, unaware of its true nature, and used it on a Gorlin to create the powerful robotic monster, the Big Garoan. Piloting the Big Garoan, Garoa destroyed Five Robo, only for the Big Garoan to be destroyed by a combination of the Fivemen's Earth Cannon and Arthur G6 in Magma Base. Despite this, because he had destroyed Five Robo, Garoa was awarded back his position as Captain, though he had to share it alongside Chevalier.

Captain Garoa would later learn the truth about Vulgyre after the ship crashed due to the flowers of Sidon and Meadow's illusion shattered. Despite this, Garoa continued to serve Vulgyre either out of fear or loyalty. To complete Vulgyre's transformation into a Galactic Super Beast, Garoa was sent out alongside Captain Chevalier to kill the Fivemen, as their blood was the last of the "death essence" Vulgyre needed to undergo his metamorphosis. While Chevalier dueled FiveRed, Garoa fought off the other four Fivemen, only to have his left horn on his helmet chopped off when FiveRed chose to interfere. However, it would turn out that Vulgyre desired not the blood of the Fivemen but the blood of Chevalier, who had committed countless murders across the universe and been charged with his victims' blood. After FiveRed slayed Chevalier and Vulgyre absorbed his blood, Garoa became ecstatic that Chevalier was gone as it now meant he was sole Captain of the Vulgyre.

A delusional Garoa proclaimed himself Captain of Vulgyre and attempted to board his former ship in order to conquer the universe with him. He was soon confronted by the Fivemen, who chopped off his other horn. Later, as Vulgyre collapsed, Garoa found himself trapped within the coffin of Meadow, being the last surviving member of Zone aside from Dongoros. Garoa died alongside Dongoros as Vulgyre exploded. 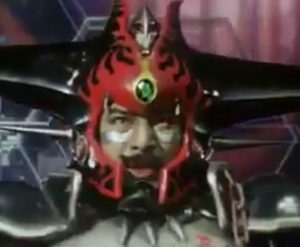 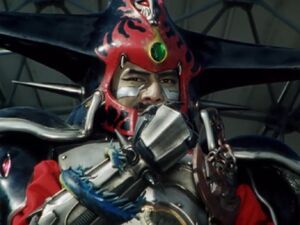 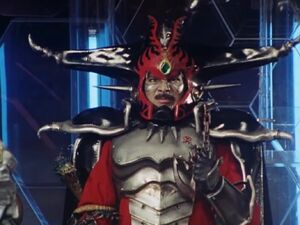