Captain Greasebeard is the main antagonist of the video game Pirate Blast. He resembles a robotic pirate that often carries an umbrella as a weapon and a means of avoiding getting soaked (the robots are killed by water). The player has to defeat him multiple times in order to restore Vile Isle.

Before the events of the game, Captain Greasebeard was a mere animatronic pirate captain for Vile Isle, which was scheduled to open very soon. However, Greasebeard went mad; his condition became so bad that he believed he was an actual pirate.

Soon, several animatronics known as Pirates- along with their superiors, the Henchbots (some of which were selected to be Greasebeard's personal bodyguards) -and a few Monkeys had their programming redone and rallied under his banner. In very little time, Greasebeard began to take over the whole island, ending up in conflict with the Soldiers (robots who had remained loyal), locking up the innocent citizens of the park- the Colonials (robots who were also loyal, but refused to fight) -and also stealing all of the gold from the island (even though the gold was fake).

During the start of the game, he appears in Vile Isle's town on top of a gate-like building, telling the player to leave, as this is now his turf. He orders his men to give the player the boot, then loses his balance and falls off of the roof. He is later seen running across the rooftops, using his umbrella to keep balance.

Later, Greasebeard is encountered on board his ship, apparently taking a drink to recharge his batteries after a long, hard day of pillaging. Calling in his Hench-bots to deal with this unexpected and unwanted intrusion, he then hops out the window.

Sometime later, he is met on the island of the Tincannibals- a group of animatronic robots that cannibalize other robots. Thanks due to his tinkering, the Captain was able to brainwash them into becoming more of his minions. Telling the player that they plan to cook him/her in a pot of stew, the Captain then leaves, letting his new allies capture the player and knock him/her out.

After escaping the Tincannibals, the player finds the Pirates loading a small ship with gold and then fights Greasebeard for the first time. Just when the player is about to defeat Greasebeard, however, he runs away on his gold-loaded boat. The player follows him downriver via a similar boat.

Following his being cornered in his own cabin, the Captain had no choice but to fight. Having been beaten a second time, Greasebeard beat a hasty retreat out the window of his ship; however, during his escape, he dropped a golden cog (which is revealed to be faulty and thus explains the Captain's odd behavior). This cog- a Cognition -was vital to his survival, as it served as his power supply. The player is informed that he/she must fight Greasebeard at least three more times to collect the remaining Cognitions and shut down the manic machine for good. However, before going off on the second trek through the park, the player is warned that Greasebeard will get angrier and angrier each time he loses one of his Cognitions.

Throughout all three return walkthroughs of Vile Isle, Captain Greasebeard does the exact same thing; however, during the battle in Greasebeard's cabin at the end of each walkthrough, Greasebeard can withstand more hits before he runs off (i.e. he takes three hits before running away the first time, four hits the second time, five the third time and six the fourth time). After the last battle, instead of jumping out of the window, he grabs a rope and climbs out of his cabin.

Having been beaten for the eighth and final time, Captain Greasebeard attempted to escape from his ship, but his peg leg got stuck in a hole in the floor of his ship and, as he was trying to break free, he was defeated by a cannon shot from a revenge-seeking Colonial and a couple of Soldiers. Having been nailed by a water balloon (which was the ammo for the cannon), he shorted out and deactivated. He was last seen getting sent to do amusement park cleaning as punishment (along with his yellow Henchbots, which he put a request in for) after being reprogrammed. 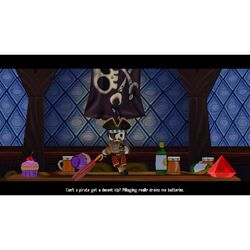