Day of the Dead

Threatening everyone under his jurisdiction, including his own men.

Wipe out all of the zombies (failed).

Kill the scientists and other survivors (partially succeeded).
Trap the survivors and leave them to die at the hands of the zombies.
Escape the underground facility and use the helicopter to get to safety (both failed).

Captain Henry Rhodes, also known as "H-Rhodes, is the main antagonist of George A. Romero's 1986 zombie horror film Day of the Dead.

Captain Rhodes was a U.S. Captain who took charge of a military operation in search of a cure to a global zombie epidemic. However he became aggressive and psychotic due to constant failure, pushing everyone to their limits and wanting to kill the scientists and civilians and escape the zombies with his troops.

He was portrayed by the late Joseph Pilato.

There is very little information known about Henry Rhodes' life before the events of the film.

Henry Rhodes was a United States Military Captain who was part of a military operation that was ordered to protect a group of civilian scientists who were searching for an end to the zombie epidemic. Initially, Rhodes was one of 12 soldiers in the assigned unit, along with his superior Major Cooper, Private Steel, Private Rickles, Private Miguel Salazar, Private Torrez, Private Miller, Private Johnson and 4 other unnamed and unseen soldiers. At first, Major Cooper was in charge, while Rhodes presumably served as his second in command. However, after the deaths of Cooper and the 4 unknown soldiers, at the hands of the zombies, Rhodes took over as base commander, using Pvt. Steel and Pvt. Rickles as his main enforcers and henchmen.

Captain Rhodes is a cold, ruthless and psychotic authoritarian who uses intimidation and death threats to subjugate and threaten those who he sees as of lesser importance, namely the scientists he was assigned to protect. While his personality before the zombie apocalypse is unknown, Dr. Fisher stated that Rhodes was an asshole even when Cooper was still alive and in charge. He's shown to be willing to kill those who disobey his orders or question his authority with little to no hesitation, showing how homicidal he's become.

He also displays no compassion or worry towards the scientists trying to find a solution to the zombie crisis, finding them to increasingly be a nuisance and their research pointless given the irreversible state of the world as they know it. He especially despises Dr. Logan aka "Frankenstein" as the latter keeps rebuffing his orders and keeps wasting his time, exhausting resources and endangering the people, all just for lab experiments. This tension grows when he discovers Bub, and reaches it's breaking point when he finds out what Logan did to his deceased soldier's corpses, finally killing "Frankenstein."

He's also shown to be very delusional, thinking that just shooting the zombies and getting out of the facility is the best option, despite Dr. Logan clearly pointing out the flaws in that plan. Even after this, he still believes it as the best action to take.

He treats his soldier like any captain would, keeping them in line and have them perform their duties, although due to the situation and the dwindling supplies, his mental problems have made him more aggressive towards them and puts them in their places through fear. He's even willing to threaten their lives if they don't follow his orders, like when he forced Pvt. Steel attempt to kill Susan by threatening to shoot him.

He doesn't seem especially bothered or concerned by their degrading psyches as well, showing no sympathy for Miguel's suicidal tendencies and allowing his men to cackle like maniacs and spout out obscenities towards the civilian scientists, only ever getting annoyed with them whenever they get distracted. This may be due to Rhodes' sanity decreasing as well, though he still has enough to prevent them from

Despite this, he's shown to be genuinely enraged whenever he loses one of his soldiers, like when Miguel got two of them, Pvt. Miller and Pvt. Johnson, killed during a mission to round up zombies for testing, Rhodes was prepared to have him killed, or when he learns that their bodies were being used by "Frankenstein" to feed Bub, which led to the doctors' death. However when the zombies start to slowly flood the facility towards the end, Rhodes reveals himself to be a traitorous coward, leaving his own men behind and locking them out, which eventually leads to them getting brutally dismembered and eaten by the zombies.

He's also shown to be extremely tenacious, as shown in the climax. Even though the zombies have overrun the facility and he's the only one left alive, he arms himself with guns and ammo and intends to shoot his way out. This is also seen when he's confronted by Bub, who wants revenge on Rhodes for killing Dr. Logan aka "Frankenstein." Despite being defenseless and suffering from severe gunshot wounds, he continues to try and escape from him, only to die in vain. 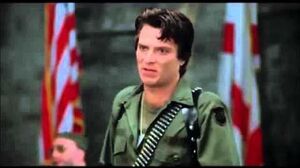 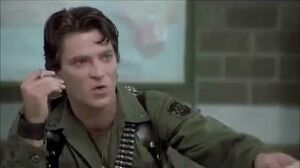 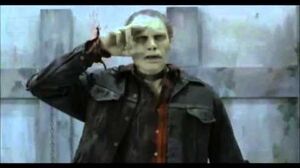 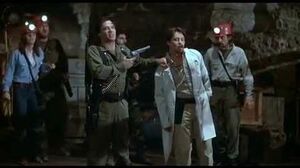 Day of the Dead (1985) - Open The Gates!
Rhodes mercilessly kills Dr. Fisher, forces Sarah and Bill to face a horde of the zombies, and has Pvt. Steel beat up John the helicopter pilot to make him help in their getaway. 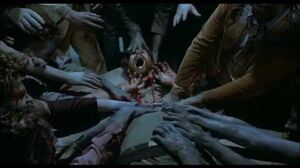 Day of the Dead The beginning of the End
Rhodes' cowardice and traitorous nature is revealed when he leaves his troops behind and traps them with the other zombies, resulting in their horrific deaths. 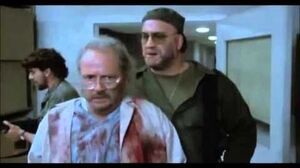 Day Of The Dead The Death Of Dr. Logan
Rhodes discovers what "Frankenstein's" been doing with his dead soldiers' remains and executes the doctor himself. 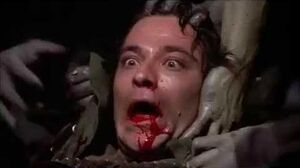 Day of the Dead (1985) death of Captain Rhodes
Captain Rhodes' long and horrific death.
Add a photo to this gallery

Retrieved from "https://villains.fandom.com/wiki/Captain_Henry_Rhodes?oldid=3848615"
Community content is available under CC-BY-SA unless otherwise noted.