Captain Leslie Hero, better known as Captain Hero, is the villainous main protagonist of the animated series Drawn Together. Despite being depicted as a "superhero", arguably the most often wears a behavior of a villainous character, and almost always uses his superhero talents in the worst situations, or using them to their advantage. Practically he is a satire and parody of Superman and other superheroes.

He was voiced by Jess Harnell, who has also voiced the Hot Topic Manager and Mickey Mouse within the same show, some of the Spooky Island Demons in Scooby-Doo, Ripper Roo and Pinstripe Potoroo in the N. Sane Trilogy, some of the Bandar Log in The Jungle Book 2, Lock in Kingdom Hearts, Buster's singing voice in Lady and the Tramp 2: Scamp's Adventure, Cedric the Sorcerer in Sofia the First, Moneybags and Red in Spyro: A Hero's Tail, Scary Terry in Rick and Morty, Pan in several Tom and Jerry films, Meldar Prime's singing voice in The Adventures of Jimmy Neutron, Luigi in Deep, Tim Gruber in The Cleveland Show, and Pocket in Tangled: The Series.

Captain Hero is a deranged, chauvinistic, perverted, antiheroic, hetero-flexible, and lecherous parody of Superman (and other superheroes), with a visual style taken from the cartoons of Bruce Timm and Max Fleischer. Most of his humor revolves around his perverse sexual tastes, his tendency toward violence, or his stupidity. There is also a running joke in which he is heavily suggested to be pansexual and interested in rape (which he commits against Xandir and even his own parents at least once) and necrophilia. Among reality TV archetypes, he represents the macho egotist.

In original artwork before the show's release, Captain Hero wore tights, and his suit was slightly darker in color and had a different symbol on it.

Of all the housemates, Captain Hero saw the most character development over the series. In fact, the fans complained that he might have had too much development, as he was the central focus of so many episodes, while Princess Clara, Wooldoor Sockbat, Foxxy Love, Toot Braunstein, Xandir, Ling-Ling, and Spanky Ham were practically relegated into his supporting cast. But the writers had reasoned that this was largely due to him being the easiest character for whom to write.

Captain Hero's relationships with the other characters also seem to be the most obvious and fleshed out. He is best friends with Spanky and Wooldoor (and is occasionally friends with benefits with the latter), and he appears to be on fairly good terms with Clara and Foxxy. He seems to have very little relationship with Ling-Ling, and he, like the other housemates (save for Xandir, at times), seems to absolutely, utterly despise Toot. However, Xandir is probably the one with whom he shares his deepest connection, as the two can be confidants with each other over the most personal of things. In fact, by the series conclusion, the two even fall in love and, if not for the accidental erasing of the entire cast, likely would've ended up in a romantic relationship.

In the first season, Hero was a simple character with a fairly minor role on the show. He was introduced in the first episode as simply "another person in the house", and (as his voice actor, Jess Harnell, puts it) his personality was that of a "big, dumb frat guy" whose libido was his main source of humor. Over time, however, he grew considerably more complex. Consequently, his role was expanded to the point where he became the most frequently used on the show (as stated previously).

"The Other Cousin" was the first episode to focus on Hero, but it was the second-season episode "Little Orphan Hero" that proved to be a major turning point for the character. In the episode, Hero, after suffering a nervous breakdown, meets his parents for the first time and sees many long-dormant emotional issues rise to the surface. Subsequent episodes would expand on these developments. By the time of "A Very Special Drawn Together Afterschool Special," it seemed perfectly natural for Hero to be cast in the role of the sensitive and caring (if overly emotional) nurturer.

Captain Hero has not been seen doing many activities commonly associated with superheroes. He has an "archnemesis" named Scroto, an obvious parody of Lex Luthor, whose "villainous" activity always involves tricking Hero into washing his testicles, in which he says each time, "You bolls are clean." He is able to fly (although many jokes involve him not using that ability, or it not working as expected) and punch through walls, use laser vision (which he used in very few episodes), and once used his "Hero Shield" (which involved using an innocent woman to shield himself from bullets).

Despite his questionable abilities as a superhero, the world has seemingly been very dependent on Captain Hero to save the day, as it is a common sight to see news reports on disasters and the comment "Captain Hero, where are you?!" According to Harnell, Hero's most recognizable line is “Save yourselves!” Whenever there is trouble, he takes off and leaves those who he had left behind to die. Harnell also uses the line when he signs autographs as Hero.

The Drawn Together Movie: The Movie!

The Drawn Together Movie: The Movie! 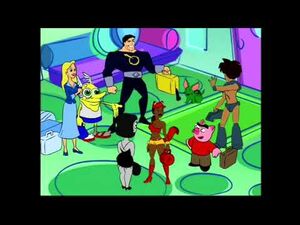 Drawn Together Pilot Footage
Captain Hero as he appeared in the unreleased pitch pilot.