drinking until he gets drunk with his mate Joxer Daly

Stay out of work and leave his family in absolute poverty. (achieved)

Captain Jack Boyle is a character in the play "Juno & the Paycock" by Sean O Casey. He is the wife of the title character Juno and father to their two children Johnny and Mary. He is an irresponsible drunkard who avoids work at every opportunity despite the family's poverty. He spends all his time drinking with his mate Joxer Daly in a pub. Despite this he seems an unlikely villain in the early stages of the play.

The family are told that they will inherit money from a distant relative who has died. Bentham is the solicitor who informs them of this fact. He begins to have a relationship with Mary and she becomes pregnant. Bentham shortly after this abandons her. The family begins to borrow money and accumulate a great deal of debts.

The legacy never materializes, and the family is forced to return the borrowed goods. When his family needs him, Boyle is not there. His son Johnny is dragged off to be shot for the betrayal of a fellow soldier. Juno finally realizes that Jack will never take on his responsibilities as father and breadwinner and so she leaves him and sets up home with Mary.

Some time later, a heavily inebriated Jack returns home with Joxer, unaware that his son is dead or that his wife and daughter have left him. After a brief conversation, Jack accidentally drops his last sixpence on the floor; he drunkenly mourns that "the whole world is in a terrible state o' chassis" before passing out. Joxer steals the coin and walks out, leaving the unconscious Jack on the floor of the empty flat, penniless and alone.

All of this makes Jack emerge as the Villain.

The play was adapted by Alfred Hitchcock into a film in 1930. Boyle is portrayed by Edward Chapman. 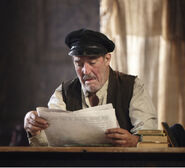 Jack Boyle during the play

Jack with his wife Juno.

A heavily drunk Jack at the end of the play.

Jack Boyle as he appears in the 1930 Alfred Hitchcock film adaption, portrayed by Edward Chapman.
Add a photo to this gallery
Retrieved from "https://villains.fandom.com/wiki/Captain_Jack_Boyle?oldid=1570607"
Community content is available under CC-BY-SA unless otherwise noted.