Captain of the Jolly Roger ship

Leader of the Pirates

Kidnap Peter Pan's children to lure him back to Never Land (briefly succeeded).

Kill his sworn enemy Peter Pan and take over Never Land (all failed).

Captain James Hook is the titular main antagonist of the 1991 film Hook, which serves as a sequel of sorts to the original Peter Pan story by J.M. Barrie.

He is a pirate captain from Neverland who seeks revenge on his old arch-nemesis Peter Banning (known as Peter Pan) by kidnapping his kids so he could eventually attempt to turn them against their father.

He was portrayed by Dustin Hoffman, who also played Mumbles in Dick Tracy and Ratso Rizzo in Midnight Cowboy.

Years ago Peter Pan cut off Hook's left hand, and fed it to a crocodile who had previously swallowed an alarm clock. After which, Hook replaced his missing hand with a hook. All the time Peter Pan had been humiliating Hook for a long time. Since then Hook has been seeking revenge on Peter Pan. The two have been battling each other for a long time, until one day Peter decided to stay and marry Wendy's granddaughter; Moira so he could be a father. During that time, Hook managed to kill the crocodile and turned it into a clock tower that doesn't making a ticking sound. However he still remained terrified whenever he heard a clock ticking, paranoid that the crocodile was coming back and smashed every ticking clock he saw. He also found Pan's home and burned it when he didn't return to Neverland.

Hook eventually found out what happened to Peter Pan, and that he was all grown up, was married and was a father of two. So he decided to exact his revenge on Pan.

While Peter's family is visiting his wife's grandmother Wendy, in London, Hook arrived in the middle of the night and kidnaps Jack and Maggie, Pan's kids. However, by this time, Peter, now known as Peter Banning, had forgotten about his previous life in Neverland. With the help of Tinkerbell, Peter arrived in Neverland. Eventually Peter, disguised as a pirate, came across Hook. Hook gloated to his crew that he was the one who kidnapped Peter Pan's kids, and tossed one of his crew into a torture devise known as the Boo Box for doubting that Hook could kidnap the kids.

However, Peter blew his cover and told Hook that those were his kids. Hook was surprised that the person he was talking to was Peter Pan. He decided to let Peter's kids go, if Peter could touch both of his kids' hands. Hook was hoping that Peter would fly to rescue his kids, but after witnessing Peter climbing to try to reach for his kids, Hook realizes that Peter had forgotten that he was Peter Pan. So Hook decided to cancel the war between each other and was about to kill the three.

However, Tinker Bell showed up and managed to convince Hook that if he gave her three days, both she and The Lost Boys could put him back into shape and he could have their war. Hook accepted her offer, but not before forcing Peter to walk the plank. While Peter was training for the next three days so he could defeat Hook, Hook was trying to influences both Jack and Maggie to turn against Peter Pan. Maggie was able to ignore Hook, but Jack ended up being persuaded by Hook, and eventually joined Hook's crew.

After regaining his memory and ability to fly much to Hook's joy, Peter Pan and Hook began their war. During the fighting between the Lost Boys and Pirates, Hook confronted Rufio in sword combat, and ended up killing him. After witnessing Hook murdering Rufio, an angry Peter confronted the pirate captain. After seeing his father care so much about one of his own Lost Boys, Jack reverses his decision to join the pirates, prompting Peter to ignore Hook and leave with Jack to join Maggie and the other Lost Boys. Hook however, is not amused and furiously beckons Peter to come back and duel with him or else he would never stop hounding him and kidnap future generations of his family.

Deciding to end Hook's threats once and for all, Peter accepts and they have a one-on-one duel with Peter mocking Hook for his fear of ticking clocks, stating that they weren't a reminder of the crocodile but Hook was afraid of time itself ticking away. In the end, Peter is victorious but at the request of his children saying that Hook is only a spiteful man without parents who can no longer hurt them, spares the captain's life, and simply tells him to leave Neverland and never return.

Unfortunately, Hook does not redeem himself and grabs an off guard Peter, while saying "Fools. James Hook is Neverland".

Hook prepares to kill Peter with his infamous hook, but Tinker Bell intervenes and Hook ends up stabbing the crocodile clock tower, apparently bringing it back to life. And in a rather dramatic fashion, it falls over a terrified Hook, and eats him for good, avenging Rufio's death. Peter Pan and the Lost Boys are victorious and the ultimate war is officially over. Peter went home with his kids back to London and leaves Thud in charge of the Lost Boys. 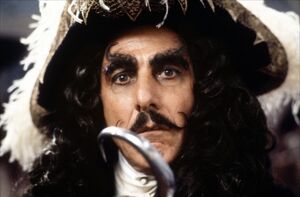 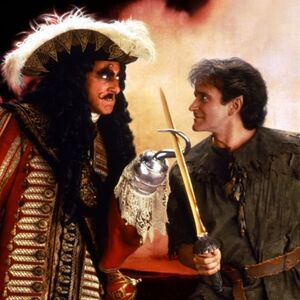 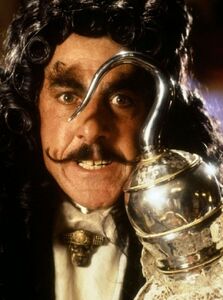 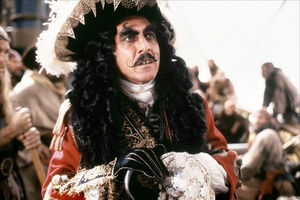 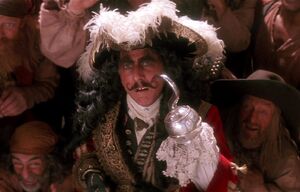 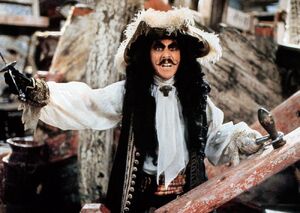 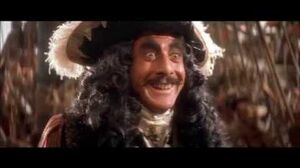 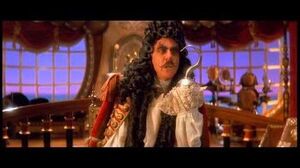 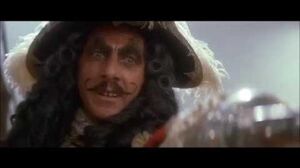 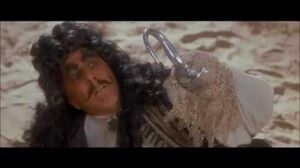