Villains Wiki
Register
Don't have an account?
Sign In
Advertisement
in: Tom and Jerry Villains, Charismatic, Traitor,
and 39 more

Tom and Jerry: The Movie.

Get the $1 Million Reward (failed).

False imprisonment (by trapping Robyn Starling on a ferris wheel)

Captain Kiddie and Squawk are supporting antagonists in Tom and Jerry: The Movie.

He is a traveling performer and the manager of a carnival. He claims to have traveled the world as a performer and showman, having a illustrious (albeit short-lived) career in show business. To the viewer, however, this appears to be in very much doubt. When Robyn asked where Tibet was, he claimed that Tibet was 'just outside of Cleveland', which is obviously false. Tibet is just outside of China. So, Captain Kiddie is pretty much an uncultured hack at best and a pretentious con artist at worst.

Captain Kiddie has a split personality, which manifests itself in his puppet, a parrot named Squawk. Through Squawk, Captain Kiddie is critical and self-deprecating, however, he is also realistic and reasonable. For instance, during the song and dance, "I've Done It All", Captain Kiddie tells all the tricks and theater productions he has done, while Squawk marginalizes them. Perhaps, it can be inferred, the Captain realizes how much of a hack he truly is but is uncomfortable to come to terms with it.

At first, after rescuing Robyn, he appears as a nice guy. However, when he realizes that $1 million was offered by Aunt Pristine Figg for Robyn's return thanks to Squawk, he immediately gets greedy, trapping her on top of the ferris wheel against her will and calls Figg who he believes is merely a strict parent rather then an evil abuser. However, Kiddie falls asleep while waiting for Figg and Tom and Jerry manage to rescue Robyn just when Figg and the rest of the involved arrive. While Tom and Jerry ran off with Robyn, Captain Kiddie (and the other crooks) try to pursue them, each hoping to get the reward. For such, Captain Kiddie and Squawk take a lifeboat with engine and the chase starts.

During the chase, a wooden bridge gets destroyed and Dr. Applecheek falls with his ice cream cart into the creek just when Captain Kiddie and Squawk are about to reach Tom, Jerry and Robyn, causing Captain Kiddie and Squawk to get send towards the broken bridge while letting Dr. Applecheek to float aboard the ice cream cart on the creek, leaving Captain Kiddie dangling from the bridge. It's completely unknown what happened to Captain Kiddie after this, but if he didn't lose his balance nor fall into the creek and drowned, it's possible that he climbed to safety and later found out from Daddy Starling that Robyn was telling the truth about Figg being evil who lied about the rewards. 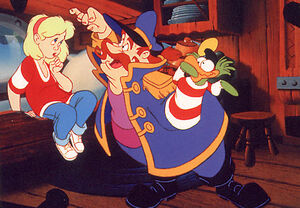 Captain Kiddie and Squawk with Lickboot, Ferdinand, and Dr. Applecheek. 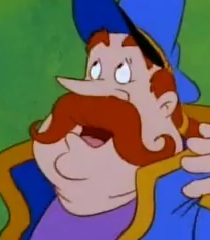 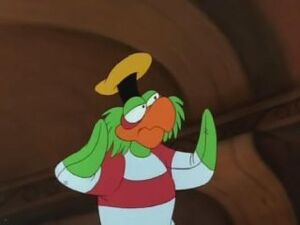 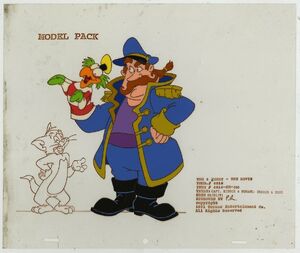 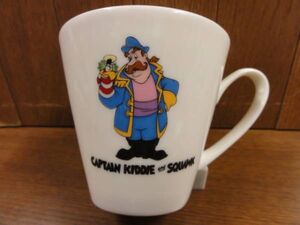 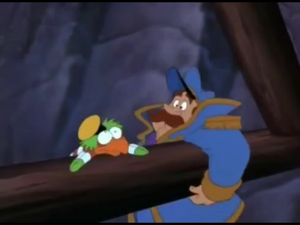 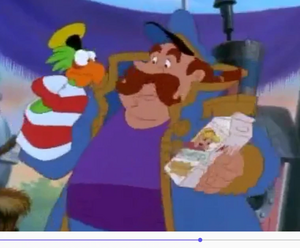 The duo looking at the milk carton with Robyn Starling's face and the fake one million dollar bounty.