Captain Liliana is a Pirate Captain who earned a infamous reputation laying waste to the ships in the Continent’s coastal waters. Never captured by the Navy, fellow pirates, or any kind of pursuers, it’s said that she was attacked by the Kraken and met her end in a watery grave. And now it seems she has been resurrected by The Swamp Witch’s immense magical powers to become the spearhead of her army in her plot to take over the Continent.

Liliana wears a black pirate hat with pink frills and a big red ribbon on the side. On her torso she has a black overcoat with pink frills near the bottom, and a short red shirt underneath. Beneath this she wears red star-shaped pasties over her nipples. She has a small black skirt also with pink frills and a belt with a steering wheel of a ship as a buckler. On her legs she wears knee length black boots. She also wears a white choker on her neck, with gold lining and on the center it features a green hexagonal gem and a layered frilly white bowtie.

Liliana won’t be bound by anything other than the only thing in the world that she honors, the “Pirate Aesthetics” written by her esteemed grandmother, the Pirate Queen Artemis, who’s also her parental figure. Even though she's known for being a scoundrel, having elegant manners like a noble is one of the rules from the aesthetics she must follow. Any means is valid for this purpose, but she can’t be completely cold-hearted. She’s unusually weak when it comes to the elderly and she treats them with great care.

Liliana fights with a Rapier and a hand-crossbow. With the Swamp Witch’s magical power, she was granted the ability to control a flying ship and its phantom crew members. It’s a splendid ship, but as the time passes it becomes a crumbling phantom ship and then vanishes. 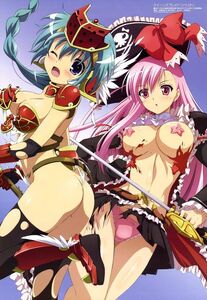 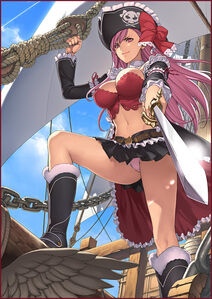 Captain Liliana on her ship 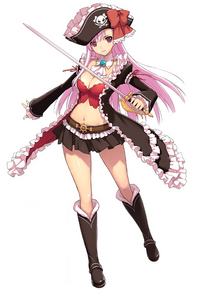 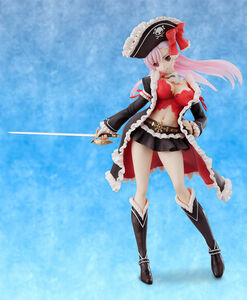 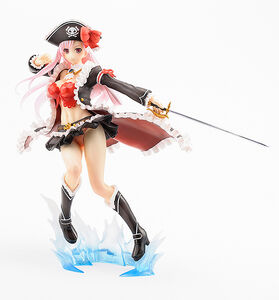 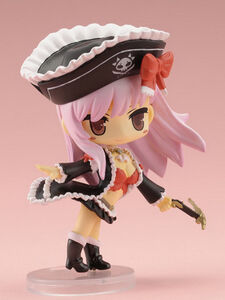 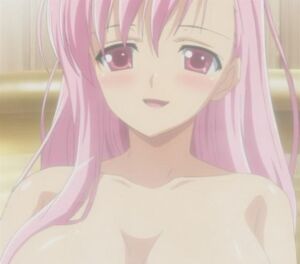 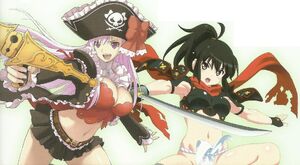 Captain Liliana & Izumi
Add a photo to this gallery

Retrieved from "https://villains.fandom.com/wiki/Captain_Liliana?oldid=3534438"
Community content is available under CC-BY-SA unless otherwise noted.