Collecting the teeth of heroes he has killed.

Discover the secret of the Coralax.

Kill anything that crosses his path.

Gideon Ray, more commonly known as Captain Mako, is one of four commanders known as Patrons in the super-villain group known as Arachnos in the M.M.O., City of Villains. Mako is specifically in-charge of Arachnos's stealth-solider unit - the Bane-Spiders. Along with his capacity as a Patron, Mako is Lord Recluse's right-hand assassin. If Lord Recluse has a specific threat that earns his attention, Mako is called in to resolve the situation. Unlike the rest of Lord Recluse’s inner circle, however, Mako is called in for search and destroy missions. With a very high threat needed to warrant Mako's deployment, such targets are not to be captured, interrogated or quietly observed; Mako is called in specifically when the desired target is to be killed with extreme prejudice.

Gideon Ray was a mutant born in Paragon City. His mutation resulted in gills and shark-like teeth. Gideon's parents could not deal with his deformities, so they left him at an orphanage. Gideon's mutations grew more and more apparent as he matured. He was taunted endlessly by the other children for his increasingly in-human appearance. Though the grizzly particulars are lost to time, Gideon disappeared after the violent deaths of several of the other orphans, he is presumed to have snapped due to the mounting bullying. After the massacre, Gideon vanished, his body was not found among the rest of the orphans and the name Gideon Ray would not arise again till years later. The details of his time in hiding are unknown, but, when he reappeared, he was pursuing a life as a modern-day pirate. His fellow pirates were the first to devise the nickname “Mako”, after the mako-shark he resembled in adulthood. Mako's vicious nature and marine-mutation quickly worked for him and he became first-mate. Following an “accident” that claimed the captain's life, Mako took-up the role as new captain for the crew.

Mako started looting the criminal friendly Rogue Isles and became particularly fascinated with the island known as “Sharkhead Isle”, if only for the name. He frequented the water of Sharkhead Isle to intercept shipping for long enough to the point where he considered the area to be his territory. The frequent raids started to become an issue for Arachnos, who did most of the shipping from the area, enough so that Lord Recluse eventually put out a price on the pirates' heads. On top of the raids at the time, there was a rebellion underway on the Isle of Sharkhead. Arachnos's semi-slave-labor force, the Scrapyarders, were revolting against the Cage Consortium, a private security force under contract from Arachnos to over-see local issues on Sharkhead. The Cage Consortium's C.E.O., Kirk Cage, stood to lose a lot of business from the revolt and hired Mako to keep the leader of the revolt, a super-hero named Scrapyard, from causing major property damage to Cage assets. Mako attacked Scrapyard on his protest march across the isle. Even after the initial strike by Mako, Scrapyard kept marching with resolve to set an example for his people. Mako would strike repeatedly against Scrapyard until he was completely dismembered by the sadistic mutant pirate. Mako's service averting a major upset to Arachnos's business partners on Sharkhead, to say nothing of the sheer level of ferocity involved in doing so, lead Lord Recluse to make Mako an offer he couldn't refuse; Lord Recluse would not only call off the bounty on Mako, he would make him his right-hand assassin.

Unlike the other members of Lord Recluse's inner circle, Mako has no sentimentality or depth. Mako is a blood-thirsty monster and fully aware of the fact. He is no fool but not an intellectual either. His tendency not to over overthink things is entirely intentional. Mako is known to occasionally reassert his dominance in the ranks by literally biting the heads off of his underlings. Mako considers Ghost Widow and Scirocco to be overly dramatic, while they both in-turn consider him barbaric. Black Scorpion thinks of Mako as a rival, a concept Mako finds insulting as he considers Black Scorpion to be an overgrown child. But Mako is not just on ill terms with his fellow patrons - he even has murderous intentions for Lord Recluse himself, intentions he has not acted on solely because he believes he would lose in a fight with Lord Recluse. Being a zealous Social-Darwinist, who applies the rules of survival of the fittest to himself as well as the world-at-large, Lord Recluse finds Mako's desire to kill him one day to be a healthy attitude for a patron of his organization and a good motivation to see to it he never gets complacent enough to give Mako any such chance.

The first power that Mako ever developed as a mutant was his ability to breath under-water; as a result, he has an affinity for swimming. Years spent swimming have paid off in combination with his later increasingly shark-like body and Mako can swim at great speeds that have been compared to military submarines. Mako also has a set of razor-sharp claws and teeth that can carve through tempered steel effortlessly. Mako's outer skin is a natural body armor and can withstand a high level of blunt force. His skin almost completely renders him immune to the elements, as extreme heat, cold and electricity do not conduct well through it. Mako's main line of defense is speed. His nimble reflexes keep him out of reach of most foes, unable to lock-in on him until he strikes. When Mako does strike, he puts all he has into the initial lunge, unleashing a more devastating bite than usual, which can take down even the strongest of foes in one hit; after this lunge, however, Mako is left especially vulnerable to attack as it takes him a few seconds to regain his momentum. Because of Mako's attack style, he may be vulnerable to multiple targets of considerable power but, in one on one matches, Mako is almost always guaranteed victory.

Mako over-sees Sharkhead Isle, regularly making unseen underwater rounds. During patrol Mako has encountered the Coralax, a group of merpeople that live in the grottoes beneath Sharkhead. The Coralax are normal humans infected with living coral grown by The Shapers. The Shapers are leaders of the cult of Merulina, a primordial leviathan goddess of the ocean depths. Mako discovered a Coralax named Kelli Forston, who had not been fully taken over by the Shapers' psionic control. Though still herself, Kelli's body was permanently warped into that of a Coralax and she had a case of slight amnesia. Mako brought the disoriented creature back to Arachnos with him to use for the study of the Coralax and to keep her as his lieutenant. Kelli has taken up the name Barracuda and continues to follow Mako, hoping to learn more about her mysterious transformation.

As of yet, Mako seems intent on keeping her in the dark to make use of her continued service to him. The Coralax display an ability to produce sudden bursts of water from their maws, launch icy projectiles, breath underwater, grow-out large blades of coral and use powerful psychic blasts. The Shapers can control all lesser Coralax, bend the living coral to their wills and infect humans with it, making them Coralax themselves. It has been said that if Mako ever let Barracuda get too close to the Shapers, she would become their slave like the rest of the Coralax. 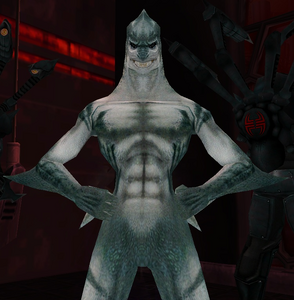 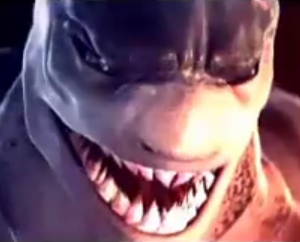 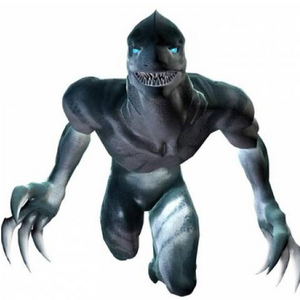 Add a photo to this gallery
Retrieved from "https://villains.fandom.com/wiki/Captain_Mako?oldid=3700595"
Community content is available under CC-BY-SA unless otherwise noted.