Villains Wiki
Register
Don't have an account?
Sign In
in: One Piece Villains, Military, Fallen Heroes,
and 21 more

Abusing his status to get whatever he desires

Tyrannizing everyone (initially failed after his defeat by Zoro)

Former Captain Morgan, called "Axe-Hand" Morgan since he literally has an axe for a right arm, is the first Marines officer of significant rank to be seen in the series. He is the third antagonist of the Romance Dawn Arc. After his defeat at the hands of Zoro, he was stripped of his status that he had been abusing for three years.

Morgan is an extremely tall, muscular man with tanned skin, blonde hair, and a steel jaw etched with the word Möwe (the German for "seagull"). As his epithet suggests, his right hand has been replaced with a huge steel axe, the handle of which is not only bolted through the bones of his forearm, but sticks out where his elbow should be.

Like most Marine officers, he wears a large, ornate overcoat. However, this coat notably lacks the "Justice" (正義) insignia, and is completely sleeveless; it is also worn conventionally, instead of being draped over the shoulders like a cape. His pants have the striped pattern of the Marine Bases and the Marine Battleships.

In peacetime, he can often be seen smoking a cigar.

After his defeat and arrest, Morgan was put into a standard striped prisoner's uniform, and shackled around the arms and legs. While he eventually rid himself of the shackles, the prisoner's uniform has remained his last known outfit to date. 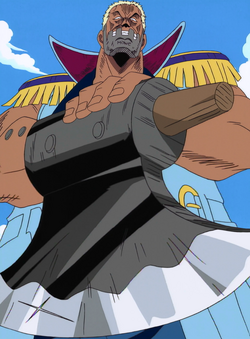 Prior to "capturing" Kuro, Morgan seemed to be a brave man who was not afraid of death. After his promotion, Morgan was corrupted by his power and became who he is today.

When Morgan is first introduced, he is governing over the small island of Shells Town, where his naval base is located. He is a cruel man who did little but spread terror on the town's citizens. He is ruling by fear, abusing his rank to make people pay taxes, and even going as far as killing his own men if they do not obey his commands. He has a very spoiled son named Helmeppo, who is almost as bad at using his father's rank to get what he wants from the island's inhabitants. Morgan shows no sort of fatherly love for Helmeppo, despite him thinking otherwise. Morgan's lack of love goes as far as stating that Helmeppo was a worthless son not even worth hitting.

Morgan's obsession with rank is proven in his battle against Luffy, where, despite not being able to land a single blow on the rubber man (and having taken several), he would not accept defeat.

As a Marine captain, Morgan had command over lower-ranking subordinates and citizens. He heavily abused this authority to get what he desired. He was eventually stripped of his rank and authority.

Morgan was durable enough, as he is the sole survivor of Kuro's wrath five years ago, although the reason for his survival was later revealed to be a plot planned by Kuro. He also has knowledge of Devil Fruits despite their rarity in the East Blue, and saw through Monkey D. Luffy's rubbery body as a result.

In battle, Morgan has a massive axe installed in place of his right arm, which was strong enough to slash through an entire fence with one swing through a shock wave and create a small fissure in the ground.

Five years ago, when Morgan was still a mere chief petty officer, he and his crew attacked the Black Cat Pirates one night, only to incur the wrath of their captain, Kuro. Morgan was the only survivor on board of his ship, which left him with a broken jaw and the loss of his arm. Refusing to beg for his life, Morgan challenged Kuro to bring him death. However, Morgan surviving the pirate's deadly claws was deemed impressive, and Kuro used Morgan as part of his plan to escape the pirate life. Morgan was hypnotized by Jango into believing that he had captured Kuro (actually a lookalike pirate), gaining him immediate fame and possibly setting him on the path to his current obsession with rank and power. While Kuro's assault broke his jaw, causing him to get his brace, it's unclear how or when he got his trademark axe hand.

He was left in charge of a Marine base on an island. As a high ranking and famous Marine, none dared challenge his authority, not even his own men as he had a habit of punishing those who disobeyed him (even killing his own men).

This all changes however when Luffy comes to town to help Coby fulfill his dream, and possibly recruit Roronoa Zoro into his crew. After Luffy accidentally breaks a newly finished statue of Morgan, the captain immediately sets after him, (considering that he was about to have one of his men killed for just scratching the statue, this is rather humorous as it occurs just as he was about to do the deed) confronting Luffy in the courtyard of the Marine base. Morgan is defeated by Luffy without even landing a single blow, though he is finished off by Zoro as Luffy has to deal with Helmeppo holding Coby hostage. Morgan is defeated by Luffy and actually finished by Zoro.

Morgan was later seen in the series in a chapter title page mini-story, as a prisoner stripped of rank on Vice-Admiral Garp's ship, where both Coby and Helmeppo also happen to be serving. However, Garp had suddenly fallen asleep and was slashed by Morgan, who escaped the ship by using his own son as a hostage. Helmeppo disowned him shortly thereafter and returned to the Marine ship, leaving Morgan alone and drifting on the ocean.

He was seen again as a cameo in Jango's Mini-arc taking a nap in the ocean as Jango unknowingly passes him. He has not been seen since.

Helmeppo was drawn before his father and early drawings of Morgan greatly resembled Helmeppo's own appearance. One example had him almost identical to Helmeppo, with just a crazier hairstyle. He was given his final design after the editor told Oda he looked lame.

Morgan's original name was going to be 'Captain Chop'. Oda explained that he did not have the nerve to actually use this name (his name also apparently was similar to a wrestling move by a famous Japanese wrestler called Giant Baba).

In the anime, Morgan is seen in his prison cell at the 153rd Branch Marine Base, when a marine soldier of the same branch showed him Luffy's $30,000,000 bounty. This scene did not appear in the manga.

While Morgan still retains his murderous tendencies in the 4Kids dub (ordering a marine to kill Rika, preparing to kill her himself after he refused, and almost killing another subordinate for denting his statue), when his men hesitated to attack Luffy and Zoro, instead of commanding them to kill themselves for disobedience, he instructed that they will attack, or else they'll have to "shake hands" with his ax-hand.