Command over the Triceraton fleet

Destroy the Earth and get revenge against the Kraang. (succeeded in the original timeline, then reversed and failed)

Not much is known about Mozar's past, except he was a loyal soldier to the Triceraton Armada, having risen up the ranks in his efforts during the war ebtween the Triceraton Empire and the Kraang Hive Mind, led by Kraang Prime. During the war, he suffered multiple injuries, having lost part of his horns, lost his eye and has some major battle scars that lead to him needing a metal piece to replace his upper jaw, with his nostrils also being disfigured. Eventually, he lost his own planet to the Kraang's new device, the Heart of Darkness/Blackhole Generator, which sparked vengeance upon the Triceratons. As Mozar rose up the ranks, Mozar also became more callously abusive to his own men.

Mozar makes his debut receiving the signal from Zog's on where the Krang's secret base is, with orders from Emperor Zanmoran to destroy it. Immediately leading the Triceraton fleet to Earth, Mozar makes a live broadcast to all television screens on the planet to announce his presence and inform them about the existence of the Kraang, before ordering the destruction of the Technodrome, killing Kraang Prime and Kraang Subprime in the process. He then has the Heart of Darkness set up on Washington Square and has dispatched men to activate it. Eventually, he has Mikey captured for information, having attempted to use the Psionic Extractor to shatter his psyche to know about the location of the Kraang. Eventually, the other Turtles come to free Mickey but were captured and brought to him. Donnie begs Mozar to spare the Earth, which Mozar refuses, using the pollution of the planet as an excuse to continue his plans to destroy it. Mozar then orders their execution to be thrown out of the airlock, but before that, Leo threatens to destroy Mozar if he doesnt spare the Earth. Mozar, dismisses it as an empty threat, which it wasn't as Leo then grabs a Triceraton teleporter to toss it at the glass and create a hole that sucks many Triceratons, to which they use as a distraction to escape and prevent the Blackhole Generator from being activated. Unfortunately, they fail thanks to the Shredder and the Blackhole generator was set up, leading to the destruction of the planet. Mozar watches and baskes in his victory as he shots "Long Live the Triceraton Empire" before teleporting away.

Eventually, immediately after the destruction of the Earth, the Turtles, who were rescued by Fugitoid, travel back in time 6 months before the destruction of the planet to prevent the tragic event. Eventually in "Moons of Thalos 3", the Ulixes, the Fugitoid's ship, ran into a battle btween the Triceraton Empire and the Salimandrians. Upon seeing the ship, Mozar orders it destruction, causing it and the ship with Commander G'Throkka and Y'Gythgba.

Mozar eventually returns to seize the first fragment of the Heart of Darkness from the planet of Xaava-Dal. Due to the planet's dark athmosphere, they were forced to use the Raptor Fighters to get to the surface. Upon getting to the surface, the negative influence over the planet has affected Mozar, slowly succumbing to it as he becomes increasingly more agitated and enraged at his minions to the point of planning to straight up shoot them for their "incompetence", until Lieutenant Zovox detects the Turtles. With this, Mozar and his lackeys follow the Fugitoid, the Turtles and the team to a temple, locating the first fragment of the Heart of Darkness. Using his men to distract the team, Mozar retrieves the first fragment and seals the team inside the temple while he and his men escape with the fragment to deliver it back into the mothership. Due to this, Emperor Zanmoran rewards him by promoting him to the rank of admiral.

During his brief tenure as admiral, Mozar discovers that the Turtles invaded the Triceraton Mothership and had them promptly overpowered and captured, before tossing them to an airlock chamber to have them executed, intending to slowly suffocate to see them suffer before opening it fully when the Turtles use ninjitsu to reduce their oxygen intake. The execution was promptly halted by Emperor Zanmoran, who wants them to fight in the Triceraton Arena upon being impressed by his skills. Despite Mozar's disapproval on letting them live, he promptly obeys his master's orders. Mozar was overall dismissive over the Turtles' skills, dismissing their victor in defeating the Spasmosaur as just beginner's luck. He was then immediately informed about Casey, April and the Fugitoid's presence in the ship.

The former 2 managed to escape, but the Fugitoid was eventually captured and brought to the Emperor, who blackmailed him to help them assemble the Blackhole Generator in exchange for the Turtles' lives. However, upon the Arena Champion, Zeno, rebels against the Emperor, Mozar was eventually caught off-guard and the Turtles have taken the Emperor hostage. Forced to free the Fugitoid and the Turtles to save the Emperor's life, Mozar immediately pursuits them, in which the Emperor declares them enemies of the Empire and there is nowhere in the 10 dimensions where they can hide. The Turtles eventually collide with April & Casey, who have the first piece of the Heart of Darkness, forcing the soldiers to ceasefire under the fear of shooting the Emperor instead. The Emperor orders them to forget about him and get their enemies, to which mozar orders them to continue firing. Using April's psychic powers, the team flee to the Ulixes to flee, to which Mozar sends multiple Raptor Fighters to pursuit them, but the ulixes escapes, placing their plans to destroy the planet the Kraang are hiding in behind schedule. Due to Mozar's failure, the Emperor promptly demotes him to a Captain.

In order to recover from his humiliation and aware of the Turtles having found the second piece, Mozar has his forces ambush the Ulixes to retrieve the 2 fragments, threatening the destroy them if they don't surrender the pieces. The Turtles refuse, to which Mozar orders a brutal assault against them while giving them a 3 second headstart, ordering their deaths through the use of meteor missiles and planet busters which destroyed a moon. Angered tha tthe Turtles are defeating his fleet, he then ordered the use of a Rock Rocket with the Skeevax virus inside, much to the hesitation of his own men as it was illegal in 2,000 star systems, to which Mozar coldly threatens to send him along with the virus and kill him if he refuses. While the virus doesn't begin eliminating their enemies and the Ulixes using it's cloaking mechanism, Mozar orders them to bombard throughout the Nebula they are hiding in to force them out as his blood-lust increases. When the Skeevax virus was thwarted, Mozar quickly changes his plans by infiltrating the Ulixes to retrieve the Blackhole Generator pieces before obliterating it, much to its success as now both pieces are now in his possession. However, Mozar spares his enemies when they escape, satisfied with his reclaim.

As the Turtles proceed to find the final fragment of the Blackhole Generator on the planet of Magdomar, Mozar also heads to the same planet with hopes that by finding the final piece and the other 2, he can redeem himself in the Emperor's eyes and become an Admiral again, and maybe even more, before ordering asearch team to descend to the surface and find the piece. Eventually, Lord Dregg contacts Mozar, much to his disgust, who offers a partnership in finding the Blachole Generator and eliminating the Turtles in exchange for 40 million Zemulacks, which Mozar accepts. Later, Mozar personally beams don to the surface to the lead the retrieval of the final fragment when Dregg's intel proved useful, before engaging the Turtles after Chompy Picasso made a roar that gave away their position. He then equips iwht his jetpacks to fight Tokka till the very end, ordering others to stand down and fight even if they die, and ordering his Raptor Jets to fight Tokka and retrieve the fragment, while callously telling them they would've paid the ultimate price for failure have they died. Eventually, Dregg steals the fragment and orders Mozar for ransom and a larger sum of Zemulacks, to which the annoyed Mozar begrudgingly accepts, as he allows Dregg's ship, the Hornicon, to dock to the Triceraton mothership as Mozar orders planet busters at a star to cause a supernova that would presumably kill Tokka. Mozar then lures Dregg to an airlock where he lies that is where his 50 million Zemulacks are present, to which Mozar callously betrays him as thanks for helping him get the final fragment. Eventually, with the Blackhole Generator assembled, he gets a beacon from Sergeant Zog on the location of the Kraang's secret base. Mozar then rubs his victory on the heroes as he hacks into the Ulixes' communication to announce his intent to use the weapon against Earth, much to everyone's horror.

As the Triceraton mothership arrives to the Milkyway Galaxy near Saturn, Mozar proclaims his intentions to annihilate Earth once and for all, to which Leo take son the entire Triceraton fleet solo to stop them, but before he can destroy the Bridge, the Raptors badly damage the ship and leave Leo to suffocate as his helmet cracks, while Mozar orders the destruction of the Ulixes, which causes it to crash on Mars. As the Ulixes repairs itself and recovers Leo, Mozar already detached his destroyer from the flagship as he destroys the Technodrome and orders Raptors to place the Blackhole Generator in Washington Square and sends engineers to arm the detonator. However, he then sees the past versions of the Turtles and their allies battling his troops, much to Mozar's confusion on how they even beat him to Earth, and orders Mickey to be abducted like before, to interrogate him and the Turtles, asking if they recognize him, much to its failure. Mozar then realizes they are all past versions of the ones he already encounters and that he has actually succeeded beforehand. He eventually beams down to Washingotn Square when present Leo disarms and fries the Detonators, to which he faces of the past and present versions of the teams, but was ultimately overwhelmed and defeated. Enraged, Mozar beams to the destroy and attaches it to the Mothership, ordering it to activate the Devastator to raze the entire city of New York and retrieve the Blackhole Generator from its ashes to detonate it again. However, before he could, he witnesses Fugitoid taking the Blackhole Generator and sacrifices himself to combine the dark matter powering his ship and the energy of his fusion core to cause an explosion that wipes out both the Blackhole Generator and the Triceraton Mothership, to which Mozar couldn't do anything but watch in horror before being obliterated to death. 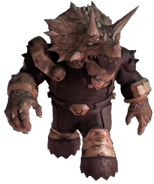 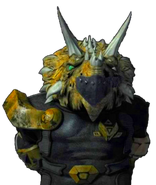