Captain Orchis is a mentioned character in the 1972 book Watership Down and the secondary antagonist of it's 2018 miniseries. He is an officer for a rabbit warren called Efrafa.

He was voiced by Jason Watkins, who also played William Herrick in Being Human.

In the original book, Orchis is mentioned to have once found another warren, which was destroyed by Efrafa's chief rabbit General Woundwort.

Unlike the book, Orchis plays a larger role in the 2018 miniseries, serving as the secondary antagonist.

In this adaptation, Orchis is the brother of Vervain.

Orchis is first seen on a Wide Patrol with other Efrafan rabbits, where he captures three male rabbits named Holly, Bluebell and Blackberry and brings them to Efrafa.

After Vervain is killed by a train whilst attempting to stop Holly, Bluebell and Blackberry from escaping Efrafa, Orchis wishes to kill an Efrafan doe named Hyzenthlay because she helped the trio escape. However, Woundwort tells him that Hyzenthlay is a source of inspiration for Efrafa's females, so he will not kill her but break her.

Taking the General's advice, Orchis summons Hyzenthlay to his burrow and gives her the offer of spying on other rabbits that wish to escape Efrafa and gives her time to think about. Later, Orchis confronts a new member of Efrafa named Bigwig over causing the leading a fox towards a Wide Patrol led by another Efrafa officer named Campion, though it was actually an accident. Unbeknownst to Orchis, Bigwig is actually working undercover at Efrafa to liberate the does and bring them to Watership Down as they need more females.

Afterwards, Hyzenthlay returns to Orchis and tells him that she will spy for him if only the other does have better conditions. However instead, Orchis orders for Hyzenthlay to be executed and says that he already has spies (one of which is later revealed to be Hyzenthlay's friend Nettle, who did it as Orchis threatened to hurt the other does if she refused). When questioned by Hyzenthlay on why he asked her in the first place, he reveals that he had been ordered by Woundwort to break her spirit. He then states that it was disappointingly easy.

On the lead up to Hyzenthlay's execution, Orchis chooses Bigwig to be the executor. However, Bigwig instead escapes Efrafa with Hyzenthlay, Clover and several other rabbits and brings them to Watership Down.

Orchis accompanies Woundwort and the other Efrafan officers to launch an attack on Watership Down. When Campion refuses to participate in the battle anymore, Orchis is ordered by Woundwort to kill Campion. However, Orchis backs down as he is no match against Campion.

Later in the battle, Watership Down's chief rabbit Hazel leads the guard dog of Nuthanger Farm to Watership Down. Orchis is amoung the rabbits to be killed by the dog.

Orchis with his brother Vervain. 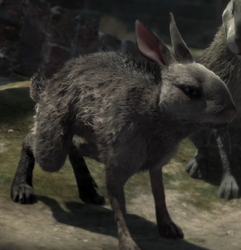 Orchis being mauled to death by the guard dog of Nuthanger Farm.
Add a photo to this gallery

Retrieved from "https://villains.fandom.com/wiki/Captain_Orchis?oldid=3364947"
Community content is available under CC-BY-SA unless otherwise noted.