Captain S. Putty is one of the three secondary antagonists (alongside Jimmy the Polar Bear and Bob the Viking) of the 2022 Disney+ hybrid film Chip 'n Dale: Rescue Rangers, which serves as a "meta" continuation of the 1980s classic animated show of the same name.

He is a Gumby-style claymation character who works as a police detective, being the superior of Ellie Steckler, a police officer who wants to help Chip and Dale to rescue Monterry Jack, one of their old castmates, from the clutches of the Valley Gang. However, it later turns out that Captain Putty is in cahoots with Sweet Pete, being a willing accomplice of Pete's bootleg film operation.

Captain Putty has a blue clay body with a brown hair, a mustache, red eyebrows, and a red line for a mouth. He dons a white shirt, a dark tie, and a brown hat.

Captain Putty is a short-tempered and dutiful police officer. Being at the top, he takes his job seriously and gets easily agitated when any minor inconvenience stymies him. However, he is revealed to be very manipulative and even mischievous to a certain degree. He is quick to make jokes and poke fun at those who he feels are beneath him, particularly Ellie Steckler for a botched raid, though this is revealed to be the result of Putty misleading her, showing that he has no remorse for his actions and enjoys doing emotional damage to others.

When he was seemingly a hero, he was able to get fingerprints onto his clay body and slice the portions off so they can be analyzed.

When attacking Ellie, he banged her head between cymbals.

In an off-screen moment, Sweet Pete invites Captain Putty to join his criminals cash in exchange for cash, even though he knows this was a cliché, Putty accepts to be part of the gang.

During the entire movie, Putty manages to cover up Sweet Pete's tracks by giving his officers false leads, such as once he lied that Peppa Pig was kidnapped by Nick Jr. Studios. and they ended up getting attacked by the Paw Patrol.

In the end, Putty was arrested and seen in jail along with the other villains in the post credits. 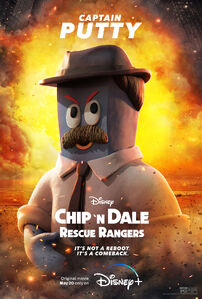 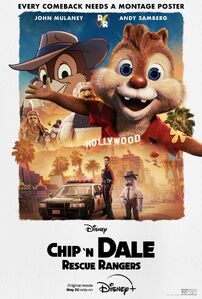