Space Quest V: The Next Mutation

Operational commander for the G6 Quadrant

Woo Ambassador Wankmeister enough for her to fall in love with him.
Turn everyone in the universe into Pukoids.
Kill Roger Wilco to prevent him from alerting Starcon (all failed).

Captain Quirk was the main antagonist of the action adventure videogame Space Quest 5: The Next Mutation.

Captain Quick began as an arrogant bully who sought make Roger's life a misery, he also enjoyed abusing his authority such as when he had Cliffy imprisoned for a scuffle in with one the members of the Goliath insulted the crew of the Eureka for being mere garbage collectors.

Captain Quirk had hopes of having a romantic relationship with Ambassador Beatrice but was not much of a lady's man, being quite chauvinistic - he was also illegally dumping toxic waste on populated planets as part of a conspiracy with Genetix. Captain Quirk's ship (the Goliath) would later be attacked by mutants and he was transformed into a mutant himself and headed towards Starcon with the intent of mutating all creatures in the galaxy into monsters like he was

Ultimately Roger managed to enter the Goliath and with Cliffy managed to cure most of the crew of their horrible mutation, however Captain Quirk escaped in a shuttle and flew straight into a large mass of mutagenic sludge, transforming into a colossal monster that began to terrorize the galaxy. Roger had the Eureka fire on the now monstrous Quirk but the weapons had little effect on him, thus Roger used the ship's vacuum to suck Quirk into a containment cell.

Knowing the containment cell couldn't hold Quirk for long Roger activated the Eureka's self-destruct program and made his escape, taking the Goliath to Starcon to tell them what had transpired - as the Goliath flew to safety Captain Quirk was seemingly destroyed as the Eureka exploded violently in space.

Captain Quirk started as a demented and cruel bully willing to demean anyone's hard work. After becoming a Pukoid, he went from cruel to horrendous as he wanted everyone in existence to become an abomination and showed intense sadism in how he enjoyed the though of killing the crew of the Eureka. 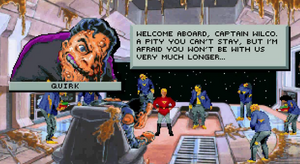