Dramatically boasting about being a hero and the qualities that he possesses.

Running away from danger.
Finding something to shoot at.
Making up cool one-liners.

Gain fame and fortune and to preserve his reputation by defeating Ratchet and Clank (formerly, failed).

Protect the galaxy and the rest of the universe (currently, succeeded).

Copernicus Leslie Qwark, better known as Captain Qwark, is the anti-heroic tritagonist of the Ratchet & Clank franchise. He was one of the archenemies of Ratchet (alongside Dr. Nefarious, Emperor Tachyon, and Ace Hardlight).

To the public, he appears to be the greatest superhero in the universe, but in reality is a fraud that will do whatever it takes to maintain his fame and reputation or for money. Initially, he is an antagonist in the first two games, but in the third onwards he became a protagonist, despite still being a coward and imbecile. Qwark is the tritagonist of the Ratchet & Clank feature film and PlayStation 4 game, but briefly an antagonist until he reforms.

He was voiced by Jim Ward in all games up to Ratchet & Clank: Into the Nexus, with Scott Whyte taking the role in Ratchet & Clank: Rift Apart when the former (Jim Ward) had developed Alzheimer's disease and suffered from COVID-19, leaving him unable to do anymore voice work. Jim Ward also played Emperor Otto Destruct in Ratchet and Clank: Size Matters, as well as Torrance in Disney's Treasure Planet, Sheshou in Disney's Mulan, and Krackus in My Life as a Teenage Robot.

Qwark is the secondary antagonist in the original Ratchet & Clank. Ratchet and Clank travelled the Solana Galaxy trying to find the hero, believing that he will help them save the galaxy from Chairman Drek's evil plans. They find him in his trailer in Blackwater City, and he tells them to meet him at his gauntlet on Umbris. They pass the course, but are betrayed by Qwark, who reveals he is the highly-paid spokesman of Drek's new planet. Qwark attempts to kill them with his Blargian Snagglebeast, but then failed to do so. Drek reprimands Qwark over his failure to kill the duo, but gives him a second chance.

Drek eventually told Qwark to go to the Gemlik Base and confront them personally using a Blarg starfighter, and Qwark battled Ratchet through space but was defeated and shot down on the planet Oltanis, which resulted in Drek firing him. Ratchet then meets Qwark again on the heavily bombed planet, and Qwark sells him the P.D.A. under the name Steve McQwark.

Qwark returns as the main antagonist in the sequel Ratchet & Clank: Going Commando. After his defeat at the hands of Ratchet and Clank, Qwark tried to gain fame by selling a device called the Personal Hygenator; however, the device caused harm to its users, and Qwark was forced to pay six billion dollars to the users. Qwark tried to escape to planet Pokitaru, but was arrested and placed in jail. He escaped again by flushing himself down a toilet and wasn't seen for 6 weeks. Qwark wasn't seen until the end of the game where it is revealed that he had used his alter-ego (Steve McQwark) to help finance his big comeback by selling the Personal Hygenator. He then managed to gain control over Megacorp by pretending to be CEO Mr. Abercrombie Fizzwidget and locking the real Fizzwidget in a broom closet.

Qwark then hired Ratchet and Clank to recover the "Experiment" that was stolen by Angela Cross, and abandoned the two after it was returned to him. He then released the experiments across the galaxy, leading to them violently attacking their owners and citizens in general. Mega Corp eventually became wary of "Fizzwidget"'s abnormal behaviour and hired Thugs-4-Less to protect him. The Thugs framed Ratchet and Clank for an attempt on his life and imprisoned them. Eventually, he revealed his true identity and went live on holovision where he tried to fix the the Experiment, now called the Protopet, to make himself look like a hero and incriminate Ratchet for starting the crisis. However, the Helix-O-Morph he took from Angela backfired, and the Protopet turned into a giant monster and ate Qwark. The duo managed to defeat the beast, and Qwark was spat out. In the final cutscene, he is seen working at Megacorp as a test subject for the Crotchitizer. Following this, the next few games state that Qwark has a strange addiction to the Crotchitizer.

Between Going Commando and Up Your Arsenal

At some point, Qwark somehow returned to Solana Galaxy and resided on planet Florana, where he was raised as a child, with cyclops monkeys.

Ratchet & Clank: Up Your Arsenal

When Dr. Nefarious attacked the Solana Galaxy, President Phyronix requested Ratchet and Clank track down the Florana Tree Beast advertised in Nature's Mysteries, which was Qwark, as Qwark was the only man to have faced Nefarious and lived. When they found the masked man on Florana, he made Ratchet and Clank walk the Path of Death, his identity was revealed and fought the duo. After he is defeated, it became apparent he had lost his memory and believed he was a monkey, leading the two to escort him back to the Starship Phoenix where he was briefly housed with his monkey friend Skrunch. After Ratchet completed a Qwark vid-comic in front of him, Qwark regained his memory and founded the Q-Force, a team consisting of himself, Sasha Phyronix of the Starship Phoenix, his former fitness instructor Helga, racer Skidd McMarx, Big Al from the Roboshack he had formerly endorsed in his career, Skrunch, Ratchet and Clank. At this point, he was no longer a threat to Ratchet & Clank, redeeming himself, but remained focused in his goal to keep his heroic reputation high. 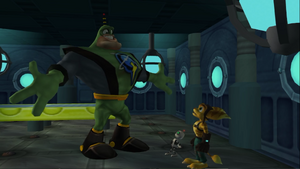 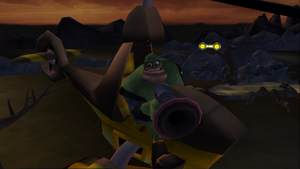 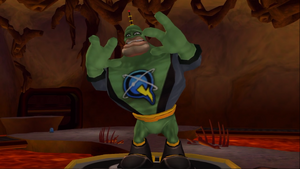 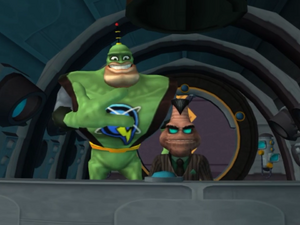 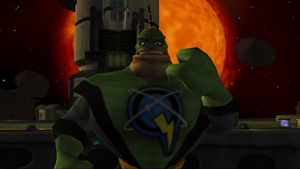 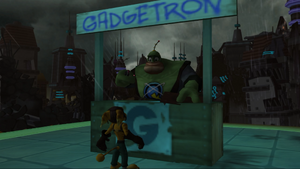 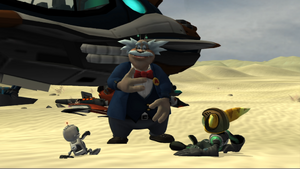 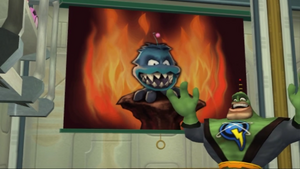 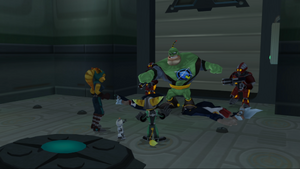 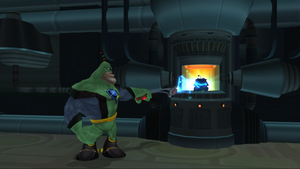 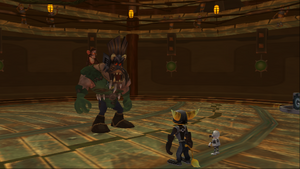 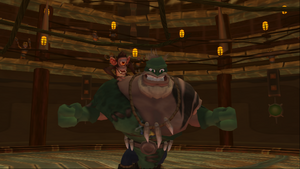