Caring for his "Mother".

Nuking Mega-City One.
Abusing his crew.

Hijack Hans Hass to kidnap the scientists so they will build nuclear warheads for him (succeeded).

Nuke Mega-City One for his own amusement (in reality under remote control of Nikita Kramm, succeedes but the agent was discovered).

Captain Skank was a villain in the 2000 AD comic strip Judge Dredd. He was the main antagonist of the storyline "Pirates of the Black Atlantic". He was a psychopathic mutant pirate who nuked Mega-City One which caused over four million of death.

The Hijack of Hans Hass

In the year 2103, in a sea fortress that was abandoned after the Atomic Wars, at the bottom of the polluted Black Atlantic, Captain Skank and a group of other mutant pirates hijacked a Mega-City One research vessel called Hans Hass and Skank orders his crew to leave the scientists alive but kill the rest. The pirates slaughters the rest of the crew (including throwing some into the Black Atlantic which kill you without protective clothing) and one of the mutant pirates was about to kill a scientist until Skank kill him for disobeying his order and Skank orders his crew to take the scientists back to there base with them (including Jenno Matryx, the nuke boffin). When the Justice Department patrol ships arrived they only found corpses on the ship but couldn't find any of the scientists. In Justice Department, the Judges are alarmed about the incident and place Dredd in charge of the Atlantic division. In the sea fortress, Captain Skank tells Jenno he has 500 missiles and none of them work unless she builds for him new warheads, she refuses so Skank introduced her to his "Mother" (who is a giant mutated squid) and feeds several of the captured scientists to Mother and he threatened to feed the rest if she doesn't comply and she agrees and Skank puts her to work and announces how he'll challenge the might of Mega-City One.

The Nuking of Bob Oppenheimer Block

In the sea fortress, Jenno has just finished building thirty new warheads and demands Skank to keep his promise and let her colleagues go. He tells her he'll do that since theirs bigger fish in the sea and Skank orders his second in command, Tuskarosa to prepare to nuke Mega-City One which horrifies Jenno and she begs him not to do it but he just mocks her and they fire the nukes. In a Justice Department ship near Cuba, Dredd and the other Judges detect nuclear missiles heading for Mega-City One and the Laser Defence Teams in Mega-City One along the Atlantic Walls and they manages to shoot down all but one of the nuclear warheads, which nukes the Bob Oppenheimer block which kills over four million innocent people and numerous more wounded from the radiation. At the nuclear cloud mushrooms above the city, Weather Control immediately move in to deal with the fallout. Jenno completely despairs the fact she helped Skank so was partly responsible for the disaster. On the Black Atlantic, Judge Dredd begins a mission to go the sea fortress to deal with the mutant pirates.

The pirates detect the Justice Department submarine and start firing missiles at it but they managed to take evasive action and destroy the missiles and the scanners which leaves the pirates sea fortress open to attack. They blow open the fortress's missile hatch and storm into the base and Tuskarosa informs Captain Skank about the attack but he says he'll deal with them after he feeds his mother and Tuskarosa decides that Skank has served his 'purpose' and tries to escape. The Judges were heavily outnumbered but thanks to their training they managed to make the battle go in their favour and they killed numerous mutant pirates. They try to take cover but the Judges throw the riot gas which stuns them and the rest of the pirates escape into escape pods. Dredd tells the other Judges to shoot down the escape pods while he deals with Captain Skank and the Judges use the mutant pirates own weapon against them and shoot down all of the escape pods. Dredd looks for Skank but gets caught and trapped by Skank's metal tentacles but he manages escape and tells Skank for crimes against humanity he's sentenced to death and he calls his Mother who breaks through the fortress's walls.

Mother starts to grab Dredd with her tentacles and was about to ripe Dredd limb by limb but he manages to get his boot knife and chop off one of the tentacles but finds there is too many of them so he throws his knife at a power cable which electrocutes Mother and Skank after he tries to help her and kills them. The Judges manage to capture the fortress and Dredd angrily berates Jenno for choosing her colleagues over the millions of lives lost and orders her to be taken away. He then says he's puzzled as to why Skank nuked the city since he must've knew they would have caught and destroy him. Giant tells Dredd maybe Skank didn't make the decisions and shows Dredd Tuskarosa's remote control which controlled Skank and med bay say his Tuskarosa's mutation was artificial. In the fortress's med bay they discovered the tusks and the skin were fake and find out that it's actually Nikita Kramm, one of East-Meg One's top agents. After Dredd returns to Mega-City One (having a look at the ruins of the nuked sector on the way) and a emergency meeting of the Mega-City Security Council about East-Meg One's responsibility. Dredd said there's only one course of action to take and Chief Judge Griffin tells him to take it to give East-Meg One a message that Mega-City One is prepared to defend itself. In East-Meg One, a Justice Department ship deliver a coffin and when s Sov-Block Judges look in the coffin they find Nikita Kramm's corpse and a message from Dredd warning them there missiles are prepared and they await their response. The leaders of the Sov-Block Judges are alarmed and say how they are not prepared for a war with Mega-City One yet so Supreme Judge Josef Bulgarin (who was unnamed at the time) decides Mega-City One must be appeased and nuked their own sector as compensation. In Mega-City One, Dredd says that although nothing can make up for the four million lives lost, they have to accept it unless they want an even worse nuclear holocaust. Dredd then says they need to have a good look at the defences since sooner or later East-Meg One will feel strong enough to attack and the solution won't be as simple.

Skank was a cyborg whos his hair is long cybernetic dreadlocks with claws attached on the end. He was missing his right eye and had replaced his left one with a gleaming cybernetic one.

Captain Skank was a completely insane and antisocial man who gleefully nuked Mega-City One for no reason other than enjoyment (in reality it's because he's being controlled). He has no problem with killing his own crew for disobeying orders and gleefully fed several of the captured scientists to his "Mother". He did, however, adored his Mother and regularly fed her and took care for her, and even strangely didn't kill the Mega-City One scientists after Jenno built the warheads although it's most likely due to him being excited about nuking the city. 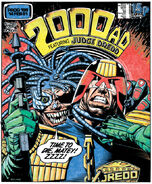 Add a photo to this gallery
Retrieved from "https://villains.fandom.com/wiki/Captain_Skank?oldid=3700611"
Community content is available under CC-BY-SA unless otherwise noted.